While there is enough room for average-sized adults in the back of the Kwid, the S-Presso’s rear seat can host two six-footers in good comfort. 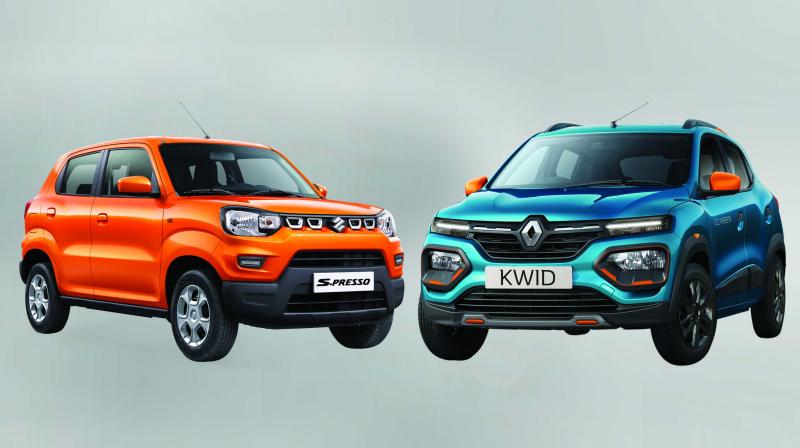 In the battle between two ‘almost SUVs’ — the Maruti Suzuki S-Presso and the Renault Kwid — both vehicles happen to be the winner.

The runaway success of the ‘SUV-inspired’ Renault Kwid in the fiercely competitive hatchback battle came as a wakeup call for the market leader Maruti Suzuki, which ruled the roost till then. But Maruti S-Presso mini-SUV is the company’s long overdue answer to the Renault Kwid. So, which one’s the better hatchback?

While Maruti Suzuki had virtually no rival for decades in the budget car segment, the arrival of Renault Kwid in 2015 rocked Maruti’s boat. With the Kwid, rival Renault successfully sent a signal to the market that a budget hatchback need not be a basic hatchback. So the Kwid was loaded with class-first features, like a touchscreen and digital speedometer and its unmistakable SUV look.

Interestingly, Maruti launched the S-Presso on Sep 30, and Renault introduced the facelifted Kwid the next day on Oct 1, to woo buyers.

Both the S-Presso and Kwid flaunt their SUV look to the hilt. With its upright pillars, flat bonnet and relatively high roof, the S-Presso has a more SUV-like shape. But overall, the styling does not really catch the eyes. The toothy front grille and the cladding lower down work well but the sides and tail are far too plain. The Kwid, however, is a handsome car. It has got classic hatchback proportions and the updated stance includes the upsized 14-inch rims, and its ground clearance is up 4mm to 184mm, versus the S-Presso’s 180mm.

Also, the restyled front end of Kwid features a new-age split headlamp set-up, with standard-fit LED DRLs on top and the main headlights lower down, and the result is really eye-catching. The chunky surrounds for the large headlights are also well done, while the orange accents on the bumper add flair to the Climber variants’ appearance.

Both cars maintain their exterior looks on the inside as well. The S-Presso’s centrally stacked instruments are cool and nice. With the high front seating, both the passenger and the drive get a good view of the outside and make everything easy. But you actually sit much lower in a Kwid, and the initial impression is also of sitting in a smaller car. Overall, the Kwid cabin does not feel as airy as the S-Presso’s. But the Kwid’s updated cabin is refreshingly cool, the dashboard is revised, the touchscreen is larger, and the new part-digital dials include a tachometer too. However, overall cabin quality is not that great. The Kwid’s plastics are scratchy and not as nice as the textured surfaces in the S-Presso.

While there is enough room for average-sized adults in the back of the Kwid, the S-Presso’s rear seat can host two six-footers in good comfort. Vertical space has been used to the fullest to maximise useable room. There is ample headroom, knee room and good shoulder room too. Also, rear-seat occupants can sit more comfortably in the S-Presso. The slight knees-up seating position in the Kwid gets tiring on long journey, but the Climbers do get a class-first rear centre armrest and that does up the comfort to an extent.

When it comes to storage space, both the cars offer good spaces with bottle holders at the front doors and smaller recesses on the dashboard. The Kwid’s cavernous glove box is larger though, while the S-Presso is the only one to offer a bottle holder for rear seat passengers.

The power steering, remote locking, and front power windows are standard on the top-end versions of both cars, but only the Kwid offers rear power windows for an extra `8,000. Also, while digital speedometers are common on both models, a tachometer is exclusive to the Renault. The Kwid is also the only one with a reverse camera.

The Maruti, on the other hand, goes one-up with steering-mounted audio controls and internally adjustable mirrors. As for infotainment systems, the Kwid’s new 8.0-inch touchscreen is a size larger than the S-Presso’s 7.0-inch unit, though both screens are equally slick and come bundled with Android Auto and Apple CarPlay.

The S-Presso’s BS6-compliant K10 engine is tractable and delivers its power in a smooth manner. The engine is also refined. It is free from undue vibes, runs quiet and only gets vocal when you rev it hard. A light clutch and smooth-shifting gearbox only enhance the experience.

The Kwid’s engine is a bit noisier and low-speed power delivery is not quite as crisp. So, you have to work the Kwid’s gearbox more in town. However, build up the revs, you begin to appreciate the Renault engine’s responsiveness and zesty nature. The trade-off is that you have to contend with a lot more noise from the Kwid’s engine bay. Perhaps the inevitable upgrade to BS6-specification will make the engine smoother and quieter.

Which One to Buy?

On the whole, the S-Presso priced in the `3.69 lakh and `4.91 lakh range comes across as a more rounded product. It is more spacious with a better finish inside, has the quieter engine, and happens to be a nicer car to drive. But it lacks some of the frills that you get on the Kwid priced `2.83 lakh to `4.84 lakh. The updated Kwid only builds on the original’s strengths of the popular budget hatchback.