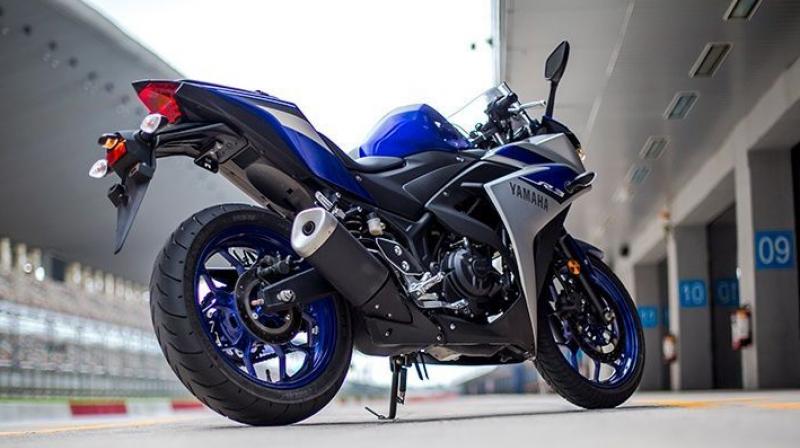 Updated version of the Yamaha YZF-R3, which is priced at Rs 3.48 lakh (ex-showroom Delhi), now features a BSIV-compliant engine and ABS.

Yamaha launched the YZF-R3 with a BSIV-compliant engine at the Auto Expo 2018 today. The older version of the bike had to be discontinued in April last year as it failed to adhere to BSIV emission norms. Along with the updated engine, the new 2018 Yamaha R3 also gets dual-channel ABS and Metzeler Sportec M5 Tyres as standard.

The Japanese two-wheeler manufacturer has set a price tag of Rs 3.48 lakh (ex-showroom Delhi) for the motorcycle, this is an increase of Rs 23,000 over the older generation model, which retailed for Rs 3.25 lakh (ex-showroom Delhi). This price hike certainly is worth it, considering that now you get a dual-channel ABS unit and Metzeler sport tyres as standard.

In terms of design, the YZF-R3 continues to look sharp and edgy, which will appeal to the masses just as the older version did. The twin cat-like headlamps, full fairing, clip-on handlebars and the sporty tail section remind you of the larger sportsbikes from Yamaha’s stable. The semi-digital instrument cluster has been retained as well.

The BSIV-compliant 321cc, liquid-cooled, parallel-twin engine produces 42PS of power and 29.6Nm of torque and is mated to a 6-speed gearbox. The bike continues to sport telescopic front forks and a monoshock unit at the rear. It also gets disc brakes at the front and the rear. The company now offers dual-channel ABS as standard.

Other major updates include a switch from MRF tyres to Metzeler Sportec M5 tyres. The motorcycle is also 3kg heavier than its predecessor that weighed in at 167 kg, but that shouldn't put a major dent in its performance.

The Yamaha YZF-R3 will go up against the Kawasaki Ninja 300, the DSK Benelli 302R, TVS Apache RR 310 and the KTM RC 390. Stay tuned our social media channels for more updates from the Auto Expo 2018.