Toyota has updated its best-sellers based on customer feedback, which has led to a price hike as well. 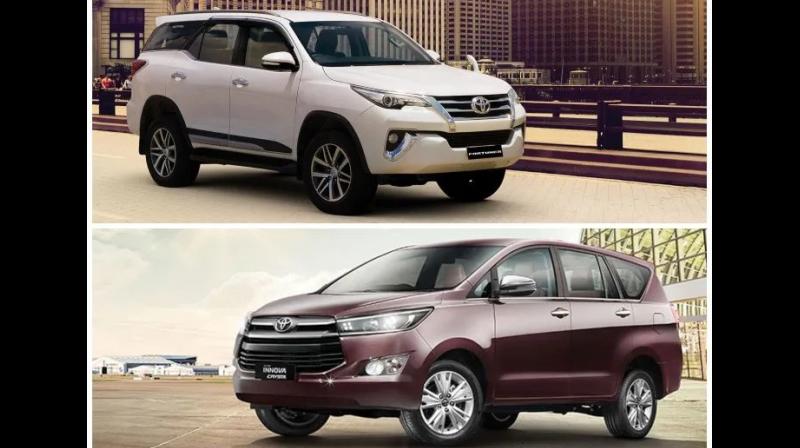 The updates are limited to the diesel variants of both cars. Both models get new interior colour options. Innova Crysta gets a few feature additions like a USB fast charger and heat rejection glass.

Toyota has updated its two bestsellers, the Innova Crysta and the Fortuner. The changes are limited to interior colour options and the feature list. Toyota says it made the changes after listening to customer feedback. The update has also led to a price hike for both models as well.

Toyota’s best sellers, the Innova and Fortuner, have been updated with new interior colours and additional features for 2019. The updates have been carried out after listening to customer feedback. This has also resulted in a price hike for both models.

The 2019 Innova Crysta can now be had with an optional “Ivory” perforated leather seats with the ‘Crysta’ insignia on the top-end ZX variants. Feature additions on the Innova Crysta include heat rejection windows, USB fast charger on the V and Z variants. These updates are limited to the diesel version only. The Innova Crysta Touring Sport diesel gets the same feature updates as well. The Innova Crysta also gets a 360-degree camera as an official accessory now. The additions have led to a price hike of Rs 10,000 to Rs 24,000, depending on the variant. Check out the updated prices below:

As for the burly Fortuner, it gets minimalistic updates limited to the diesel variants. The Fortuner can now be had with a lighter ‘Chamois Brown’ perforated leather interior apart from the earlier Dark Brown option. You also get heat rejection glass as seen on the MPV, but surprisingly it misses out on USB fast charging. And just like the MPV, you get to equip your Fortuner with an all-new 360 degree camera as well. The changes have led to a price hike that ranges between Rs 25,000 to Rs 32,000, depending on the variant you pick.

Mechanically, both the 2019 Crysta and the 2019 Fortuner remain unchanged. The Innova Crysta MT is powered by a 2.4-litre diesel engine where as the AT variant is powered by a 2.8-litre diesel engine. The former produces 150PS and 343Nm while the latter produces 173PS and 360Nm. The Fortuner MT and AT employs the same 2.8-litre diesel engine as seen on the Innova, albeit with an additional torque of 60Nm over the Crysta in the MT and 90Nm in the AT version. Both cars are also available with a 2.7-litre petrol engine. The Innova Crysta doesn’t have a real competitor and is the best-seller in its class. On the other hand, the Fortuner has stiff competition from the Ford Endeavour and Mahindra Alturas G4, but manages to be the best in class as far as sales are concerned.