Car cos put on a brave face

The motor show is now open for general public till February 12. 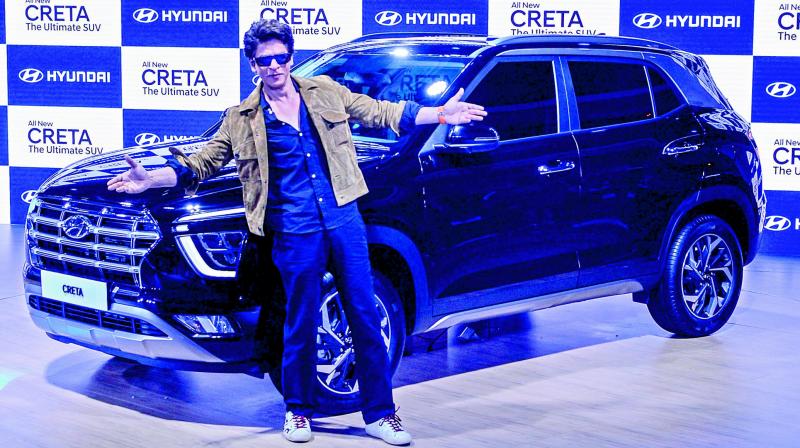 PUNE: The second day of the 15th edition of the Auto Expo, India’s biggest motor show at Greater Noida, continued with its somber mood with plummeting sales in a slowing economy hitting the industry hard even as automakers tried to put up a brave face with launches and unveils of cars and two-wheelers to drum up excitement and buzz in the market.

Market leader Maruti Suzuki, which will not introduce its electric car in the near future, on Thursday unveiled the all new powerful and stylish Vitara Brezza BS6 Petrol compact SUV. The latest version offers an enhanced sportiness, bolder looks, stronger stance, and premium interiors and comfort.

Launched in 2016, the Vitara Brezza became an instant hit as it took the market by storm, emerging as the most awarded compact SUV.  Its dominance over the segment is evident from the fact that in less than four years of its launch the Vitara Brezza has sold over five lakh units.

The car is powered by the 1.5-litre petrol engine, which replaced the 1.3-litre diesel as part of Maruti’s larger plan to withdraw diesels from its line-up by April 1, 2020.

The carmaker will launch and announce prices for the refreshed Vitara Brezza in a couple of weeks. Variants with the 5-speed manual are rated at 17 kmpl while the automatic, with the mild-hybrid tech, has an ARAI rated 18.76 kmpl.

Mercedes-Benz, India’s biggest luxury car maker, launched its V-Class Marco Polo, the latest luxury MPV range. The Marco Polo has been priced at `1.38 crore at pan-India showroom, which means it sits at the top of the V-Class range, even above the V-Class Elite variant priced at `1.10 crore.

The two variants of the V-Class Marco Polo are the Marco Polo Horizon and the Marco Polo, priced at `1.38 crore and `1.46 crore respectively. “The V-Class and V-Class Elite pioneered the luxury MPV segment in India and has witnessed much success ever since their launch,” Martin Schwenk, MD and CEO at Mercedes-Benz India, said.

Mercedes-Benz also unveiled the future of mobility the unique Volocopter, which aims to offer affordable on-demand air taxi services and save people time by flying them safely to their destination.

At present, the company is striving for commercial certification through the European Aviation Safety Authority and expects to open the first commercial routes within two to four years.

Korean brand Hyundai, India’s second biggest car maker, took off the covers of the India-specific, second-generation Creta SUV on Thursday. Revealed as the new-generation ix25 in China last year, the new Creta not only comes with revamped exterior and interiors but will also come with a new BS6-compliant engine line-up.

Hyundai will reveal the Creta’s interior and more details closer to its launch in mid-March 2020. It is likely to be priced in the `10-16 lakh range.

The original Creta not only defined what a midsize SUV ought to be but also dominated the segment for much of its life. This all-new Creta will take the legacy of Hyundai brand forward.

Volkswagen is in the midst of a massive transition towards electrification globally. At the Auto Expo 2020, the German brand gave a glimpse of what is to come with the I.D. Crozz electric SUV concept, the production version of which Volkswagen intends to launch in India by 2021.

First shown at the 2017 Shanghai motor show, the I.D. Crozz concept has evolved and the final product due for reveal in April 2020 could see more changes. The concept’s coupé-like roofline will likely make way for a traditional roof, while the rear sliding doors will be replaced by a conventional hinged arrangement.

Volkswagen said the I.D. Crozz combines the design of a sportscar with the off-road capability of an SUV.

China’s Great Wall Motor, which debuted at Auto Expo 2020 has made quite a statement with a slew of Haval SUVs at its stand. But it is not just the SUVs that are attracting attention but also the interesting the ORA R1 EV. The Chinese carmaker has also made an investment of $1 billion or about `7,123 crore in its India project.

Internationally, the R1 is sold as part of Great Wall’s ‘ORA’ EV sub-brand (which stands for Open, Reliable and Alternative). The R1 electric car is based on the company’s ME pure-electric platform. What will be a major draw for the R1 is its affordability. In China, prices for the R1 start as low as CNY 59,800 or `6.15 lakh. It remains to be seen how Great Wall Motor proposes to make the R1 as affordable in the Indian market, though the Chinese carmaker has already announced it will take over General Motors' plant in Talegaon for its India operations.

Great Wall Motor has confirmed that it will launch the Haval brand in our market in 2021, followed by their sub-brand for electric cars – GWM EV.

The motor show would be throw open for public tomorrow for the next six days till Feb. 12.