Battle of the big boys

As the seltos becomes the market leader in the utility vehicle segment, we glance at how the category is shaping up in india. 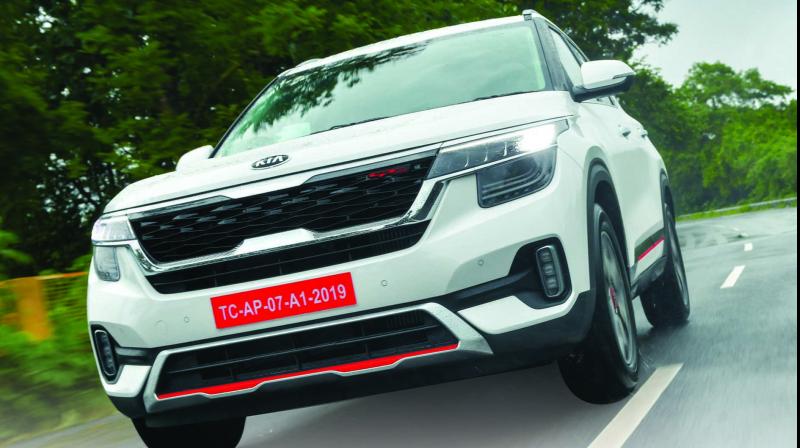 The market witnessed a growing consumer shift from diesel to petrol.

Within three months of its launch in Asia’s third biggest car market, Kia Motor’s Seltos, a compact SUV, has emerged the market leader, beating the Maruti Vitara Brezza. With sales of 12,786 units in October 2019, the former has breezed ahead of the latter by a good 2,559 units.

In fact, the Seltos has been a runaway success from day one. Its sales jumped month-on-month right from 6,236 units in August to 7,554 units in September. October, as mentioned above, saw a jump of over 5,000 vehicles.

Manohar Bhat, Head, Marketing and Sales at Kia Motors India, said that over 70,000 bookings for the SUV had been received till now and to ensure timely deliveries, the company has started a second shift to ramp up production..

With robust sales, the Korean brand has achieved a 4.85 per cent in the utility vehicle market share in India. What has helped the Seltos cut through this market is Kia’s ability to match production with demand and a sound marketing strategy of offering multiple engines, multiple gearboxes and multiple variants across multiple price points.

Also, the company has an installed capacity to produce 3 lakh cars at its factory annually and, thus, would not halt bookings of the Seltos like what happened with the rival MG Hector SUV before its bookings were restarted during the festival season.

Auto analysts believe that its aggressive pricing is helping the BS6-ready Seltos make headway in the competitive Indian SUV market. Its pricing strategy across 18 variants covers virtually every price point and starts from `9,69,000 for the entry-level petrol G 1.5 HTE model and goes up to `16.99 lakh for the diesel 1.5 CRDi GTX + (6AT) and G 1.4 Turbo GDI GTX+ (7DCT) top-end variants. With this, it takes on rivals like the Hyundai Creta, MG Hector, Nissan Kicks, Mahindra XUV500 and the Renault Captur in India.

In this battle for utility vehicle supremacy, the Brezza had wrested the crown back from the Hyundai Venue in September but lost it to the Seltos within 30 days, in October.

With sales of 10,227 units, the compact SUV recorded its third-best monthly sales in the April-October period, following the 11,785 units in April and 10,362 units in September. The Brezza’s cumulative sales in April-October 2019 are 62,437 units, down 34 per cent year-on-year.

The Brezza is very vital for Maruti since it accounted for a whopping 45 per cent of the company’s 1,37,318 units of utility vehicle sales in April-October 2019.

Interestingly, the market witnessed a growing consumer shift from diesel to petrol that somewhat impacted the Vitara Brezza over the past year since it did not have a petrol version. But newer rivals like the Hyundai Venue and Mahindra XUV300 are available with petrol engines.

However, Maruti Suzuki India has begun road tests of the refreshed Vitara Brezza, which is likely to debut around Auto Expo 2020 in February in New Delhi. The company had announced earlier this year that it will stop selling diesel cars from April 1, 2020, due to the upcoming BS6 emission norms. So the upcoming petrol-powered variant will replace the current diesel-powered model.

With sales of 8,576 units, the Hyundai Venue has been pushed to third place in the top four utility vehicles chart. The Venue was launched on May 21 and till October end, this compact SUV has sold a total of 51,257 units comprising 21,531 diesel and 29,726 petrol units, which makes for a 42:58 ratio, indicative of the consumer preference for petrol power in the domestic market.

The Venue has been a success story for Hyundai. Of Hyundai’s 1,06,366 utility vehicles sold in April-October 2019, it has accounted for 48 per cent.

According to Hyundai officials, there are around 75,000 bookings for the Venue, which shows its growing popularity in the market.

With Kia Seltos and its sibling, the Hyundai Venue, selling like hot cakes, the once-popular Hyundai Creta is down to the fourth position. Once a long-standing number two in the market, just below the Brezza, the 7,269 unit sales in October relegated the Creta at fourth place. The Creta’s October performance is better than the 6,641 units in September as well as August’s 6,001 units, but it is a tad below July’s 6,585 units.