The wholesale auto figures which are first to be announced every month give an indication about the pulse of the economy. 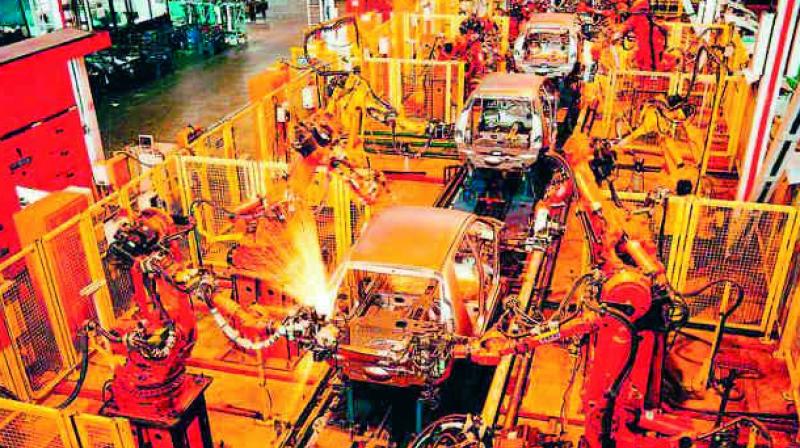 Money Issue was the main reason listed by respondents for softer growth in input buying.

New Delhi: The manufacturing growth slowed sharply in November after demonetisation but stills remains in the positive territory, according to a monthly survey.

Meanwhile, Maruti Suzuki India, Volkswagen, Toyota and Renault posted double digit sales growth in November despite fears that demonetisation will hit consumer sentiments. The wholesale auto figures which are first to be announced every month give an indication about the pulse of the economy.

Some analysts said that a part of the reason for double digit growth in auto sales may also be due to past waiting period of some popular car models and one will have to wait for one more month to see if the growth slows down.  Mahindra, Ford and Honda saw sales drop in November.

The Nikkei Markit India Manufacturing Purchasing Managers’ Index (PMI) — a gauge of manufacturing performance — fell to 52.3, down from a 22-month high of 54.4 in October.

Any figure above 50 indicates expansion, while a score below this level means contraction in factory output. “PMI data for November showed that the sudden withdrawal of high-value banknotes in India caused problems for manufacturers, as cash shortages hampered growth of new work, buying activity and production,” said Pollyanna De Lima, economist at IHS Markit and author of the report.

“Whereas some may have anticipated an outright downturn, the sector held its ground and remained in expansion mode,” Lima said. While many companies, surveyed for the monthly PMI scorecard, commented that further disruption is expected in the near-term, the demonetisation of the rupee is anticipated to ignite growth in the long-run as unregulated companies will leave the market, Ms Lima added.

Softer expansion in new business inflows affected the manufacturing sector growth during November as order books rose at a moderate pace which was the slowest since July.

The surveyed companies reported higher demand from domestic as well as external clients, but indicated that growth was hampered by the money crisis, the survey said.