The launch model had a starting price of Rs 5.87 lakh for petrol and Rs 6.87 lakh for the diesel variant. 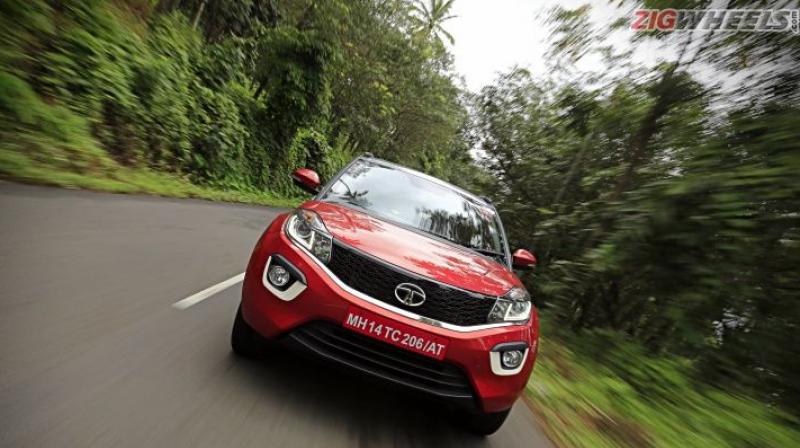 Tata Motors, whose passenger vehicle business is on a strong comeback, on Wednesday launched an automatic version of its compact SUV Nexon.

Mumbai: Tata Motors, whose passenger vehicle business is on a strong comeback, on Wednesday launched an automatic version of its compact SUV Nexon that has helped it treble the volume in the UV/SUV segment since roll-out early last year.

Since the launch in February 2017, this is the first sub-4 metre sports utility vehicle from Tata and is pitched against Maruti's Vitara Brezza and Ford's EcoSport, selling over than 30,000 units. The new variant is priced at Rs 9.41 lakh (1.2-litre petrol variant) and at Rs 10.3 lakh for a 1.5 litre diesel engine, the company said.

The launch model had a starting price of Rs 5.87 lakh for petrol and Rs 6.87 lakh for the diesel variant. "We have sold more than 30,000 Nexons since its launch in February 2017. This strong demand for the Nexon has led to a three times growth for our UV segment," the company said.

Tata Motors has branded all its two pedal transmission cars as 'HyprDrive' while all the AMT variants from the company will be now be termed as self-shift gears (S-SG).

Launching the AMT version, Mayank Pareek, president for passenger vehicles business unit said, "Our focus is to introduce products and services that not only enhance the brand, but simultaneously align well with the rising consumer aspirations."

"With the introduction of the a Hyprdrive S-SG variant of the Nexon, we aim to tap a larger market and increase our market share in not only the compact SUV segment but also the AMT segment," he added.