It is same-same but different for the new Toyota Glanza, which looks almost identical to the Maruti Baleno, but packs quite a punch of its own. 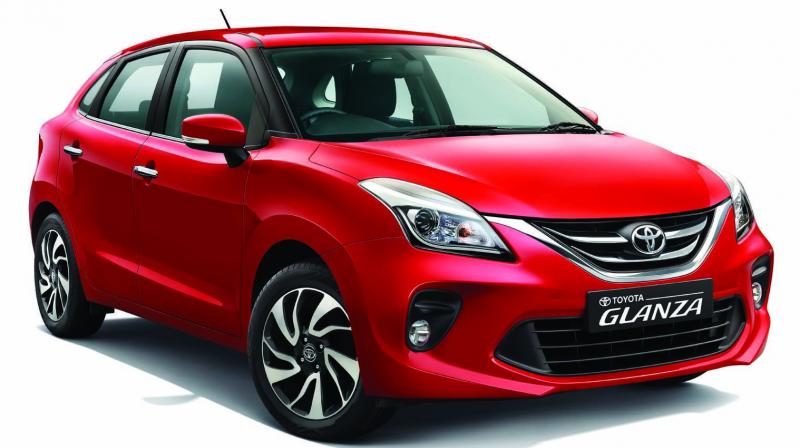 Japanese car giants Suzuki and Toyota announced their alliance sometime back, and the first product to come out of this joint venture is the Toyota Glanza which is nothing but a rebadged Maruti Baleno.

In fact, it is so similar to the Baleno facelift that there are hardly any changes apart from the badging. However, a lot of people keep asking which one to buy, the Glanza or the Baleno. So, We took the Toyota Glanza for a long drive to find out what it promises.

Undoubtedly, the Glanza is very similar to the Baleno in terms of exterior and interior design that you really cannot distinguish the two if you delete the badges. The LEDs, headlamps, alloy wheels for example are the same. In fact, the two cars are even manufactured on the same assembly line. Only the grille at the front is different.

The Glanza also shares its powertrain with its Maruti sibling. However, you can only have the Glanza with a petrol engine — either the standard 83HP, 1.2-litre K12M engine or Maruti's new 90HP, 1.2-litre K12N Dualjet motor that also gets a bit of an e-boost from a mild-hybrid system.

The Exteriors
The Glanza is based on the facelifted version of the Baleno. There are no changes at all and the colour options, alloy wheel design, lights, etc, are all the same.

The grille on the Glanza is a tad different and you get Toyota badging all around. Interestingly, both the Baleno and Glanza are manufactured on the same assembly line in the Maruti factory. The Glanza does look good and has the right proportions to slot it perfectly in the premium hatchback segment.

The Interiors
Just like the exterior, even the interior of the Glanza is identical to the Baleno. There is the Toyota badge on the steering wheel and that is where the change ends.

The dashboard layout is exactly the same and there is hardly any difference even in the equipment list. There exist the same features, more or less, like projector headlamps, auto climate control, keyless go with push-button start, electrically adjustable and folding ORVMs, auto-dimming IRVM, etc. The SmartPlay Studio infotainment system is now called Smart Playcast but the UI and connectivity options remain the same, with a glaring omission of navigation.

The Toyota Glanza offers generous space inside the cabin. The seats are comfortable and the space at the rear is also quite good with more than adequate knee room and headspace. Cargo capacity is just about decent.

The Drive Experience
Glanza is powered by Maruti's K12B and K12C petrol engines available on the Baleno. The K12B produces 82 HP and 113 Nm and the K12C DualJet churns out 89 HP while the torque output remains similar. The K12C mill comes with SHVS that includes features like torque assist, regenerative braking and idle start-stop system. We drove the CVT variant which comes with the non-SHVS version. The K12B is indeed a very peppy engine, more so the manual variant. It has a good low-end while the mid-range also has a fair amount of punch.

Initial responses on the throttle are good and when that little bit of e-boost comes in via the mild hybrid system, somewhere between 1,200 and 1,600rpm depending on the load, responses get marginally better. Interestingly, the info screen in the instrument panel tells you when the battery is charging or discharging.

Driving the city roads and on the highways, we found that for the most part, power, performance and refinement are more than adequate. The steering is also smooth and easy and the car takes in bumpy absorptions quite well. The brakes also do their job well. Toyota Glanza feels more refined and the ride quality is great.

Should I buy it?
The real question is which one should you buy: the the Glanza or the Baleno. Both variants of the Glanza, G and V trims, priced between Rs 7.22 lakh and Rs 8.90 lakh are based on the Baleno's Zeta and Alpha trims which are tagged between `7.86 lakh and Rs 8.90 lakh. But the Glanza G Hybrid variant is priced Rs 65,000 lesser than the Baleno's hybrid variant. Another big advantage is that Toyota's warranty of 3 years/1,00,000km is significantly better than Maruti's at 2 years/40,000km. So the buyer is betting on Glanza at present.