During her visit to Banaras, Yamuna manages to sneak some family letters from her grandfather’s files 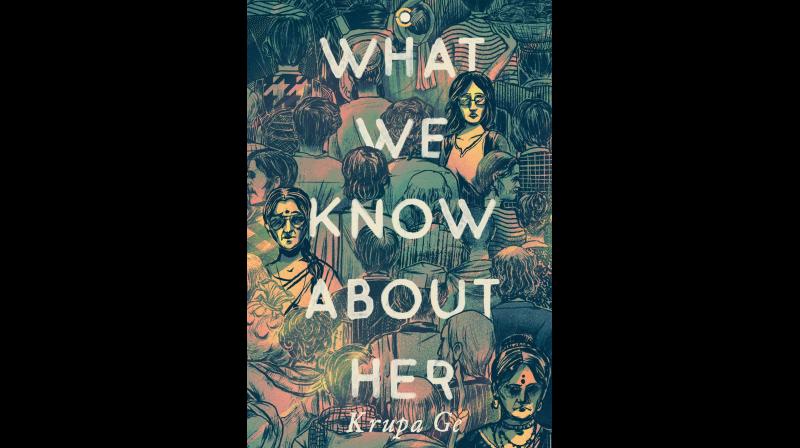 The story starts with the main character Yamuna heading for Banaras, in a train, to visit her maternal grandfather (thaatha). (Image: Amazon)

The title and the cover of What We Know About Her, by Krupa Ge, both have a high intrigue factor, as though they are portals to a thriller. Needless to say, I was excited to plunge into the world of suspense novels, as I felt a good thriller would be a welcome diversion from all the pandemic related news coming my way. Though the book didn’t satisfy my thriller cravings (more my fault because of my expectations) it made up for it by being unputdownable. I finished the book so fast, like I was devouring a tasty burger, one big bite after another.

The story starts with the main character Yamuna heading for Banaras, in a train, to visit her maternal grandfather (thaatha). The train standing between stations could be a metaphor for Yamuna’s life. Let me tell you a little more about Yamuna. She lives in her ancestral house in Chingleput. Currently Yamuna’s life is adrift in many ways. She has broken her long-term relationship, her thesis has reached a stalemate, she is constantly locking horns with her mother, regarding her ancestral house, which she feels is her rightful inheritance and is squatting there much to her mother’s dismay. This has affected the mother-daughter relationship.

Alongside pursuing a PhD on early twentieth century music in Tamil Nadu, Yamuna is also teaching in college. Her research fuels her fascination of her grand-aunt Lalitha, a Carnatic musician, a superstar of her times. Yamuna accidentally comes across a letter written by her grandmother to her grandfather mentioning Lalitha. Yamuna’s curiosity is piqued. Her questions regarding Lalitha’s life don’t elicit much response from her family.

It’s now up to Yamuna to piece together Lalitha’s life and death through letters, subtle questions directed at assorted family members and musicians. During her visit to Banaras, Yamuna manages to sneak some family letters from her grandfather’s files. With the help of these letters, she gets a better picture of her grand aunt’s life.

After she returns to Chingleput, her grandfather flies down from Banaras, as he has realised that she had taken his letters. He wants his letters back. While staying with Yamuna, a teasing banter between him and Yamuna, leads him to play cupid, with Karthik his friend Govindan’s grandnephew whom he invites for lunch. Karthik, an author of historical crime fiction, is initially reluctant to stay, but ends up staying for lunch.

With thaatha’s reminisces filling in a few gaps to piece the story of Lalitha’s life, some gaps are filled by Saveri aunty (Lalitha’s adopted daughter), Yamuna gets a better picture of her grand-aunt. Alongside Yamuna and Karthik’s friendship has now blossomed into a courtship.

The book oscillates between Banaras and Chingleput (Madras). The house in Chingleput becomes a minor character, albeit a silent one. The Banaras ghats, the gentle pace of life in Banaras, the Ganga arati, the time where child brides were the norm and marriage held prominence, all come to life under Ge’s pen, as does the extended Tamil family, the cursing widows frustrated with their fate, the commenting assorted relatives, will remind people of their extended family, especially their nosy uncles and aunts.

Yamuna’s thaatha is one adorable character who cornered a space in my heart immediately. Yamuna, for all her faults, too, has the readers rooting for her. Kudos to Ge for creating a bunch of likeable characters. The story moves like a gently flowing river, aided by the cool breeze of Ge’s writing. While discovering the secrets of her grand-aunt, will Yamuna end up untangling the knots in her own life? From being adrift, can Yamuna find her anchor and moorings? Read the story to get to know Yamuna and divert your mind from all the morbid news coming towards us from all directions.

Tags: book review, what we know about her, krupa ge