Geet Chaturvedi already enjoys a wide reputation as being one of the foremost contemporary Hindi poets. 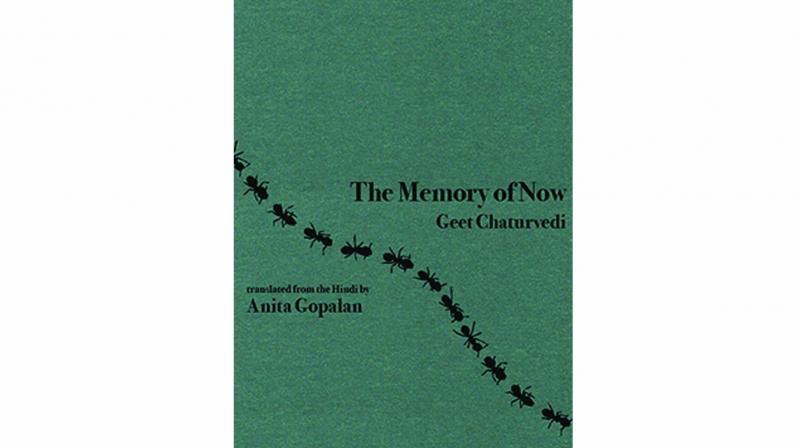 Translation does not happen in a vacuum, but in a continuum"

Translation does not happen in a vacuum, but in a continuum; it is not an isolated act, it is part of an ongoing process of intercultural transfer," argue Susan Bassnett and Harish Trivedi in Post-Colonial Translation: Theory and Practice. It goes without saying that translations are crucial to reach a wider reading public. The translated text lives in the new language addressing a whole new audience that opens up in the target language. Let us face it; most of what we read from foreign literature and the other Indian languages (apart from our mother tongues), we do in translation. These last few months I have had occasion to immerse myself in a wide range of translated books — here are some of them.

Geet Chaturvedi already enjoys a wide reputation as being one of the foremost contemporary Hindi poets. But with the publication of The Memory of Now (Anomalous Press) in the United States, his poetry will reach a much wider audience, as it deserves to. The translations from Hindi into English by Anita Gopalan are of a high calibre. In fact, had one not known that he originally wrote in Hindi, one would think that he is a fine English language poet. Chaturvedi has a sharp cinematic eye that is at the same time extrovertedly public and subtly private. The 26 poems that are present in this volume display a wide variety of styles ranging from long-lined free verse to prose poems. They are also wise, full of literary and historical references. Take for example the opening of the poem, ‘Style’: “Heart has a history of its own / It has its own civilisation // In the lines above. Rilke had / Written hands in place of heart // These hands would someday remember / They at one time were wings.” The five-part poem, ‘The
Little God’ is a personal homage to Nietzsche. He writes this sequence as a “respect” for him, and his “respect is boundless. … endless”. The poem opens in a dramatic manner: “Such is the tragedy of all fish / Deep they swim, yet cannot fathom the unfathomable // An unseen wind can sway the tree / These two hands cannot // In the unfathomable and the unseen is a plenteous supply of sorrow.” Among my many favourites in this book are the series of five poems that conclude the volume, which are on the films of Tran Anh Hung, Wong Kar-wai, Nuri Bilge Ceylan, Yasujiro Ozu and Francois Truffaut. Chaturvedi is an outstanding poet, and Gopalan as the translator does an equally outstanding job in English.

Most of us are aware of Vishal Bhardwaj “as a filmmaker whose films have consistently pushed the envelope and as a composer who has churned out some of the biggest chart-toppers in the recent years”, but not too many know of him as a poet. Nude (HarperCollins) by Vishal Bhardwaj — translated wonderfully into English by the poet and academic Sukrita Paul Kumar - contains 25 ghazals (poem-songs) and 25 nazms (poems). They are at the same time contemporary in tone yet carry the old world charm of Urdu and Hindustani traditions. Here is a quatrain, ‘Achanak | Suddenly’: “Wrapped in a soft light-green shawl / As she moved towards me / Eyes lit up with glow of the ties / We had buried in the snow together.” The present and past play out beautifully here, their interrelationship mirroring the narrative of the protagonist in a subtle yet haunting way. ‘Bhai’ is an affectionate and gentle ode to the poet and lyricist Gulzar: “Careful, lest you shatter his solitude // He is like a cloud of light velvety wool / Swallowing the harsh sun to provide shade to the others…” In his poetry, the “Internet and Mirza Ghalib on the roads of Mumbai happily coexist, offering an insight into how contradictions can be reconciled simple and ingeniously”. Nude provides a parallel window to Vishal Bhardwaj’s prodigiously wide-ranging creative talents.

Anisur Rahman's Hazaaron Khwahishein Aisi (HarperCollins) opens a double-door to “the wonderful world of Urdu ghazals”. It is a skillful and passionate paean to the whole micro and macrocosm of the nuances of the ghazal form in Urdu. The title of the book comes from Ghalib: “Hazaaron khwahishein aisi ke har khwahish pe dam nikle / Bahut nikle mere armaan lekin phir bhi kam nikle.” Rahman beautifully and lyrically translates this as: “Desires in thousands I had, for each I would die / With many I had luck, for many I would sigh.” The book contains an exhaustive array of 65 poets from the historical “metaphysical beginnings” “towards enlightenment” through “romance of realism”, “modernism”, “progressive poetics” and “beyond new poetics”. From the 16th century to the present times, the book provides an exhaustive panorama of Urdu poetry, made even richer for contemporary readers by the act of juxtaposing Roman transliteration alongside the English translations. As the translator, Rahman does a consistently fine job through the entire length of the 450-odd page book — this is an outstanding volume.

Saif Mahmood’s excellent book, Beloved Delhi: A Mughal City and Her Greatest Poets (Speaking Tiger), is a passionately written and articulated, as well as meticulously researched, book. It documents eight of the most important poets: Sauda (The Great Satirist 1713-1781), Dard (Urdu's Dancing Dervish 1721-1785), Mir (The Incurable Romancer of Delhi 1722-1810), Ghalib (The Master of Masters 1797-1869), Momin (The Debonair Hakim of Delhi 1800-1851), Zafar (An Emperor's Affair with Urdu 1775-1862), Zauq (The Poet Laureate 1788-1854), and Dehlvi (The Last Casanova of Delhi 1831-1905). Mahmood writes, “Politics and poetry are said to be interwoven, even if they aren’t equivalent. In the Delhi of the 19th century, everybody — from the king down to the impoverished vagrant singing in the koocha and bazaar — was smitten with poetry.” Apart from the translations of many of the best-known poems in this period, the book’s narrative reads like a warmly recited story told over many nights with conviction and care. Mahmood’s book, which serves as a wonderful introduction to a lay reader, is a must read for everyone!

The poems in The Last Weave (Vani) by Yatindra Mishra — well translated by Nirupama Dutt — are an open plea to “understand anew” the verses of the mystic poet Kabir. In the title poem itself, the poet says that “One is curious to know / for whom did Kabir / weave the last shawl? // There is wonderment / where did the feet rest for the last time / in the journey of this Yogi?” The book is the poet’s personal quest — as Gulzar puts it, “Yatindra has gathered the scattered keepsakes of Kabir.”

Volga's novel Yasodhara (HarperPerennial) translated very ably from the Telugu by P.S.V. Prasad is the story of Yasodhara, the young wife of the prince Siddhartha —Gautama Buddha. By highlighting her story, “the gaps of history are imagined with fullness and fierceness” bringing out the author's feminist leanings with wit and compassion.

Bijon Bhattacharya's Nabanna: Of Famine and Resilience (Rupa), translated with care by Arjun Ghosh, is a play that is considered a classic in Bengali literature. Set in the village of Aminpur, this is “a hard-hitting play about social stratification centred around the hardships faced by the rural poor in the wake of the historic Bengal famine.” A wonderfully valuable addition to the book is the extensive postscript that contains production notes, memories by some of the original actors, an interview with the director, cast list and bibliography. It is very rare to see a playscript published in this day and age, and for that the publisher ought to be congratulated for taking up this important text and presenting it in an elegant, understated manner.

It is fitting to end my column with the words of the Nobel laureate, Octavio Paz, who wrote in ‘Translation of Literature and Letters’: “Each text is unique, yet at the same time it is a translation of another text. No text can be completely original because language itself, in its very essence, is already a translation.”