Books   31 Mar 2019  Otherness and unbelonging in the Northeast
Books

Otherness and unbelonging in the Northeast

The focus of the Partition of India has for too long been on the line drawn on India’s western border, through Punjab. 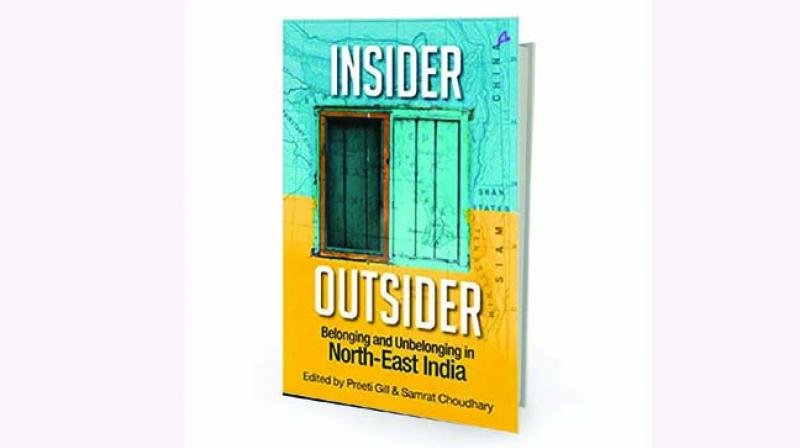 As you read through this book, you realise just how overdue it is. We talk a lot in India, and about several uncomfortable issues these days, not just cricket and Bollywood any more. But the Northeast remains largely unknown terrain for most of the country which has never been there nor encountered anyone from there. Although increasingly, this self-inflicted isolation or exclusion is thankfully getting more and more difficult.

What editors Preeti Gill and Samrat Choudhary have done is introduce us to a spectrum of voices from Northeast India. Almost all of them have multiple identities — as do most of us — and almost all yearn to be accepted, to not be “othered”, to belong where they want to belong. Some are stoic in recounting their “otherness”, some are angry, some share poignant, poetic memories. The strain heard again and again is: “I am here, I am part of you, why do you see me as the enemy?”

It is tempting to say that this collection of voices is vital to our times. But that would be unfair, because these stories are vital to all times. Through our history, migration and origin have plagued the human race. All frameworks of loyalty, nationalism, club memberships are based on the “other”, to hide from, to exclude, to fight.

The Northeast of India is also forgotten for other reasons. The focus of the Partition of India has for too long been on the line drawn on India’s western border, through Punjab. Even there, the loss of Sindh gets very little space. The Partition in the East, of Bengal, has re-entered national discussion only recently and is still unfamiliar to many. But the effect of Partition on the Northeast is completely ignored.

As Binayak Dutta writes about Shillong, (Collapse of a Colonial Cosmopolity), “Partition of the country and the Constitutions coming into force unconsciously perhaps introduced a new dimension to inter-community conflicts. It contributed to the new classification of a rival community of ‘foreigners’ who were perceived as impediments in the Khasi quest for self-rule.”

Anjum Hasan’s Growing up with Mrs P is a beautiful story about being welcomed and nurtured by the Other, in spite of being the Other. It is of the humans we all are, after you strip away labels of birth and history. But it is also of the pain of living in Shillong and leaving Shillong. Indeed, this city, once a British colonial headquarter, the capital of Assam, now capital of Meghalaya, is the most common recurring theme. How does one become an outsider in Shillong? You can be one for being Assamese, like Ankush Saikia is, or for being Bengali and Muslim as Shalim M Hussain shares, or a Punjabi married to a Khasi as Paramjit Bakshi writes.

These pointed statements by editor Samrat remind us once again of how wilfully ignorant India has chosen to be about the upheavals and unpleasantness of being the Other in the Northeast. Indeed, until the National Citizenship Bill was used politically by the BJP, these subjects remained unspoken.

Most of the pieces in Insider Outsider are personal recollections and ruminations. What about the insider insiders? There are two pieces in this collection marked by their anger. Thounoujam Brinda’s Phenomenon of Impunity records the atrocities and injustices wrought on the people of the Northeast by Indian Independence and the Indian state. The “others” are official institutions rather than human. Suhas Chakma’s Outsiders in Their Own Lands contains the rage and injustice of the settled who have been pushed around by history and political lines drawn without their consent.

Sanjoy Hazarika’s Insiders, Outsiders and Those in Between and Anindita Dasgupta and Neeta Singh’s In Search of Lost Time both provide a more scholarly and reasoned look at the conflicts within and without the Northeast. The horrors inflicted because of the Armed Forces Special Protection Act (AFSPA) are recounted in the more political pieces.

If there is any criticism, it is that the focus on Shillong appears to be overdone, even if Shillong appears as much a metaphor as a place (reading this book, I remembered that I had two great-grandfathers who had homes in Shillong in the beginning of the last century, perhaps I need to visit and discover this past). But, perhaps, here is scope for the editors to do their next collection, which will be much awaited.

The saddest takeaway from this very readable collection of essays, poems, stories and analyses is the familiarity of the writers with the word for “outsider” in a variety of languages. I find myself repeating the pain of Bakshi’s title, I, Dkhar, over and over again, because are we not all outsiders somewhere at some time?