At a certain point, you were back to your young adult self, hair all black, clothes all black — you suddenly seemed much taller. 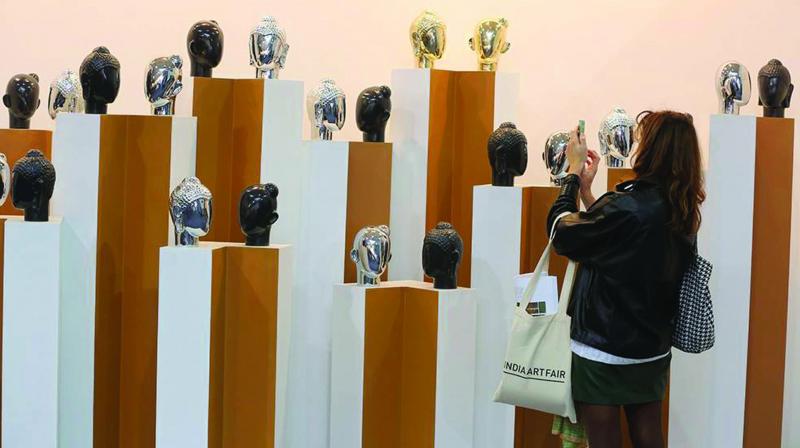 Each silkworm glowed — electricity on tenuous gossamer strings, sparking and flickering every now and then.

At the India Art Fair in New Delhi — amid a swirl of colour, canvas, installation, projection, paper, text — weaving through its intricate poetry — I felt I was in a museum, a tented temporary museum — wrapped in a beautiful tussar sari given to me by a student — looking at two pieces of Indian art. They were in glass cases, back-to-back. The architecture and proportions of the pieces, pitch-perfect.

I swivelled around — you had just arrived. You were much older and your hair was all white and you were dressed in lighter colours. As we looked at the artwork, I turned to talk to you — and you kept getting younger.

At a certain point, you were back to your young adult self, hair all black, clothes all black — you suddenly seemed much taller. I looked at your feet to see if you were standing on something — in fact you were on a threshold. I looked up again at your tall self — you were half leaning against a doorway.

The artwork we were looking at had two abstract designs — like the ones embroidered on my sari. They were sparse on a light background, and were made by points marked by beautiful gem stones in many colours — like a constellation or an outline of a body marked by points rather than lines, or pins marking spots on a map.

Each of the stones was from a different region in India. It was an exhibit after all, and I remember that there were small pieces of coloured paper at the bottom that would tell you where a particular gem was from. Each gem was a single stone, no two colours were the same, and the colours were all intense — I remember very vivid pinks, blues and greens.

And at the top of one of the designs there was a paisley shape in deep purple — round part on top, curling down and standing on its tip. That one had a beautiful dark pink stone at the very bottom, with other pinks, blues, turquoise, indigo, greens — and many many shades of lavender and purple.

Then you disappeared in the middle of the conversation. I kept on talking and realised only much later that you were not there — certainly not in the flesh. In spirit we continued our conversation. Then absence.

In our absence we kissed — a long kiss, becoming a series of kisses marking the exact difference in time zones that separated us. Each kiss much longer than the one before, each one balanced on the lips, held gently in our invisibleness.

The sari unravelled to become part of the exhibit in the museum, the artwork layered with narrative hidden in the silkworm’s weave. Each silkworm glowed — electricity on tenuous gossamer strings, sparking and flickering every now and then.

The sparks ignited a different colour in each gemstone — as if unearthing or sourcing a different ore, each with different frequencies of lightning.

My hair turned from all black to white, and then to salt-and-pepper. The purple glow was the beginning of yet another aleph, a start of a new script, a closure of the last one. Closure was just a continuum.

I was writing in air — dreaming on gossamer silk strings — ink rolling along the long stylized serif surfaces of our endless electric kisses.

My hands are still dripping — with paint, with swirling fumes and cry of acrylic, with colours emanating the smell of seductive chemical. It was the first time I had faced a real canvas mounted on its easel and been presented with an array of acrylics to choose from at will. And before I could come to grips with this medium — the physicality of brushes, sable hair, scalpel, palette, ceramic bowls, tubes of paint, a blank canvas — something induced me to jump headlong into the act, without practice, with my heart doing the talking; ... just like a child who stares wide-eyed and thrilled at opening a box of new toys; ... just like a blind person whose sight has been recently restored from the unfocussed monochromatic to a vision that is kaleidoscopic.

I had come here to explore a new medium in art as catharsis. I had chosen, in my mind, the colours I wanted to use — deep blue and white — before I had even arrived here. All I wanted was a stretch of virgin linen where I could layer my coded narratives; try, at the same time, to express and hide.

As I walked into my friend’s gleaming white apartment, I was warmed by the ambience that they had created — with the profusion of natural greens, ferns and leaves; . . . with the quietly kept pair of glass bowls — one containing molten shapes of coloured wax, and the other, an assembly of matchboxes from all over the world; ... with well-framed paintings hung judiciously on the walls; ... with books and cds that lay in perfect geometric arrangement on carpets and shelves — all suitably lit and positioned.

But by the time I left the studio, I had before me colours running riot on a grainy canvas space, texture and undulation creating relief against the frozen density of paint, narratives torn asunder from Bengali newsprint, red and white strings providing anchor and balance, an errant feather arrested in mid-flight, white tissues trying their best to absorb blood, and more — all these on a vertical piece of stretched linen, an untutored map, a previously uninhabited terrain.

Late that evening at the day’s end, as I sat sweating and exhausted in the frenzy of paint, pondering upon the canvas I had just created, staring at the shapes and stories it contained, I could hear, with gathering intensity, the prayer call outside — Allahu Akbar, Allahu Akbar.