Writer’s new book You Came Like Hope that talks about women victimising men, is also a story of hope and how love prevails in the end. 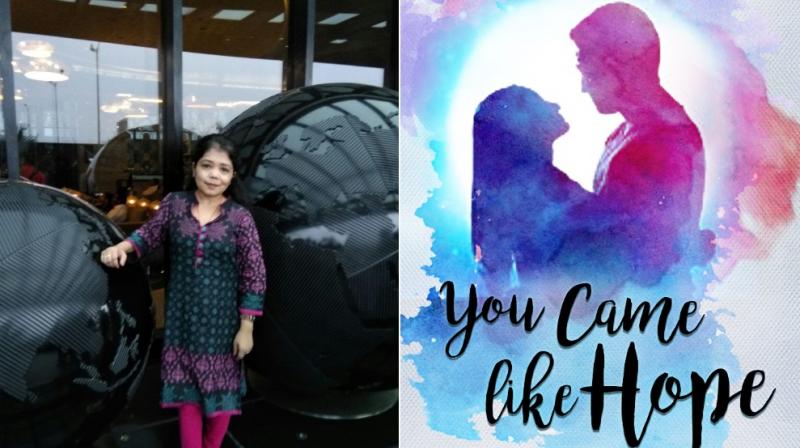 When Jyoti Arora had quit her school due to failing health, no one had any expectations from her. Arora, now has three novels to her name till date.

Following Jyoti Arora’s second book, the ‘quintessentially feminist’ Lemon Girl, which was on rape and victim-blaming, the author was floored with Twitter trolls who relentlessly sent her newspaper clippings of incidents where the opposite has been proven too.

This prompted Arora to feel the need to present the other side of the story to readers and with this thought in mind, she wrote You Came like Hope.

The author confesses that while it was easier to write this book, it was far harder for her to imagine.

Speaking about writing the book, Jyoti, a novelist and blogger from Ghaziabad confirms that the entire reason for writing the book was the many Twitter trolls she received.

She says, “One of my tweets about my second novel came under attack by some anti-feminist Twitter trolls. All day long, these trolls kept on tweeting to me news stories of cases where a woman had victimised and falsely accused a man. It was frustrating, but it showed me that there was an opposite side of the issue I had raised in Lemon Girl.”

Intrigued, she decided to write a novel about it too, and You Came Like Hope was born. The author says that both novels act as foil to one another, showing two sides of the same problem.

The author agrees that while crimes against women are on the rise, there is a separate side to the story as well.

“Women do file fake cases against men and their families, wrongly accusing them of rape, domestic violence, dowry etc. This problem is very real and even our Supreme Court has taken note of it,” she states, going on to add that according to a recent study by the UN, Indian wives rank third in the world for beating and abusing their husbands.

However, the author agrees that imagining the novel was far difficult than her first endeavour.

The author who says she did careful research to get minor details right also read through several news stories about fake cases filed by women and consulted legal web forums to do her research.

The basic premise of the book has a twisted plot that involves a pair of twins and how they manipulate things. Elaborating on the twin angle, Arora says that she wanted to show a feeling of competition and jealousy between two characters who are otherwise very close to each other.

“Peehu and Pakhi in You Came Like Hope are twins and share a very strong bond of love. Yet, Peehu is jealous of her own sister. It creates a very interesting conflict between her love for Pakhi and her jealousy,” she says.

While the book deals with a lot of complexities, a patient of Thalassemia Major, Arora never let her complex condition affect or stop her from achieving her dreams.

The author, who had to quit schooling after class 8 made a conscious decision to lead a normal life.

“I knew that if I gave up on studies, my lack of education would make me feel less than others,” she says, adding, “So, I continued my education on my own, through correspondence courses.”

Despite her continuing health problems, Arora has managed to acquire two Post Graduate degrees in English Literature and Applied Psychology.

It was while she was studying literature that she started aspiring to become a novelist.

While the author has gone on record saying that Lemon Girl was a feminist novel, one wonders what her take on her new book You Came Like Hope would be.

Arora says that her new novel too is ‘truly feministic’. She goes on to add that the novel protest against women abusing their rights and victimising men, but also showcases problems women face.

“Feminism means making efforts to ensure gender equality,” the author opines, adding, “It does not just mean empowering women. And it is not anti-men, as many would believe.”

She further adds that as the beauty of the book lies in the fact that as the plotline moves forward, readers can see perspectives of all characters shifting.

From blaming destiny to concentrating on hard work, or from hating and mistrusting women to love and trust, changing perspectives are what drives the novel forward feels Arora.

A novel based on the lives of four protagonists, namely Peehu, Pakhi, Uday and Adih, Arora says that the book mirrors the complexities of real life, but is not a complicated book in itself.

“It revolves around some very conflicted characters,” Arora says, adding that characters have their faults and everyone is hanging at the ends of their ropes.

“The novel is a story of love and hope. Destiny’s justice is as doubtful in my book as in real life. But in the end, love wins and we have a happy closure,” says Arora.

The young author who feels that it would make a good movie, and would like to see Deepika Padukone and Ranveer Singh in important roles adds that as the story unfolds in her new book, a very interesting parallel is developed between the positive and negative characters.

When Arora had quit her school due to failing health, no one had any expectations from her. Arora, who has authored three novels till date says that while her battles are not yet over, she is proud that she has managed to make something of herself.

As for what’s next, she concludes, “All my three novels have love stories based on serious social issues. For my next book, I think I’d like to try something lighter, a pure romance maybe.”