A touching story of love, longing and sacrifices in showbiz

The book falls short of a literary masterpiece and that is not because of its flawed heroine. 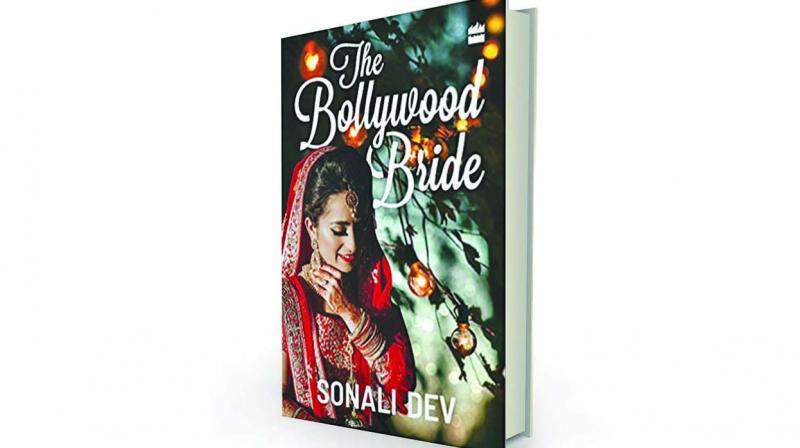 When I started reading The Bollywood Bride by Sonali Dev, initially I was a bit put off, because the story and the protagonist took its own sweet time to appeal to me. And once it started appealing to me I was determined to finish the book, even with all kinds of writing deadlines shooting daggers at me and my cough medicines making me sleepy. The Bollywood Bride is the story of Ria Parkar, a Bollywood actress, she is called the Ice-Princess: aloof, indifferent, maybe cold, but by no means calculating. This Bollywood actress has a squeaky clean image, devoid of scandals and rumours. Ria’s one impulsive act shoves her to the brink of scandal and close to exposing her destructive past, which she has kept safely hidden away from the media and the world for many years.

Twenty-eight-year-old Ria travels to Chicago from Mumbai, for her cousin Nikhil’s wedding to his girlfriend — Jen. Initially Ria is reluctant to attend the wedding, as fear of confronting her past, in the form of tall, handsome and talented Vikram Jathar, who has loved her from the time he was a kid.

Now let’s flash back a little to the past. One summer Ria came to spend her holidays with her aunt Uma Atya (her dad’s sister) and her husband Vijay kaka in Chicago. Here she met Vikram, her uncle’s sister’s son. Both Vikram and Ria spent their childhood holidays in their common aunt Uma’s house, amidst love, laughter and pampering.

The quiet eight-year-old Ria was slowly and patiently drawn out of her world of silence by the determined 11-year-old boy. He broke the hard shell of her silence and pulled her into his warm world of friendship. From close friends Vikram and Ria’s relationship blossomed into the intoxicating terrain of first love, with stolen kisses and surreptitious lovemaking.

At 18 Ria makes a shattering decision, choosing stardom over Vikram, choosing to sleep with the superstar Ved Kapoor, who regularly beds his heroines by promising them glitzy breaks in Bollywood. Ria tells a heartbroken Vikram to leave her alone. We come to know the reason for this much later. Ved Kapoor christens Ria Pendse — Ria Parkar — and therein starts her journey as a heroine.

When Ria lands in Chicago for the wedding, she faces Vikram’s ice-cold vibes and taunts for jilting him 10 years back. Vikram now has a girlfriend Mira who he snogs near Ria, perhaps to make her jealous or maybe to show her that he has moved on.

Initially Vikram and Ria avoid each other, but it’s not possible to do so in the Big Fat Indian Wedding in Chicago. Living in a wedding house, it’s next to impossible for the guests to keep a distance. Vikram and Ria are thrown together into the wedding preparations. Vikram who has always been protective of Ria from childhood, once again plays the chivalrous guy by saving her from an irritating fan while they are shopping for Nikhil’s sherwani, getting hurt in the process.

As the wedding approaches, Ria and Vikram, unable to control their feelings, succumb to temptation and find discrete places to make out among the wedding preparations and functions. While getting intimate with Vikram, Ria also tries to convince her agent DJ badgering her to sign for the lead in a parallel cinema and move away from her usual commercial cinema roles.

The Auntie Brigade — the ladies who are a part of Uma’s inner circle — were my favourite characters in the story. They were so lifelike that they nearly popped out of the pages right into my room. I liked reading that part of the book a lot. I also enjoyed reading the wedding preparations in a foreign land. Vikram was another interesting character who pepped up the story with his larger than life presence and his multi-talented personality, else Ria’s story leaned a bit towards the boring side, mainly due to Ria’s dull personality and quiet character. I looked forward to Ria’s interactions with other characters which enlivened the story.

At the wedding Ria meets Chitra, Vikram’s witchy mother who once again asks Ria to keep away from her son. While the wedding is underway, Vikram confesses his feelings to Ria, she again plays the runaway heroine, by jetting back to Mumbai two days ahead of her original schedule, once again ditching Vikram.

In Mumbai, Ria reluctantly signs the StarGangster movie. All hell breaks loose when Ria’s photographs where she is standing on the ledge trying to retrieve her mobile phone hit the newspaper. The journalist in the story accompanying the pictures insinuates that Ria is suicidal. The media goes berserk, labelling her as mentally unstable, dredging up her past, with tidbits of gossip from her old classmates. All the details of her sordid past come tumbling out of the closet. When Ria finally finds the courage to face her secrets, she once again meets Vikram as we all knew she will meet him.

At its core The Bollywood Bride is a touching story about love and longing, about sacrifice and difficult choices we make in life. The book falls short of a literary masterpiece and that is not because of its flawed heroine. Flawed characters have their own charm. If Ria’s character had been fleshed out more, if it had the gravitas a successful Bollywood heroine should have, the story would have been different. Wonder whether it was a deliberate decision by Dev to keep Ria’s character unassuming and the kind that blends into the background. Written in a wonderful style, the language makes one sigh, many of the passages are so beautiful that if the deadline to submit the review wasn’t looming before me, I would have definitely reread them. Read it for the sweet story and the brilliance of Dev’s prose which crackles with electricity, sparkling like a precious gem.

Rachna Chhabria is a Bengaluru-based children’s author and a freelance writer. Her soon to be published book Festival Stories Through The Year has made her fall in love with our festivals and rituals.