Book review: The curious case of a serial killer

The book would have made for a more satisfyingly meaty read if the readers got a brief idea of the criminal psychology of the serial killer. 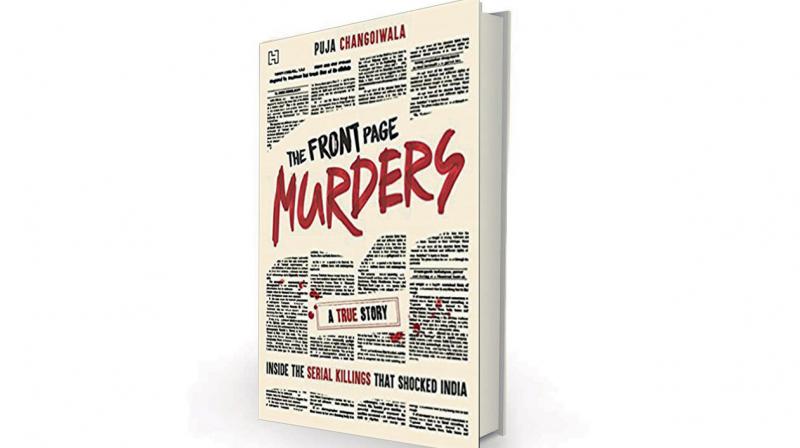 In the summer of 2012, a double murder case, which seemed to be straight out of a racy crime fiction book, shook the nation and made its way to TV/newspaper headlines as one of the most chilling murder mysteries in valuing a sophisticated serial killer in the recent times in India.

The gruesome murders of aspiring film producer Karankumar Kakkar and New Delhi-based businessman Arunkumar Tikku, planned by Vijay Palande alias Karan Sood, who was also a police informer, sent Mumbai police and the media into a tizzy for many weeks.

Senior journalist Puja Changoiwala, who during her stint in an English daily as a crime reporter, covered the incidents as they unfolded, in her book, The Front Page Murders, recounts the gripping behind-the-scenes details of the multiple murder case. In doing so, she also narrates the media frenzy for a juicy story (“In journalism, one man’s misery is another man’s job”), the unsatiable human appetite for horror in real life and the perils of being a journalist. (In the SWOT analysis chart of journalism, confrontations with gangsters fall under “opportunities”, “Journalists can be friends; it’s just that terms and conditions apply”).

The narrative, mostly written in engaging diary-like entries, also educates the reader about how police investigations are conducted and custodial torture carried out. It throws light on the police-informer relationship and profiles several Indian serial killers. The book also tries to take a peek into the mind of Palande, who is described as “a cold-blooded killer equipped with the sophistication of Charles Sobhraj, the manipulative genius of Ted Bundy and the cruelty of Jack the Ripper”. However, the psychology behind the criminal mind of Palande remains a mystery.

The book would have made for a more satisfyingly meaty read if the readers got a brief idea of the criminal psychology of the serial killer.

The book is well-written and the characters well-drawn. It has all the ingredients of a potboiler — love, lust, money, greed, cricket, Bollywood, glamour, sex and crime.

The novel can be a good reference book for aspiring media students who want to make it big in the field of crime reporting — a how-to guide about extracting information from sources, including police officials.

Peppered with some tongue-in-cheek one-liners, the book also gives an insight of the working of media professionals (“Journalists don’t mind insults.

It’s part of the job description”, “Journalists are accomplished trespassers, and even better stalkers”, “‘Waiting’ tops the duties and responsibilities section of a journalist’s job profile”), or the competition among peers for “breaking” stories (“If the grapes aren’t sour, the journalist is probably standing under the wrong tree”, “Journalists can accurately predict their daily horoscope based on the day’s headlines”) and the “cold war” between print and electronic journalists (“Journalists are dramatic. It’s a crucial part of their training”).

The writer is a noted crime journalist and television producer and director. He was the host of India’s first TV crime show “India’s Most Wanted”. He is also the founder and editor-in-chief of the news magazine, Bureaucracy Today.