Book review: Making fiction out of nothing at all

The author is a great writer, of non-fiction. Sadly, his hold over what makes for good fiction is lacking. 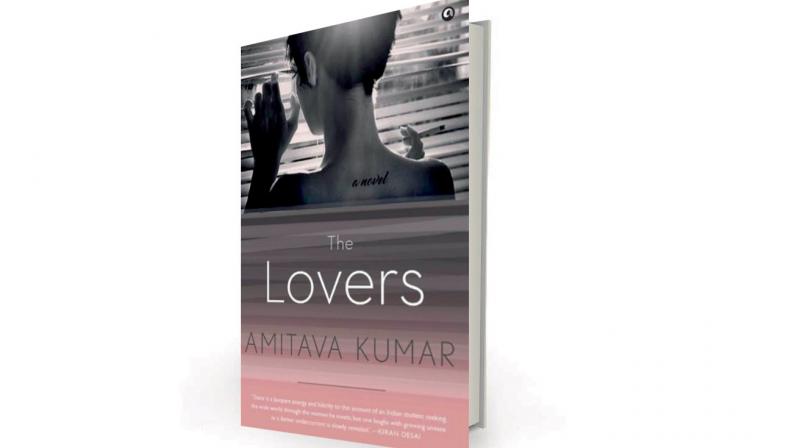 One would expect from a book thus titled, sensuality, a certain degree of candour, or — at the very least — a voracious appetite for love or sex or both. Instead, Amitava Kumar’s second novel, The Lovers, is about Kailash, a young boy from Patna, who moves to New York to study and lose his virginity. On reaching America, the protagonist takes on lovers and these lovers are broken into chapters: the older Jennifer who undergoes an abortion, classmate Nina who lies constantly, Cai Yan whom he initially f***s for fun. There are also mentions of Dr Watsa’s sexpert columns, Osho’s orgies, and Kailash living vicariously through the actualised sexual encounters of his experienced Sikh friend, Noni.

The blurb says that Kailash is in search of a love story, but while he takes on many lovers, Kailash confesses to never seeking love because he doesn’t “equate it as one of life’s goals”. In fact, so wavering is the protagonist, that he lingers on the edge of sex, like a stalker, but doesn’t dive into it the way one would expect from a sex-starved fledgling.

In a similar vein, Kailash’s wide-eyed experiences as a student in a foreign land are mentioned, but the wide-eyed voice, that sense of wonder, is missing. Perhaps the story has been written much later than it should’ve been. Perhaps we’ve already read too many stories about wide-eyed students in America.

When you place yourself between two countries whose dynamics have been recounted and preserved in the pages of many novels, short stories and academic journals, you have to either offer new information or a fresh perspective. The truth is that recent Indian-American tales are so thick with the shambling slovenliness of redundancy that one approaches these books with hesitancy. Can we really sit through another winding saga about mangoes, hot summer days on the terrace, the small-town scandal of a relative, the mother’s unending love, the animal or bird on the terrace, or America’s isolation that scalds with its slow embrace?

Similarly, can The Lovers claim to be another immigrant story? The book contains all the placid elements: water shortages, the family anecdotes, expensive long distant calls, the seduction of white people with third world rejoinders, the errors in English signboards like “Rajesh Wets Shalini” instead of “Rajesh Weds Shalini”, and quotes from Gandhi. Remember, the shambling slovenliness of redundancy? But this is the same old immigrant story that belies its own genre by not even being a story.

Why is that? The blurb describes the book as a “decidedly modern novel that blends story and reportage, anecdote and annotation, picture and text, fragment and essay”. These elements are present, distractedly so, with academic papers, handwritten notes, photographs of elephants, screenshots of films like Dr Kotnis, and Picasso’s drawings. But the thing about calling any book a work of fiction, however modern, however avant-garde, is that — hold your breath — it has to have a little thing called a “story”. If you can’t give us a story, give us memorable characters. If you can’t give us memorable characters, leave us with a feeling: some passion, a little imagination, a little thought, or at the very least, some entertainment. The author could be forgiven if he had sold his story as streams of consciousness, but it doesn’t even come to that. Nothing amounts to much at all.

Let’s take a quick look at the writing. The author is a great writer, of non-fiction. Sadly, his hold over what makes for good fiction is lacking. The first rule of writing is to show, not tell. Yet, everything about this book is told, not shown.

An example: Kailash is nicknamed AK-47. This fact is told to the reader, not shown. Characters arrive and leave, without the aftertaste of familiarity or, at the very least, comfort. They’re placeholders to the disjointed plot, and amount to little else.

Professor Ehsaan Ali, who finds himself cast as a recurring character, remains unsympathetic, woven into parts where the political becomes more than the personal. Another oft-mentioned character is Lotan Mamaji, who is later killed by his grandson. This is intended, I suppose, to shock the reader, but a reader can hardly be moved by the death of a character so distant from the plot, a character suffering from the similar fate of too much telling and no showing.

Another downfall: the book is academic in more parts than necessary for a book of fiction. The author dedicates a chapter to Agnes Smedley, more as a demonstration of his knowledge of the writer’s life than to drive the narrative forward. There are long-winding history lessons dedicated to the ban on the export of monkeys by Morarji Desai or Kissinger’s theory that sex-starved nuns were plotting to kidnap him. The author forgets that Google exists.

After 200 pages a newspaper clipping of what looks like a book review by a displeased reviewer is put on show. In that, the book is described as affectless, but not in the way Chekhov made affectlessness a supreme kind of art. I felt something similar here.

There are some writers — like Truman Capote, Manu Joseph, Chimamanda Ngozi Adichie or Teju Cole — who can tread both waters, of fiction and non-fiction, skillfully. Most writers can’t. At best I would call The Lovers an experimental nonfiction novel, at worst I would call it an author’s personal journal.

The writer is the multiple award-winning author of The Trouble With Women, Happy Birthday and One And A Half Wife. You can follow her on Twitter @MeghnaPant