Insanely wealthy Indian men do not exactly shine in her recollections. 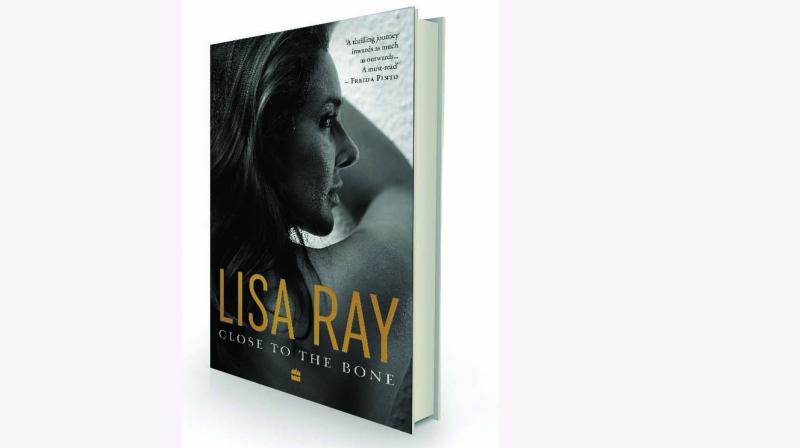 Close to the Bone By Lisa Ray HarperCollins Rs 599

I was born to be a nomad.” The opening sentence of Lisa Ray’s memoirs plays constantly in your head as she zips through many countries like a frenzied maniac. Sometimes for work, sometimes to be with family and occasionally to enjoy reclusive stretches that help her to travel inside her head.

While Ray’s memoirs may begin in Toronto and end in Toronto, Mumbai has the lion’s share of her recollections because Mumbai made her.  Or, more specifically, Maureen Wadia, the dynamic owner of fashion magazine Gladrags (and also the wife of one of India’s leading industrialists, which helps considerably!) made her. They met when Ray was in Mumbai in 1991 on a long 6-month vacation with her parents. Jogging on Juhu beach attracted unwanted attention from men — including a chap called Shekhar  Kapur who jogged after her, handed her his card and said “You should be in the movies.” Ray partied a lot with the usual Juhu Bollywood crowd, made a lot of contacts, and at one party an older Parsi man said to her: “You really should meet Maureen Wadia. She likes your type.”

“What’s my type?”
“Half-breed,” he said. “She’s an Anglo-Indian herself.”
“But I’m not...”
“Cheers my dear. Let’s drink to being in a pretty good place. Just don’t be boring and blather on when you go across to meet her.”

Ray finally met Wadia and was cover girl for Gladrags. Then she went back to Canada all set to start life in a university, when an accident threw her plans out of the window. In the midst of all that trauma, her Gladrags swimsuit cover had set India on fire, and her phone never stopped ringing. A determined Wadia flew in to Toronto and flew out with Ray.

Ray’s recollections of Mumbai are always spirited and often delightfully wicked. If you didn’t know this already, beautiful people are the ugliest ever, and those bits are fun to read. Ray finds the older women more intriguing than women her age: “In their mid-thirties to forties, they were that brand of socialite found in every city in the world, ex-models or air flight attendants who had reinvented themselves as either interior designers, or fashion designers.” It was a world where the rich and influential partied with the beautiful, where it was cool for an extremely powerful media fat cat to leer at models and offer them the coveted Miss India title.  Hats off to Ray for also noticing the darkness and bigotry that was descending on Mumbai and India too, after the demolition of the Babri Masjid. She refers to it several times in tones of dark despair.

Insanely wealthy Indian men do not exactly shine in her recollections. There was this hilarious account of the son of an industrialist who was a shoe closet groper.  A long relationship with a powerful, shady, ruthless Mr Fixit-type who liased between senior IPS officers, politicians and Bollywood stars—he turned out to be just a very dangerous frog. Indian origin Brits don’t come off as heroes either. There are some who make their harassed aides scour fancy hotels for trophy wives (Ray was spotted in an elevator), a just-jilted boyfriend who attempted to strangle her—she escaped and was rescued by a passing stranger. Any lingering fondness Ray has for her exes are restricted to the non-Indian men in her life and frankly, who can blame her?

A long search for spiritualism (the usual side effects of stardom) is also part of her many journeys. So you have the usual Shirdi, ashram and Buddhist monastery runs. Buddhism appears to have triumphed, and bouts of speed reading may be required to scurry past teachings, philosophy, etc. Extremely dull if you’re not into it.  But perhaps it prepared Ray for her hardest battle yet, with cancer.

Ray’s fight with cancer is handled with restraint, courage and humour. She’s willing to go through unbearable torture, try new treatment like stem cell transplants and even giggles at the thought: “Say ‘stem cell’ to the average person and an image of a railing George Bush comes to mind.” You sit with her in chemotherapy waiting rooms, and she makes you notice other people who are suffering like her. That’s when you like her for who she really is, and not for what she’s achieved.

Ray’s memoirs will probably attract different sorts of readers. If you’re a hardcore fan or an aspiring model, you probably will enjoy this book, perhaps love it to bits. If you were part of her social life in Bombay/Mumbai, you will read it with trepidation, and may heave a sigh of relief at the end of it all—or not! If you’re fighting a life-threatening disease, it will inspire you to keep going.

It must be said though that the book lacks pace: odd, because there are so many highs and lows.  Mundane details should have been trashed, they make the memoirs drag and inspire yawning bouts. It’s far too repetitive as well. After a while you stop feeling sympathetic when you hear that plaintive I-don’t-fit-in-anywhere-in-the-world wail. Particularly when you’re reminded equally often that Ray thoroughly enjoys living like a gypsy! Now a word of caution: if your eyesight is poor, wait for the e-book version because the point size is so tiny, words look like ants crawling around the pages.