An anthropologist works out what it is to be a Maoist

The Central Committee leader she was to meet was the soft spoken and urbane Gyanji (name changed), a much-wanted man on the police list. 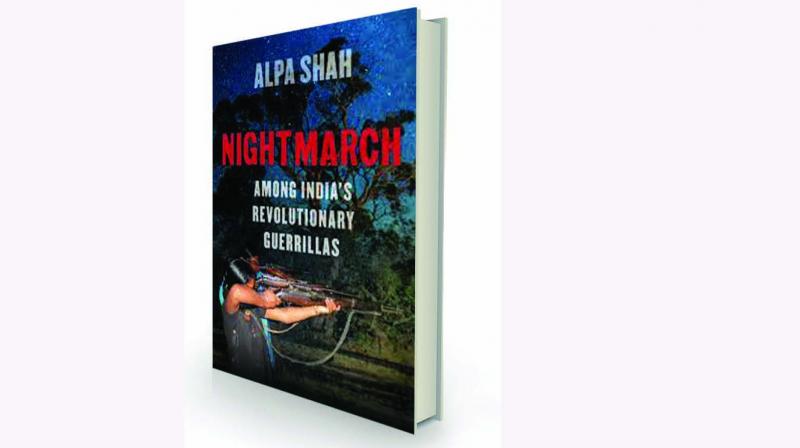 Can an academic study also double up as a riveting thriller? London-based anthropologist, Alpa Shah, has managed this seemingly impossible amalgam by injecting a sense of adventure, suspense and drama into her 327-page inquiry into the Maoist movement in Central India. And the methodology she adopted for her exercise was the one famously recommended by noted Polish-born British social scientist Bronislaw Malinowski who advocated “participant observation” rather than armchair study for serious ethnographic research.

True to Malinowski, Shah spent eighteen months in Lalgaon, deep in the forests of Jharkhand among the Adivasis, who form the core of the support base of the Maoists. In the process she learnt their language, ate, slept and lived like them. Such an extended stay, she believed, would help her get a more nuanced understanding of the Adivasis and why they reposed faith in an armed rebel movement which many averred was fighting a losing battle against the might of the Indian State.

Shah had gone with modest ambitions of an ethnographer and had no great expectations of wrangling a detailed interaction with a top Naxal leader. But fortuitously that opportunity came her way in 2010 when a long-awaited interview with a Central Committee member of the Maoists suddenly materialised. For this meeting, Shah had to travel from Lalgaon to a guerrilla camp in neighbouring Bihar. She set out on what she thought was a two-day mission which proved much longer.

The Central Committee leader she was to meet was the soft spoken and urbane Gyanji (name changed), a much-wanted man on the police list. He was typically once part of the privileged educated upper caste who in their youth renounced the comfort of their homes and pledged to become “professional revolutionaries” in the mould of the Marxist-Leninist rebels to wage an armed struggle against oppression, injustice and inequality in society.

Shah had run into Gyanji — a mathematics major who recited Percy Bysshe Shelley and quoted at will from George Bernard Shaw — a year earlier in Lalgaon and subsequently met him briefly on a few occasions. But the meeting in the jungles of Bihar would be one that would be an extended one. However, it turned out to be more than an interview when after two days at the guerrilla camp Shah learnt that Gyanji would be marching with a platoon back to Lalgaon to attend a state-level meeting of Maoists there. Shah wondered if she could accompany him on the march-an arduous trek of 250 kms through dense jungles undertaken at night to avoid the scrutiny of the security forces and the police.

The eager researcher had her way. Disguised as a male guerrilla she joined Gyanji and the platoon and set off on an adventure that would take all of seven nights. Nightmarch: A Journey into India’s Naxal Heartlands, is on the face of it a diary that records events as it unfolded from day one to day seven. But the book is much more than that because Shah weaves into the narrative information that she collated during her earlier research. As a result, what emerges is a vivid portrayal of the Maoists as well as the Adivasi community they profess to serve and what it means to survive in a conflict zone where the state often targets its own citizens.

It is obvious that Shah’s sympathies are with the Adivasis, “some of the most marginalised people in the world”. She had observed first-hand how they were exploited by the local elites who siphoned off development funds meant for them. How management consultants of multinational corporations schemed with the government to acquire land from the Adivasis to set up mining projects. She saw the virtually non-functional health and education infrastructure provided for the community and the hardships Adivasis faced once they were ousted from the forests that they traditionally inhabited.

As for the Maoists, Shah manages to see their human side. But there is no attempt to romanticise their narrative. She does not hesitate to bring out the contradictions that riddle the movement. Thus, the writer notes that the Maoist attempt to create an egalitarian society essentially involves demolishing existing capitalistic structures that create inequality. But to sustain and fund the movement involves exploiting the very economic system that the Maoists wish to demolish. This, she says, has led to tenuous relationships with mining corporations and other vested business interests. It has also led to corruption in the ranks with many lured by their desire to amass wealth and prestige in a society that they supposedly renounced and are fighting against.

Similarly, while Shah sees merit in mobilising marginalised communities to fight inequality and injustice, she sees little merit in the use of arms and violence towards this end. The conclusion she draws is that in an armed struggle the use of weapons and assembling bombs becomes the primary focus and the creation of an equitable society and addressing issues of the people becomes secondary. Moreover, battling the state in India had become an uneven and protracted struggle in which the government forces have inflicted considerable damage on innocent communities that the Naxals live amidst.

Last but not the least, Shah brings out gender discrimination. She notes that the casteless, classless movement where women are treated as equals is dominated by men from upper class or elite backgrounds. This is rather ironic since the societies that the Adivasis come from are more equal and gender-sensitive than the structures set up by the Maoists.

One fascinating revelation that emerges from Shah's study explains what drew the Adivasis to the Maoists. According to her, it was the “ideology of egalitarianism which guided their humanness” that endeared Maoists to the people. The Naxalites were careful about how they spoke and the tone of voice they adopted while addressing people. They paid attention to little things like leaving their footwear outside before entering a home, sitting on the floor, sharing food and drink and respecting tribal customs. It was these “little things” that earned trust and respect.

As for Adivasi youth joining the Maoists, there were varied reasons: “a fight with a parent or sibling, a love affair forbidden in the villages but accepted in the Naxalite armies, a desire to leave home and see another world”. Some would join, leave and re-join. As Shah puts it: “Moving in and out of the squads seemed like the most natural thing to do for the Adivasi and lower-caste youths who joined the guerrilla armies.”

Some critics might say that Nightmarch is a simplistic analysis written with the western audience in mind. Such an assessment would be unfair given that most Indians have limited access to information on the Maoists movement and its current status. Most published work either see Naxalites through the perspective of the state as enemies or glorify them as revolutionaries. In that context, Shah's work is a balanced look at the Naxal heartland with the social, historic and economic perspectives kept in context.

In conclusion it would be injustice to the writer if we do not quote a line from her disclaimer at the beginning of an unputdownable book — “This is a work of non-fiction.”