Books   29 Nov 2019  Liberation songs: Freda and the theris were not to be deterred
Books

Liberation songs: Freda and the theris were not to be deterred

Gotami willingly accepted all the conditions and joined the Sangha happily thus beginning a long line of women monks that endures to this day. 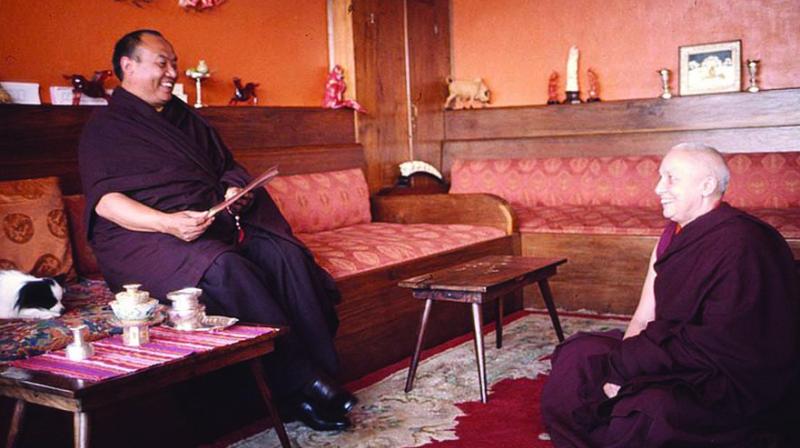 The actor Kabir Bedi once wrote a very moving piece on his mother in an issue of JS (now defunct) in the late 1960s which was reprinted after his mother died in 1977. His mother was ordained as a Buddhist nun in 1966 and Kabir recalled the deep anguish, bewilderment and shock his mother’s decision (she was of English origin) caused the family. He had been a student at St Stephen’s College then and recalled that theirs had been a happy family with three children that had begun with a whirlwind romance that had begun at Oxford and culminated in marriage.

I was intrigued then with the life of this remarkable woman Freda and resolved to read up on her some day. We are now fortunate that Andrew Whitehead, a journalist and a former BBC correspondent in India has written a wonderful biography, The Lives of Freda – the Political, Spiritual amd Personal Journeys of Freda Bedi. In the book, Whitehead states that Kabir had been told at the college hostel to go and see his mom who was in town. She was staying in Nizamuddin and Kabir recalls, “I went there and I suddenly saw her and she had shaved her hair and she was in Tibetan Buddhist robes. Firstly, there was the shock of seeing her like that, and secondly, was the feeling of betrayal that she hadn’t told me before she did it.”

Freda hints that there may have been opposition or at least some pressure to make her change, had her decision been discussed in the family. The early women nuns faced determined opposition to the setting up of a separate holy order.

The opposition came from the Buddha himself. Buddha preached in Pali so that his message could be understood by the common people. And people included everyone. Everyone regardless of caste, status or gender, was united in Buddhism, the Buddha preached, “as are the rivers in the sea”. The three authorities of Buddhism were the Buddha himself, the “Dhamma” or the rules of Buddhist life, and the “Sangha” or the ascetic community. The Buddha believed that both men and women could attain ‘nirvana’ and were capable of receiving rigorous training and philosophical education and could even be entrusted with the task of preaching the Buddhist doctrine. Yet, when there was a request from a woman to be ordained and to join the holy order or the “Sangha”, the Buddha refused.

Susie Tharu and K. Lalita in their pathbreaking book Women Writing in India – 600 B.C. to the Present record that this request did come early in Budhha’s life and to the Buddha himself. Based on records of exchanges in the Sangha and on the status of women, Tharu and Lalita note that Mahapajapati Gotami, the Buddha’s royal foster mother, wanted to join the Sangha. She, of royal blood, walked long distances though the heat and dust to find the Buddha and request him but he would not hear of it. Repeated requests were refused repeatedly. There was no moving the Buddha who was steadfast in his decision.

At the time, we must remember that all of the Buddha’s preachings were oral in character. There were no written-up texts. The texts or the “Sutras” only came up later after the ‘Sakhyamuni’s death at the initiative of the disciples who felt that succeeding generations should not deviate from what the   Buddha had preached. It was one such disciple Ananda, prodigious of memory, and perhaps moved by Gotami’s pleas and entreaties, mustered up the courage to argue with the Buddha. There was nothing in the tenets of the Buddha’s preachings, said Ananda that forbade women from entering the Sangha or ascetic order. Today, it’s interesting to note that when entry of women to a holy shrine is a matter that is decided by the highest court in the land, Ananda’s appeal was to the Buddha himself, the highest court at the time. We do not know what were the arguments Ananda marshalled in his defence, for there were no written texts, but powerful and persuasive they must have been. And all this against one who was the originator of the preachings themselves!

The Buddha was finally compelled to agree but he laid down eight very stringent laws which all women would have to obey. Among them were a few that illustrate that the status of men and women in the Sangha were not quite equal. No ‘theri’ or woman monk could rebuke a ‘thera’ or male monk, but the converse did not apply no matter how senior the theris may be. After a very stringent two year novitiate, a theri was to seek confirmation from both the male and female congregations but the thera had to submit himself to an examination by the male congregation only. But the women were not to be deterred.

Gotami willingly accepted all the conditions and joined the Sangha happily thus beginning a long line of women monks that endures to this day.

The first Buddhist women monks were extremely creative too. Charles Hallisey has translated and published for the Murty Classical Library, Therigatha — Poems of the First Buddhist Women. Written in the sixth century BCE, by senior women monks, the poems, many of them written by monks who were contemporaries of the Buddha, are songs of their experiences in the Sangha and outside. Dhammapala, the sixth-century commentator on the Therigatha considered the poems “inspired utterances”. The poems which ranged from one verse to 40 verses, conveyed a sense of joy and euphoria felt by the women monks and were poems of liberation.

It was this great tradition of women Buddhist monks Freda Bedi joined when she was ordained as a Buddhist nun by the 16th Karmapa Lama at the Rumtek Monastery in 1966. The literary output of these remarkable women has continued over the years, as we were reminded during a visit to Kyoto in Japan this summer. The Tale of Genji written by a remarkable woman court attendant, Murasaki Shikibu in 1000 CE in Kyoto is considered by many to be the first great novel in world history. Not many know that the protagonist became a Buddhist nun half-way through the novel and later died but the novel continued beyond her lifetime!