Nidhi is reluctant to have this loose cannon as the brand ambassador, but caves in due to pressure from her boss. 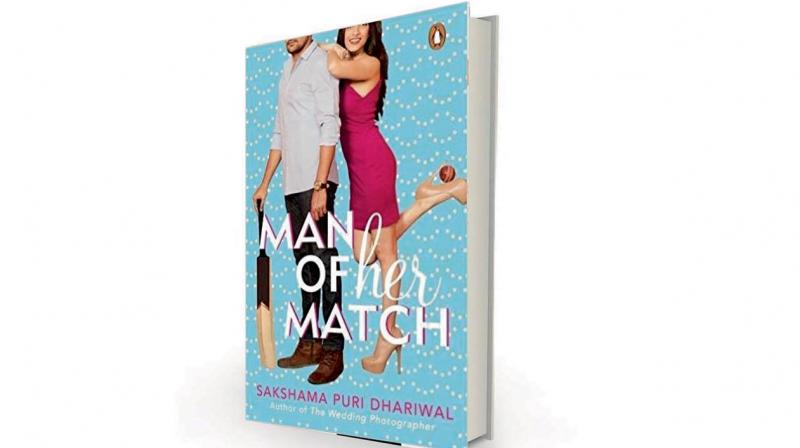 Sakshama Puri Dhariwal’s latest book Man of Her Match is a lot like her first book (The Wedding Photographer) which I had reviewed last year. After reading one book by an author you kind of know what to expect from the second ride, as by then you become familiar with their story-telling skills and style of writing. But the best thing is that you can also compare it to their first book and see how far they have taken their craft.

Going by the title, Man of Her Match, you know it’s going to be about cricket. It’s the story of 26-year-old Nidhi Marwah, a marketing professional working with a newspaper called News Today, who has to collaborate with the enfant terrible of Indian Cricket team — its star batsman Vikram Walia who is supposedly dating the Bollywood actress Natasha Sahay. Vikram, known as much for his off-field shenanigans: sexual exploits, offensive language and foul temper, as for his cricket skills, has been kicked off the team for roughly shouldering an umpire as a protest and show of indignation over an LBW decision and gets a five-match ban. The big bad boy of Indian cricket punches Bollywood actor Shaan Kapoor in a nightclub in Mumbai, and thanks to smartphones this video goes viral and the Board of Control for Cricket in India sets up a disciplinary committee to decide the cricketer’s fate at the end of the month.

Luckily for Vikram his manager Monty Bhalla pulls a few strings to make him the brand ambassador for News Today’s corporate social responsibility campaign of EducateIndia, after Aamir Khan pulls out. The aim of this campaign is to redeem Vikram’s image in the eyes of the people and the disciplinary committee, so that he is reinstated back into the Indian Team.

Sadly for Vikram the marketing professional heading this campaign is Nidhi Marwah, his childhood friend and now his sworn enemy. Nidhi and Vikram hate each other; each one thinks the other has broken their heart when they were 14 years old, and the 12 years they have been estranged hasn’t diminished their animosity.

Nidhi is reluctant to have this loose cannon as the brand ambassador, but caves in due to pressure from her boss. Vikram is equally reluctant to work with Nidhi but agrees to endorse the campaign to redeem his bad boy image, and therein starts the fireworks that sizzle throughout the book.

Nidhi’s impression of Vikram is based on the image the media has created for him, she considers him an arrogant, self-centered, spoiled casanova and the wrong person to endorse this campaign. Nidhi has known Vikram from the time they were eight years old, when Vikram came to stay with his grandmother who was the Marwah’s neighbour, after his parents died in a car accident. Tomboy Nidhi has no friends and is forced to play with the family chauffer, security guard and cook, she goes over to her neighbour’s house to invite Vikram to be her new friend and playmate.

The scene where eight-year-old Nidhi has been snubbed for the entire month by Vikram and returns dejectedly after being unable to coax him to play with her once again, is one of my favourite scenes. It was at that point I realised that I would be rooting for Nidhi and would stick with her till the end of the book. For me that scene, narrated in flashback, captured the poignancy of the lonely girl, unable to convince the new boy next door to play with her. But, fortunately, something in the girl makes the boy break the shackles of his solitude and join her. And soon they become best friends, protective of each other and constantly guarding each other’s backs.

In Nidhi, Dhariwal has created a likeable character and Vikram Walia in spite of his bad boy image also endears himself to the readers. I could see Anuja Chauhan’s strong influence in Dhariwal’s writing, from the choice of topic: cricket, media and brand marketing to the setting of the book which is Delhi. I’ve to admit that Dhariwal has managed to push a book that would have been dismissed as a run-of-the-mill chicklit into romcom territory, she has also been smart enough to incorporate several themes: childhood friendships, father-daughter relationship, sexist suitor, obsession with a celebrity’s life, but her writing style and the story itself makes her book a candy floss kind. At best her book hovers lightly over the romcom territory and will appeal to readers who like their stories sweet and mushy.

To know whether destiny gives Nidhi a second chance with her childhood love, you will have to read the book. The writing by and large is simple (don’t look for literary brilliance) and the narrative flows easily and I must mention that her second book is a vast improvement from her first book which was very one dimensional. Man of Her Match follows a well-beaten track, you can kind of guess what happens next, but in spite of that shortcoming it’s a breezy read largely due to the affable protagonists. What I found disconcerting about the book was that in spite of being an independent woman Nidhi’s cowering act before her father was a bit too much to digest for me. Another thing that I found odd was the lack of chapters, but frankly speaking that was not a major issue. A grouse I have is that Vikram is often described as the poster boy in the story, but the guy on the cover doesn’t capture the delicious sexiness of the star cricketer. An eye-catching cover would have attracted more eyeballs.