High on idealism, but weak on plot, dialogues 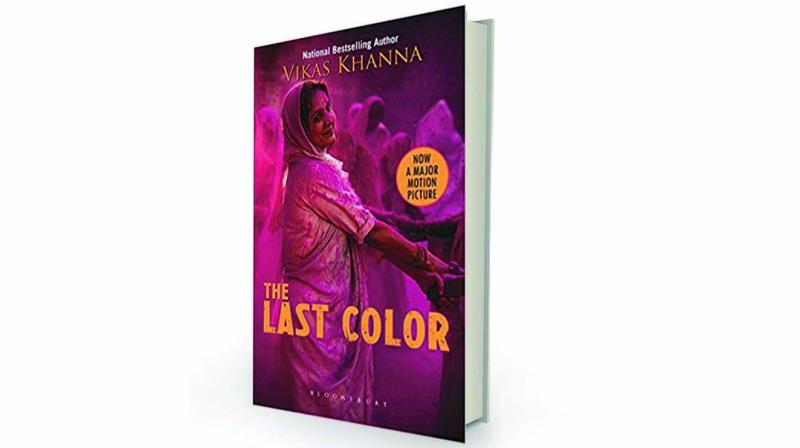 The Last Color is not your typical debut novel. It is hardbound, complete with inserts of the to-be-released movie stills and was launched at the 2018 Cannes Film Festival, with both the book and movie trailer being released simultaneously. This fanfare, a predictable accompaniment to celebrity launches, has everything to do with celebrating the author’s reputation rather than the quality of writing — Vikas Khanna is an Indian-American Michelin star chef, restaurateur, cookbook writer and filmmaker. He’s been on TED talks, Mega Kitchens and MasterChef India. His own remarkable life circumstances trended on Twitter recently when he acknowledged how he relives the day a Muslim family saved his life during the Mumbai 1992 riots by fasting for a day every year during the holy month of Ramzan. Religious ferment gone wrong and its potential for adopting an antithetical attitude towards basic humanitarian ideals also shadows the theme of his first novel.

The story of The Last Color was inspired by a Holi shoot Khanna did in a temple in Vrindavan when he saw widows isolated from the festive joy, forced to stand apart in their white saris. His manuscript proved prescient and saw light of day following media buzz around the 2012 Supreme Court observations that did away with the traditional societal objections to widows participating in Holi.

Keeping in mind the outcome of this “landmark” decision, The Last Color is structured to begin and end with the agitation around it.

This might have been a nice framing device if it were skilfully used.

A young advocate visits Varanasi 20 years after she was adopted from the streets, to show her support for the Supreme Court decision. The flashback sequence that takes up the entire novel, barring the opening chapter and an epilogue, details her past life and friendships.

We see Choti when she was a street child who survived by tight-rope walking, and slept nights in an underfunded, privately-run orphanage. When the story opens, Choti has two adult friends: the vivacious but sad prostitute eunuch Anarkali who lives alone, and a widowed elderly friend Noor, who is unable to leave behind the dreariness of the widow’s life in an ashram. It is this widow’s agony at being barred from a deeper and richer spiritual life that Choti finds hard to endure, and it ties into the plot of the novel. By the time the story-in-flashback closes, Choti has lost many things, is narrowly saved from the clutches of corrupt cops, and has gained a new grownup friend — a woman who later adopts her and becomes “Ma”.

It is meant to be a redemptive story. Unfortunately, the incorporation of the Supreme Court verdict feels like a last-minute graft rather than an organic and rooted part of the story. For one thing, the cringe-worthy dialogue between Choti’s mother and her own responses as a mid-20s advocate seem off-key and misplaced. Not only are they wooden, they make little sense, considering that the woman known as “Ma” is the same person who in the world of the flashback takes on corrupt police officers and their terrifying threats on their own turf, with no backup support.

It is hard to accept that a woman who can wrench a dying child from the clutches of police goons and who goes on to adopt her can speak in the kind of sentimental, anxious drivel that opens the novel.

“Ma nodded. ‘I was watching the evening news and had to listen to that politician Ramchandra and his supporters stave off all charges against him again. I know you are working to bring him to justice, but I am really frightened that you are standing up too tall against these corrupt, powerful goons. It doesn’t give me a good feeling.’ To which Choti replies, ‘Amma, you know I have no choice. It’s my sworn duty.’” …Choti reflects, “In her mind, she kept hearing the daily chant Ma deployed to make her ever cautious about her job, dangerous, very dangerous, dangerous, very dangerous, stay away from criminals, culprits and corruption… Ma would even call her at office to chant her lecturing mantras over the phone.”

Or later, Ma says, “I could always come with you child… we’ve worked all our lives for this moment. I’ve been there with you before. Let me come, child, just to be close at hand in case it gets too dangerous for you.” Again, Choti replies, “Ma, it’s you who has prepared me every day just for this one day. You are with me every moment… Ma we won because of you. You were the one who nurtured the truth, strength, and dignity in me to fight for people’s rights. It was you who made this day possible after fighting for years in the Supreme Court in Delhi. Now we are ready to face Ganga Ma. We have kept our promise.”

High on sentimentality and idealism, The Last Color would have done well to concentrate more on plot and realistic dialogue, and less on painting heart wrenching pictures and forced conclusions. As it is, Khanna’s prose is too caught up with its own artifices and poignancy to deliver an experience that feels genuinely moving.

Karishma Attari is the author of I See You and Don’t Look Down.