How often do we place ‘reason’ before ‘identity’?

A lot of innovative ideas were thrown up but the allotted time was over before the mike could come to me. 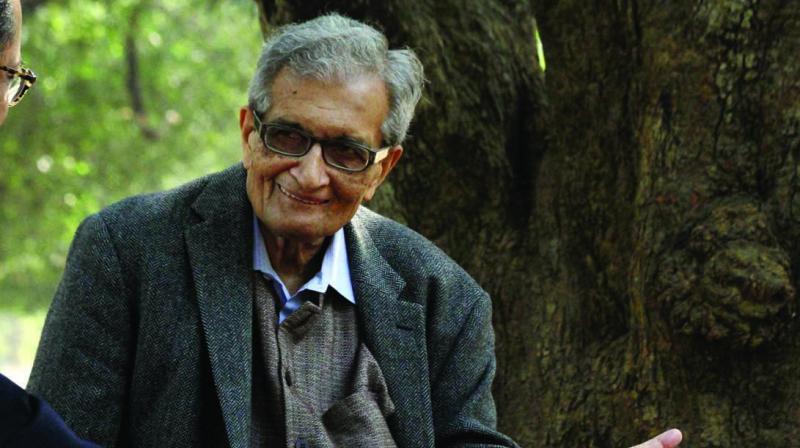 Amartya Sen, who is the author of Reason before Identity.

The recent spat between two senior lawyers in the Indian Supreme Court is a symptom of a larger malaise or an “accepted” way of looking at things. During the hearing of the privilege motion against Prashant Bhushan by the attorney general, K.K. Venugopal, senior lawyer Anand Grover rose to say he was representing Ms Jaisingh. One of the judges did not hear him properly and asked Mr Grover, “Who, surely not Indira Jaisingh?” — the latter being well known and also a former additional solicitor general of India. While Mr Grover was clarifying, Mr Venugopal got up to say “Why don’t you say you are representing your wife?” Ms Jaisingh then got very agitated and objected strongly, saying that she was a senior lawyer in her own right and it was wrong to label someone as a “wife, spouse or husband”. Later, she apologised to Mr Venugopal for raising her voice and he, in turn, praised her qualities as a lawyer.

The incident in the court may have been amicably resolved but the larger issue of characterising or labelling someone in society remains and sometimes with sinister implications, especially in societies which are multi-ethnic in character with a plurality of cultures.

At a symposium on the contemporary relevance of design in architecture, one of the participants thought he would involve the audience too in the discussion. He took the mike and went to a few and asked them to define what identity meant to them in a single word. A lot of innovative ideas were thrown up but the allotted time was over before the mike could come to me. On the sidelines, I told the two panellists, both senior architects, that had they come to me, I would have defined identity in a single word — “fear”! Intrigued, they asked me to clarify. I said in contemporary societies, polarisation and differentiation was creating more confrontation rather than consensus. Identity was creating fear among ethnic and cultural minorities who felt they did not belong. Majoritarianism and a compelling need to conform and merge were creating tensions in societies known for tolerance and pluralism.

I gave an interesting example from the noted economist and philosopher, Amartya Sen’s work, Reason before Identity, the subject of his Romanes Lectures and subsequently, published as a book. Once, Mr Sen returned to London after one of his innumerable trips abroad. At the immigration counter at Heathrow Airport in the form against the column “address in England”, Mr Sen scribbled “c/o Master’s Lodge, Trinity College, Cambridge University”. The immigration officer had raised his eyebrows at this and said, “The Master’s Lodge? Are you by any chance a friend of the Master?” Mr Sen had to gently then remonstrate that he indeed was the Master!

We revisited this again when we had Mr Sen over in Delhi for the launch of his book “Hunger and Public Action” along with Jean Dreze. He was booked to stay at the India International Centre and I was at hand to receive him after he returned from a television interview. This was to ensure that Mr Sen got one of the few “suites” on the first floor that the IIC gives to the privileged few, mostly trustees, governing council members and distinguished visitors. While Mr Sen was signing the guest register, I whispered “Reason before identity”. Mr Sen laughed and mentioned this to Mr Dreze at lunch. I then told Mr Sen and Mr Dreze that when I had mentioned the Heathrow incident to my friends at the British Council at a meeting in Delhi, the then director had said, “Surely, an immigration officer was not expected to recognise Amartya Sen as a Cambridge Master?” “This was quite reasonable,” I had said but what could be termed objectionable was the arched eyebrow and the look of incredulity that accompanied the immigration officer’s query. This, in spite of a large number of academics of Indian origin working in universities in England and in the US. More specifically, the economist I.G. Patel had completed a distinguished term as the director of the London School of Economics and Political Science.

Though Mr Sen had been amused at the experience at Heathrow and was to ponder on being the Master of Trinity and whether he could be a friend of himself, he was to work on the larger issue of identity in plural societies and the concept of identity was to be expanded in works apart from Reason before Identity, Identity and Violence and The Argumentative Indian apart from the very seminal lecture at the British Academy on “Other People”. Mr Sen has said, “Our relations with other people are greatly influenced by the way we identify with some and not with others. Our identification with others in one group or another can have a strong effect on our thoughts and feelings, and through them on our deeds as well.” While this Mr Sen has defined “social identity”, it can also subsume within it a plural identity as well. A person may have an individual self-identity but as a member of a social or political group, may have a group identity as well. In a plural society, where there are multi-ethnic and socially and culturally distinct groups, the “deeds” performed by individuals as an exercise of their group identity can indeed be ominous.

This is perhaps the only way we can explain the pogroms against the Jewish people, the ethnic cleansing in Bosnia, the genocide in Rwanda, the attacks on the Kurdish people and closer home, the Nellie massacre and the Gujarat and Sikh riots. History has shown the dangerous implications of polarisation in a society with diversities. If our political leadership constantly harps on the factors that divide people rather than on what unites them, conflict can be the result and in many cases, this is endemic.

The history of Partition in the sub-continent has shown how passions can flare when self-identity is subordinated to a group identity. A moot question that needs to be asked in these times is whether a concerned individual would have acted as such if not in a group? On a larger scale, a society’s level of tolerance of diversity and plural identity is precarious, for in a conflict situation it’s always the poor, the weak, the marginalised and the minorities who become the major victims.

Most countries of the world harbour immigrants. People migrate for a variety of reasons but mostly to secure a better future for themselves. Though laws have tightened against large-scale immigration in almost all countries, there is still a growing list of ever-waiting hopefuls. For the migrants, while life may be hard, it can all be endured provided the treatment meted out to them is just and on how the host country is able to tolerate diversity and in some cases, even embrace it. The words of Jacinda Ardern, the New Zealand Prime Minister, in the wake of the horrific killings at the mosques at Christchurch, are telling. “What has happened in Christchurch is an extraordinary act of unprecedented violence. It has no place in New Zealand. Many of those affected are members of our migrant communities. New Zealand is their home. They are one of us.”

This distinction between self and group identity was articulated recently by the noted and best-selling writer Ruskin Bond. Writing in a textbook for middle-school children on why he chose to remain in India, Mr Bond had said, “But it’s more than the land that holds me. For India is more than a land, it’s an atmosphere. Over thousands of years the races and religions of the world have mingled here and produced that unique, indefinable phenomenon — the Indian. Oddly enough, I am one too. I am as Indian as the postman, the paanwalla or your favourite movie star. Race did not make me an Indian. But history did. And in the long run, it’s history that counts.”

On a lighter note, Norman Tebbit, the British conservative politician irked by the constant defeats of the English cricket team, devised the Tebbit Test in 1990. The test was intended to test the “loyalty” of the immigrant audience at a cricket test match. If the immigrants cheered more for the visiting team from Asia or the Caribbean, it meant that they had not integrated into English society well enough. In the event, Mr Tebbit probably had a sinister scheme of re-educating the masses for better integration much like the Catholic Louis XIV forced the Protestants to recant their faith in favour of the one true religion.

I was reminded of Mr Tebbit when relatives, long-time migrants to Australia, arrived home from Sydney recently. Passionate about cricket, they would even travel out of Sydney to watch the Indians playing cricket against the Australians at other venues. There are no guesses as to which team they cheered the most. They failed the “Tebbit test” by a good margin. Pretending shock at their behaviour, their host friends asked them to surrender their Australian passports in good humour.

I suggested the best answer for the Australians would be to let their bats do the “talking” like the Indian cricket captain!