A story relevant for all times. A book I would urge people to read, a book worthy of being read more than once. 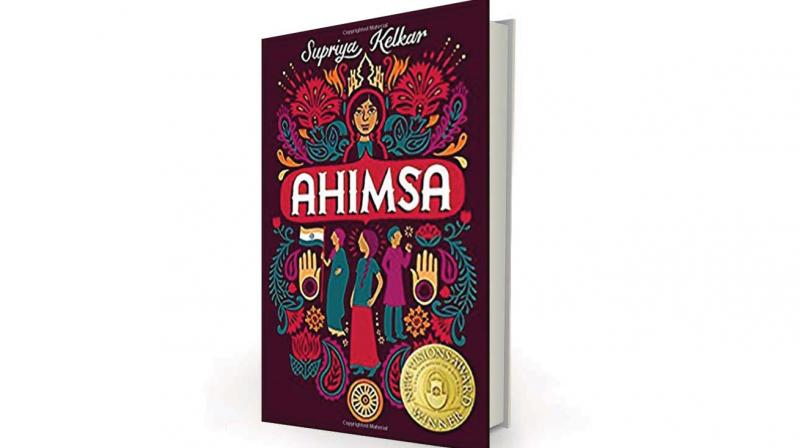 The cover image of Ahimsa written by Supriya Kelkar is gorgeous and the title gives a big clue about the book. I was delighted when my editor sent me the book for review. The moment I started reading, I immediately connected with Anjali Joshi, the ten-year-old protagonist. Though Ahimsa labelled as historical fiction comes under the middle-grade category, it is a book for all ages, adults will like it as much as the middle-graders.

The story is set in the fictitious town of Navrangpur, the year is 1942 when India’s freedom struggle was at its peak. The first chapter starts with Anjali and her best friend Irfan standing outside Captain Brent’s bungalow. Captain William Brent is a British officer who is Anjali’s mother, Shailaja’s, former boss. Anjali paints a black “Q”, short for “Quit India”, on the bungalow. She screams quit India, alerting Captain Brent who chases her through the streets of their small town. Trying to escape the British officer, Anjali and Irfan land up in the untouchable’s basti. They see Mohan, the thirteen-year-old untouchable — her family’s toilet cleaner; he earns his living removing the waste from people’s outhouses, playing gilli-danda with other children. Through a strange quirk of fate, Anjali is saved by her mother who whisks her off under the British officer’s haughty nose.

Anjali belongs to the brahmin class, living a comfortable life in the elite neighbourhood of Madhuban colony, with her parents and her great uncle Chachaji. Chachaji with his prejudices against other castes and his biases against working women is a hard nut to crack. Anjali shares a special bond with Nandini, the family cow housed in a tiny shed.

Captain Brent is an intimidating British officer who treats all Indians, irrespective of caste, as untouchables. Anjali has several face-offs with Captain Brent, in one of them where he calls all the Indians pests, she replies, “We’re not the ones invading someone else’s home like a cockroach.”

These were the times when radios were popular, and we have scenes where the  Joshi clan with their maid are listening to Gandhi’s recorded message on radio, urging Indians to purge themselves of hatred, extolling the path of ahimsa or non-violence and asking each family to give one member for the freedom movement.

Anjali’s mother joins the freedom movement as Anjali’s father has to work to support the family. Her mother burns their foreign-spun clothes, seeing it as a sign of enslavement and starts wearing homespun khadi clothes. Anjali, reluctant to burn her exquisite collection of ghagra-cholis hides her favourite outfit under the mattress to save it from the fire. It’s these small acts that make Anjali so relatable and real. To show her solidarity with the untouchables, Anjali’s mother cleans her outhouse herself, carrying the waste in a wagon to the dump yard.

Later Anjali joins her mother in the basti after school, to give prasad to the  untouchables. She tries to convince Mohan to leave his toilet cleaning and take up some other work. Anjali and her mother join other freedom fighters in educating the untouchables. Mohan refuses to join the classes saying nothing will change, he resents being called a harijan, he feels the term is insulting. Mohan’s anger raises doubts about Gandhi’s ways in Anjali’s mind.

Though initially Anjali is reluctant to join her mother in India’s struggle for freedom, but after her mother is jailed by the British, she takes up her mother’s mission. In Ahimsa we see India’s struggle for independence through the eyes of a sensitive and vulnerable ten-year old girl, who through the course of the narrative sheds her biases against the untouchables and becomes their biggest crusader. Even when Anjali’s world is flipped on its head, her friendship with Irfan breaks when Hindu-Muslim riots hit Navrangpur, she is caught in the midst of the rioters and is saved at the last moment by Captain Brent. Still Anjali clings on to her mother’s mission and carries it forward, fighting for the untouchable’s rights and for India’s freedom.

Kelkar’s story moves at a decent pace, it is actually quite a page-turner. What makes the book special is that Kelkar doesn’t segregate her characters as black or white, infact she paints many characters grey. Every character makes mistakes, owns up to it and is given a chance at redemption.

The book is inspired by Kelkar’s great-grandmother’s experience working with Gandhi. Ahimsa highlights the freedom struggle, the way the untouchables were treated, the story introduces readers to Babasaheb Ambedkar and his ideas.

For people not familiar with India’s struggle for freedom, this book will be an eye-opener. I liked the fact that Anjali’s parents treated her as an adult, explaining complex terms in a simple yet effective way. They didn’t mollycoddle her. Anjali knew what exactly she was fighting for and why.

Through the course of the story we see Anjali questioning Gandhi’s ideas and treating him as a human capable of making mistakes. The characters in the book are extremely appealing. A perfect book for people to familiarize themselves with India’s struggle for freedom. A story relevant for all times. A book I would urge people to read, a book worthy of being read more than once.

Rachna Chhabria is a Bengaluru-based children’s author and a freelance writer. Her soon to be published book Festival Stories Through The Year has made her fall in love with our festivals and rituals.