Then starts the familiar routine of telling family and friends to look out for prospective matches for Madhurima. 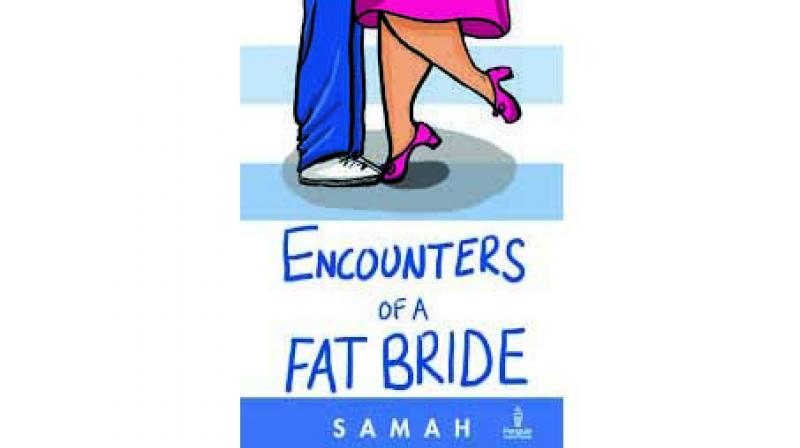 From the cover image and the title of Encounters of a Fat Bride by Samah (just the first name, no second name) you know exactly what the story will be all about.

Encounters of Fat Bride is the story of a girl Madhurima Pandey (named after Madhuri Dixit, who the protagonist’s father was besotted with), a twenty-five year old, 5’2” weighing a whopping 93 kilos, and working as a sales executive at ACM Motors. At quarter century, she has already lost a few precious years that the marriage market so eagerly craves and with her weight, her chances of getting any boy are slim (pun intended) and an eligible groom at that, slimmer (more pun intended.)

The nudges of “you are next” that every unmarried girl has to grin and bear much like PMS, starts for Madhurima. And so does the groom hunting by her over enthusiastic parents and maternal grandmother, who by a strange coincidence lives with them. This tech-savvy grandma uploads Madhurima’s profile on the matrimonial site shubhshaadi.com, cunningly posting just the picture of her granddaughter Kumari Madhurima Pandey’s face with details: “Lovely, sweet girl. Fair complexion. Big eyes. Healthy figure, heavy chest, long hair. Respectful, graduate,” with the logic that men lust after women with big breasts and this feature of her granddaughter’s would result in an avalanche of proposals.

This part had the potential to be hilarious and result in fantastic scenes making the readers laugh, but sadly the author nips this in the bud by making her heroine delete her profile and opting for MBA to get respite from the marriage shenanigans, but unfortunately it doesn’t work as most Indian parents are tenacious when it comes to their daughter’s marriage.

Then starts the familiar routine of telling family and friends to look out for prospective matches for Madhurima. This predictable setup is followed by few boy-seeing-ceremonies called the Tea Parade which Samah does not go into any details, thereby losing out on a heavy chunk of humour, which would have brightened up the dull book.

The first boy rejects her and after that follow a slew of rejections with Madhurima’s non-existent self-confidence taking an extremely sharp nosedive into dangerous territory. Finally comes the knight-in-shining-armour Harsh Tripathi, a tech guy, dealing in computer hardware, who meets Madurima with his family, she decides to reject him just to get even with all the guys who had rejected her. But before she can put her rejection plan into action, she is shocked to know that Harsh has agreed for a second meeting in a coffee shop.

One of the most hilarious scenes in the book happens in the coffee shop, Madhurima locks herself in the washroom to repair her lipstick and brush her hair, and when she emerges from the washroom she sees a guy nervously fixing his hair in the mirror outside. The boy is Harsh and they both laugh at the awkward situation and the ice is broken, but what follows is a one-sided conversation with Madhurima carrying the burden of polite conversation on her shoulders and Harsh’s contribution being frequent nods and goofy laughs.

Madhurima and Harsh get engaged and the girl with a low self-esteem is consumed by all kinds of thoughts regarding Harsh. Was he gay, impotent or had a hidden first marriage, that had made him agree to marry her despite her major flaw. These thoughts are compounded by an uncommunicative, unromantic Harsh who treats her like she is his aunt. The story does pick up momentum when she discovers a few secrets about Harsh, but sadly it’s too far along in the story to make much difference.

The book is flawed in several places, there is so much emphasis on finding a groom that her job and MBA are relegated to the background and become indistinct blurs. I would have loved to see her interaction with her colleagues and MBA classmates, what kind of rapport she shared with them, how they treated her. The readers are left clueless about Madhurima’s facial features and body structure, all that we know is that she is overweight. I was eager to see what kind of clothes Madhurima wears to camouflage her bulge, what kind of a struggle does a young overweight girl have in her day to day life. How does she tackle body shaming? Is her life all about abstinence from certain kinds of food, clothes and activities?

Other than a few lame attempts at jogging and dieting, Madhurima’s contribution to getting into shape are non-existent. It would have worked in the book’s favour if Samah had shown pity, disdain, mockery, in the eyes of people, especially the boy’s side, when they looked at Madhurima, that way atleast she would have made the readers root for her heroine. The book had several sensitive issues like body shaming, dowry demands, career over marriage, matrimonial sites, that could have made the story sharper and more issue-based, but sadly all these were sidelined and the one-track treatment of the story and the insipid character left me with no feelings whatsoever for both.

The writing was dull in many places, the scenes that could have enlivened the story were mentioned in passing and by the end of the book I just wanted Madhurima to get married and give me a break from the overdose of self-pity she was indulging in.

Rachna Chhabria is a Bengaluru based children’s author and a freelance writer.