Is Rajat Gupta indeed the ‘unluckiest man in the world’?

Rajaratnam had been under federal investigation for some time and his calls were being wire-tapped. 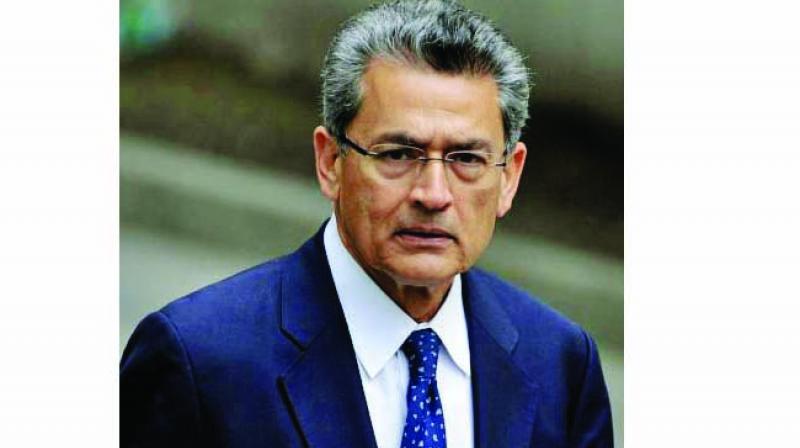 Gupta’s book, Mind Without Fear, has recently hit the stores.

The case of Rajat Gupta, the poster boy of the corporate world in the United States, India and the world in general, is well known. Three times managing director of the tony consulting firm McKinsey, a board member of Goldmann Sachs and Procter & Gamble and the promoter of the Indian School of Business and the Public Health Foundation of India, people everywhere raised a toast to his success with Indians being elated that one of their “own” had achieved such great success in international climes.

Apart from corporate chieftains, presidents and heads of government rushed to consult him and the United Nations even invited him once to address the General Assembly, a signal honour indeed. He was also known for his work on humanitarian and charitable causes and his work in the global fund to fight AIDS, malaria and tuberculosis is well-known.

An initiative of Kofi Annan, then Secretary General of the UN, Mr Gupta was invited to join the board soon after its inception, A public-private partnership, where the “public” consisting of representatives from member-states and in an overwhelming majority, with Gupta being the sole “private” member representing industry, the fund was responsible for the largest disbursement of funds to tackle global disease. That is, where the members could put aside their inter-state differences and agree on something.

Gupta was proud of his work on the Global Fund: “I loved working with the Global Fund and consider it one of the most treasured aspects of my life experience.” His management and consultancy experience stood him in good stead while working with the Fund, enabling him to effect compromises among warring factions, neutralising the “bullying tactics” of the US as the single biggest donor and eventually getting elected its chairman. As an “active” chairman, Gupta was able to collect significant donations to the Fund from the corporate sector including Bill Gates whom he counted as a personal friend. This friendship was to stand him in good stead when he decided to start the Public Health Foundation in India (PHFI). The PHFI has emerged as the most important “think tank”  on health policy in India, mainly because of the appointment of Dr K. Srinath Reddy, the eminent cardiologist as its founder-president.

Gupta considers recruiting Reddy, a “passionate evangelist” for public health in India, as his greatest contribution to the PHFI. Of course, getting $15 million from Bill Gates and another $20 million from Indian corporates also helped in starting off the PHFI.

Apart from intense satisfaction from his work at McKinsey (the firm) and outside of it, both in his pro bono work and as a consultant and paid director, Gupta was happy in his personal life. Married to Anita Mattoo, his sweetheart from his IIT Delhi days, they had four daughters, twin grandchildren and a lovely home at Westport, Connecticut that once belonged to J.C. Penney. Gupta's own net worth was, according to some estimates, between $160-170 million.

Not bad going for a middle-class Bengali of humble origins: his father was a journalist and a freedom fighter, who was jailed by the British, the family moved to Delhi from Kolkata where Gupta was educated at the Modern School and the IIT-Delhi.

Conscious of his responsibilities among four siblings with just a sister older to him, Gupta decided to excel academically. At the campus placement interviews at the IIT, Gupta was selected as a management trainee in the coveted corporate India Tobacco Company (ITC). Turning down this lucrative offer in favour of an MBA at the prestigious Harvard University was a difficult decision. It would involve a paid trip to Kolkata to meet an incredulous chairman A.N. Haksar for no one turned down an offer from the ITC! But Haksar softened when he heard the reason and, being a Harvard alumnus himself, encouraged Gupta, “go to Harvard. It's the chance of a lifetime”.

From Harvard, Gupta got recruited into McKinsey, thanks to an intervention from his Harvard professor and Gupta never looked back after that. With satisfaction on all fronts, Gupta, secure and happy, began to live the good life. His was a “fairy tale” success story, a success worked hard for no doubt, but like all fairy tales, the ending was important. In Gupta’s case, the story's ending had to be grounded in reality and what was the reality?

In the year 2008, corporate America was overwhelmed by a financial crisis that wiped out companies like the Lehman Brothers and Enron Corporation and assets, jobs and reputations were lost. It was almost like a second coming of the stock market crisis of the 1930s. Eventually, President Bush had to sign off on the Troubled Assets Relief Programme (TARP) authorising $700 billion in bailouts.

The crisis led to a public outcry in the media that the authorities needed to find and punish the guilty. Rajaratnam, a billionaire trader of Sri Lankan origin who had started the hugely successful hedge fund Galleon, was charged with securities fraud and insider trading and finally found guilty on nine counts of securities fraud and five counts of conspiracy. Rajaratnam was sentenced in October 2011 to 11 years in prison. At the much-publicised Rajaratnam trial, it was proved that Rajaratnam had access to "inside corporate information" from companies on the basis of which he was able to trade in the market and make millions. Rajaratnam had been under federal investigation for some time and his calls were being wire-tapped. And one of the most frequent callers was Rajat Gupta.

Gupta had participated in a joint investment with Rajaratnam to the tune of $10 million in a joint hedge-cum-equity fund, Voyager. Voyager eventually got hived into hedge and equity with Rajaratnam looking after the former and Gupta the latter. Gupta's numerous calls to Rajaratnam were to secure his investment after learning that Rajaratnam had pulled out his equity share.

But the Securities Exchanges Commission (SEC) believed the calls were “insider tips” on Goldmann Sachs and Procter & Gamble where Gupta called Rajaratnam immediately after the board meetings and Rajaratnam was able to trade with profit. Gupta is indicted on five counts of securities fraud and one count of conspiracy and incredibly, during his trial which attracted worldwide media attention, did not take the stand in his own defence on the advice of his lawyer.

This is the question that has always tormented Gupta and his book, Mind Without Fear, the title quoting Tagore, is an attempt to give his version of the story. It’s a moving book, more like an autobiography, but the trial is central to the book.

In the book, Gupta seems to portray the judge Rakoff as prejudiced from the start, allowing the prosecution objection to Gupta's humanitarian work in the defence's opening remarks to stand. “Your Honor, just to be clear, he won't mention AIDS, malaria or tuberculosis”, and Rakoff replied, “Or the bubonic plague.” The joke was on Gupta. Central to the prosecutor's argument was that Gupta had made a crucial call (wire-tapped) to Rajaratnam 16 seconds after the Goldmann Sachs board meeting where the directors were informed that Warren Buffet was making a $5 billion investment into the company. While this was based on hearsay and no pecuniary gain accrued to Gupta, Rajaratnam made a killing on the market. Eventually, the jury found Gupta guilty on four charges and not guilty on two after a prolonged trial.

At the sentencing, Rakoff acknowledged that he had received voluminous correspondence from well-placed and respected individuals asking for leniency. Believing them was to acknowledge that Gupta was indeed the “unluckiest man in the world”. “Mr Gupta’s personal history and characteristics starkly contrast with the nature and circumstances of his crimes.” Rejecting the plea for a non-custodial sentence, Rakoff sentenced Gupta to two years in prison followed by one year’s supervised release along with cumulative fines both by him and the SEC which totalled $20 million.

In jail, it’s the Bhagvad Gita that provides Gupta solace and spiritual comfort during two spells in solitary confinement for two bizaare misdemeanours. One, bending down to tie an undone shoelace, deemed “not present” by the warden on inspection, and the other, a modified pillow in which he had stuffed some old clothing to make it more comfortable for his back pain. It was “contraband”, a foreign object.

All his appeals to higher courts were turned down and on release, Gupta found that he was an “untouchable” in the corporate world. Even McKinsey removed him from its alumni list. The question still persists. How could Gupta with his business acumen not see through Rajaratnam? Was he terribly unlucky in his choice of a friend or was he a
co-conspirator?