The method in India’s election madness

The Verdict is about the process of understanding the process. It's not just about forecasting but also about the why and how. 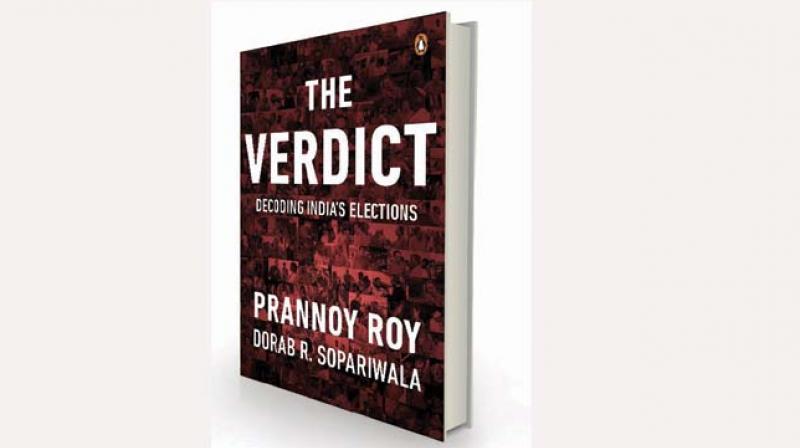 Without a doubt, and as clichéd as it sounds, this is the definitive book on predicting and understanding Indian elections. The art or science of election forecasting may be tricky, but no one can deny that the process is fascinating, especially so in a politically volatile and excitable society like India.

Being a definitive book, it has to be approached more like a textbook or a serious study than your standard bedtime reading. Prannoy Roy and Dorab Sopariwala, both India's best-known TV election forecasters and analysts, have been careful not to make this an anecdote-filled cutesy journey through India's election seasons. Perhaps that is for another book. The Verdict is about the process of understanding the process. It's not just about forecasting but also about the why and how.

It starts with a short history of Indian elections and the Indian political situation, with a view to understanding the mind of the Indian voter. How does anti-incumbency work? Is it effective every time? How different are local, state and general elections?

The authors then go into the importance of women as voters and the difference they make to the outcome of an election. The reader then learns of the shocking discovery — comparing census to electoral list numbers — that 21 million women are missing from electoral rolls. That is as horrific, the book points out, as all the women in Jharkhand or Haryana not being allowed to vote.

Towards the end of the book, the authors look at the problems in the Indian election process, the biggest of which is under-representation. Muslims are badly hit, declining in numbers in legislative assemblies and the worst served in the BJP Lok Sabha landslide of 2014. Women and the youth are also under-represented. And the most badly served as far as voting rights are concerned are migrants. The issue of social media and its negative impact on voting and results is very briefly examined.

On the whole, however, the authors are optimistic about the future of India’s democracy and of election forecasts. They feel that the controversy over Electronic Voting Machines is overstated (not enough on this though), and also that polling is doing well. This is one of the surprises of the book. Anecdotal memory, especially as a journalist, suggests that pollsters very often get it wrong. Data provided in the book emphatically proves otherwise. The general win rate for polls is 75 per cent. That is hugely successful. Even more so, the authors argue, if you remove the results of the 2004 general elections, which everyone got wrong, then the success rate is a whopping 97 per cent.

However, this win rate is just for win-loss. When it comes to the projected number of seats, we do see massive margins of play-safe in predictions. Here, too, it is possible that fear of being wrong leads to under-estimation by pollsters, according to the authors. Also, exit polls are more accurate than opinion polls and the authors feel that the Election Commission was wrong to ban them.

The Verdict gives the reader plenty of tips in how to dabble in election forecasting. The swings, the “bumps”, the bellwether seats are all there. There is advice on how to read an opinion or exit poll and what to look out for. Since the book was released just before voting began for the 2019 general elections, the reader is directed on what to look out for.

The reader should note that this book needs concentration and effort to read. At the same time, one could dip into it and look for aspects of electioneering that interests one.

There are plenty of tables and statistics to keep number-crunchers happy.

I have two tiny gripes. The first is to do with what must be an editor's choice. Most of the book is written in the “first person plural” as it were, as “we”, “our”. Suddenly, there pops up a reference to Dr Roy in the third person. This can be a bit disconcerting. The other is the sort of dismissal of print journalism compared to TV in the coverage of elections and politics in India. As a print journalist, one knows that reach (TV) has not been able to compare to in-depth coverage (print). Ah well, sour grapes, do I hear you say?

For anyone interested in how the election process in India works, not just the forecast process, this is a must-have. With any luck, there are more such books to come.