When Sahil confesses his love to Anya, she turns him down, saying that she can’t reciprocate his feelings. 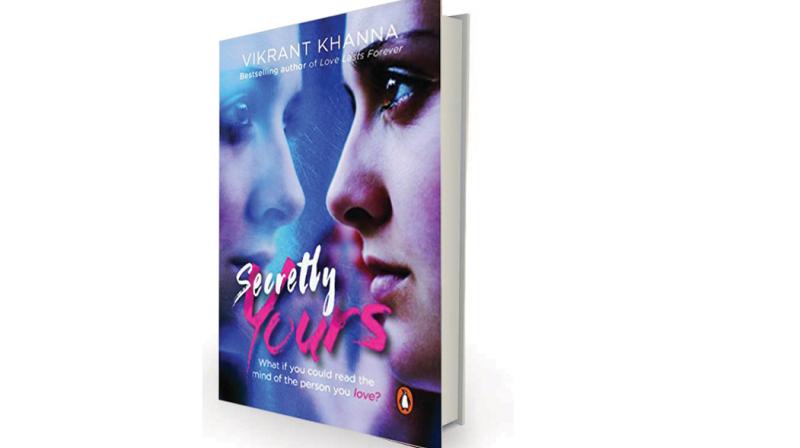 If I were to judge Vikrant Khanna’s novel Secretly Yours by its blurb, I would have dismissed it as another love story. Thank God, that I was taught early in my childhood never to judge a book by its cover. As I grew in age and in my reading, I reversed that advice into “never judge a book by its blurb”. And thank God I followed my own advice, else I would have missed reading this enjoyable book.

The book starts a tad slow, I can even say that it starts with a couple of stereotypes (so that the main character has the readers’ sympathy). Sahil Malik, a 17-year-old boy orphaned very early in life, lives in Shimla with his paternal grandmother, elder brother Ayush and his cousin Shweta. Sahil studies in DAV public school where he has two good friends Nishant and Sammy. He drifts through life aimlessly, his grades are nothing to rave about and is constantly compared to his elder brother who is studying medicine. With a penchant for cutting himself with a blade and alcohol to drown his sorrows, Sahil clings on to his one passion in life: music (guitar). Music is what holds Sahil’s life together, making it bearable. He loves the time he spends in Musica: the music academy. Fortunately for Sahil, music also introduces him to the girl he falls in love with.

He first sees Anya, the mysterious girl, at the two-day annual Shimla festival. The festival is also host to the murder of two school boys who have been savagely killed and castrated in the toilet. Sahil meets Anya again when she enrols in the music academy to learn guitar.

Luckily for Sahil, his music instructor thrusts on him the responsibility of teaching the rudiments of guitar to Anya and her friend Sameer.

Intriguing and pretty, Anya constantly eludes him, her appearance and disappearance are as mysterious as her friends and background.

When Sahil confesses his love to Anya, she turns him down, saying that she can’t reciprocate his feelings.

Before a heartbroken Sahil can come to terms with his unrequited love, he is involved in an accident which leaves him in a coma for a few days.

When he regains consciousness, he realises that he can read minds. Anya’s is the first mind he wants to read. And he discovers a whole lot of secrets locked up within Anya’s mind.

Perhaps, this mind-reading ability of Sahil led to the title of the book. Or maybe, the secrets he discovers inside people’s mind brought forth the title. Its these secrets and the serial murders that make the book a good read.

I just wish Khanna had explained a few things. We never know how Sahil recovers from the cuts he forces upon his arms and legs. We are just told that he wears full-sleeves to avoid revealing them to the world. If a reader can plough through the first few chapters (especially the first chapter, which has a very essay like feel to it, I don’t know if it has been done deliberately because Sahil’s personality initially comes across as dull but it takes on a whole new look when he falls in love and so does the writing in the book) and come to the pages where murders take place, then they are in for a wonderful surprise. From here the book picks up pace and takes hair-pin curves every now and then, hurtling the surprised readers into an unimaginable ride.

I liked the fact that Khanna wasn’t content with pulling off a simple love story. By adding the subplot of the serial murders, he has taken the thriller route. Even then Khanna refused to rest on the potent combination of a love-story and a thriller, he added a whole lot of myths and an urban fantasy into the story. If I say anymore I will be giving away the plot.

Khanna weaves the three elements — love, thriller and fantasy — with a deft hand, doing justice to all three, balancing all three and keeping the readers glued till the last page, and that says a lot for his creativity. Another feather in Khanna’s cap is that he tells a lovestory from the boy’s point of view and does full justice to it. Sahil — the hero of his novel had my sympathy right from the beginning.

Call it the writer’s malaise, I was able to guess the ending of the book. It has been happening with every book I reviewed and read this year. The same thing happened with Khanna’s book.

What lets Secretly Yours down is the proofreading of the book. This is no fault of Khanna’s. There are several typos, not to be mistaken with grammatical errors (typos are errors that happen while the page is being set). Had these been avoided, then Khanna’s book would have been worthy of a five-star rating for books of this genre. Nevertheless, Khanna deserves a whole lot of praise for a great story, delicious plotting and using a whole lot of sub-plots without cluttering up the main storyline.

I also want to add that Khanna’s bio in the beginning of the book tells readers that he is a captain in Merchant Navy. It’s nice that publishers are giving people from diverse fields a chance to tell stories. This augurs well both for the publishing scene in India as well as for the books themselves. When I enjoy a particular book, I usually end up scrambling to read other books by the author. Secretly Yours made me want to read the author’s previous books.