Jagmeet Singh is the first Sikh with a turban to sit as a provincial legislator in Ontario. 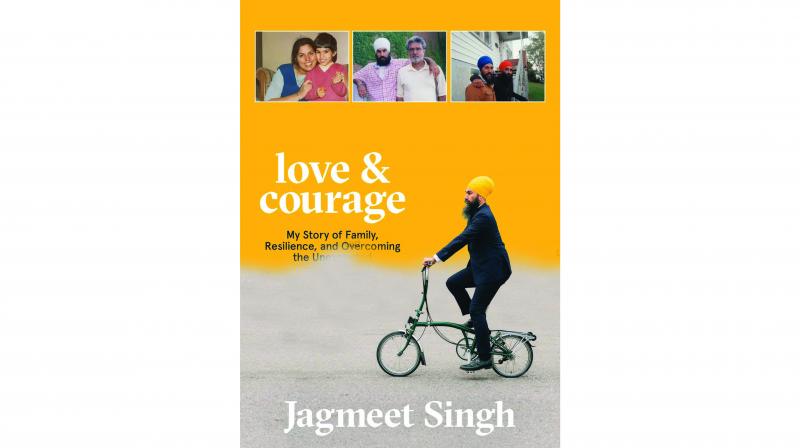 The personal is political” and not surprisingly, the memoir of Jagmeet Singh, elected as the first visible minority face to lead a major federal political party in Canada, was released during an election year. He led Canada’s New Democratic Party (NDF) to win 24 seats in the recently concluded general election and was briefly set to play “kingmaker” to Justin Trudeau’s Liberal Party.

The title of the book, Love and Courage, his signature political catchphrase, emerged as a response to a heckler who typecast people sporting turbans as Muslim and accused them of being terrorists. Whenever he was faced with Islamophobia, Jagmeet Singh never replied, “I’m not a Muslim”, because “hate is wrong, no matter who it is aimed at”. “We must respond to hate with love and courage,” was his message.

Can you separate the personal from the political, especially when you belong to a visible minority community with very visible religious symbols as markers of your identity? Singh, like so many other non-Caucasians, faced stares and taunts like “Dirty”, “Paki”, “diaper-head”, what with society, including the media, broadcasting the image of a terrorist as “brown skin-plus-young male-plus-beard-plus-turban”. “Carding” and “profiling” were more widespread among black and indigenous people, often termed as “routine procedure”. Bouncers at clubs targeted brown-skinned people. Violence against cab drivers was common and the lives of brown people were deemed less valuable.

Jagmeet (which means friend to the world) became an activist in addition to his law practice and participated in anti-poverty and pro-human rights demonstrations. He regularly organised “Know your Rights” workshops and soon went on to form the first Western Sikh student association.

This book is, in fact, his journey from being Jimmy to Jagmeet. It was a life-changing moment for our hero when at the end of his second grade he made two big decisions — to change his name from Jimmy Dhaliwal to Jagmeet Singh and to stop cutting his hair. This memoir is also a window to some basic Sikh theological beliefs and practices in everyday life. With some core values like Ikk-Onkar, God is one, Chardi Kala (to remain in high spirits against all odds), Gurbani as a source of strength, gurdwara as a gateway to enlightenment, seva (service), sacrifice, charity and sarbat-da-bhala, it can be said that Jagmeet Singh has truly embraced the “Sikh way of life”. There are pieces of Sikh history and culture as well in the book and these include references to Maharaja Ranjit Singh, the Akali movement, the British Sikh Army, the Punjabi language as a bond between Jagmeet and his parents, Operation Blue Star and the 1984 riots. Jagmeet writes that Canada is home to him and it is a country that respects human rights and dignity of life.

Initially, Jagmeet was so shy that he couldn't even pick up the phone to order a pizza. Incidentally, he had turned into a vegetarian just to win an argument. Jagmeet also faced sexual abuse from his trainer when he was part of a “special programme” that only the very best were allowed to participate in. It required a lot of courage to come out on this incident that had kept Jagmeet in a shell for a long time.

Jagmeet Singh is the first Sikh with a turban to sit as a provincial legislator in Ontario. Chosen by Toronto Life magazine as one of the five youngest rising stars and featured in the top ten best-dressed people of 2013, Jagmeet Singh’s image as a style icon is also related to his attempts to meet stares and unfriendly looks thrown at him because of wearing the turban. To dress sharp was a part of his socialisation process when his father discovered it as a way “to belong”. “As people of colour, we couldn’t afford not to look good,” he believed. His father said one cannot control the colour of his skin or his country of birth, but one can control what one’s wardrobe says to the world — so Jagmeet made sure his clothing never gave anyone a reason to think he didn’t belong.

The use of simple language in his work immediately builds a bond with Jagmeet’s readers. Jagmeet’s story, intersecting many social and political issues, inspires one in myriad ways. His first meeting with Walid Mansour stays with you and brings a smile to your face. It is difficult not to remember Jugnu, his dog, who proved to be the only link among and source of solace for all family members.

But the real hero of the book turns out to be Jagmeet’s father, and not Jagmeet himself. Born in Punjab and armed with a medical degree, Jagtaran Singh Dhaliwal had landed in Canada to start a new life. Working as a security guard at night and studying for the Medical Council of Canada examination in the library, it was a struggle but failure was no option. From providing an affluent lifestyle to his family to giving them exposure to various activities and hobbies like horse-riding, skiing, snowboarding and golf, he made sure his children got the best upbringing. Alas, his drinking problem proved to be his nemesis. Despite Jagmeet seeming to see his father as part of every single problem and defending his mother and siblings’ harsh treatment of him, your heart bleeds for him and you end up seeing what Jagmeet failed to notice. Though his mother complained to the authorities against him, Jagtaran never received a single complaint from any patient. Always sober at work, he used to help out with psychiatric services and provided treatment to needy. Though he was addicted to alcohol, he was also the family's sole breadwinner and supported the children’s college educations. He got fancy cars and separate apartments for all his children. It breaks your heart when he was not allowed to live in his own apartment.

Ask who you remember the most after reading Love and Courage and it is definitely the father whose story inspires you, pierces your soul and becomes a part of your memory. Though Jagmeet Singh loved and cared for his father, albeit in pieces, how I wish he would have shown more courage to love him — right at the start.