Meghan Daum is crisp, elegant and wryly humorous, and does not dump her traumas on the reader. 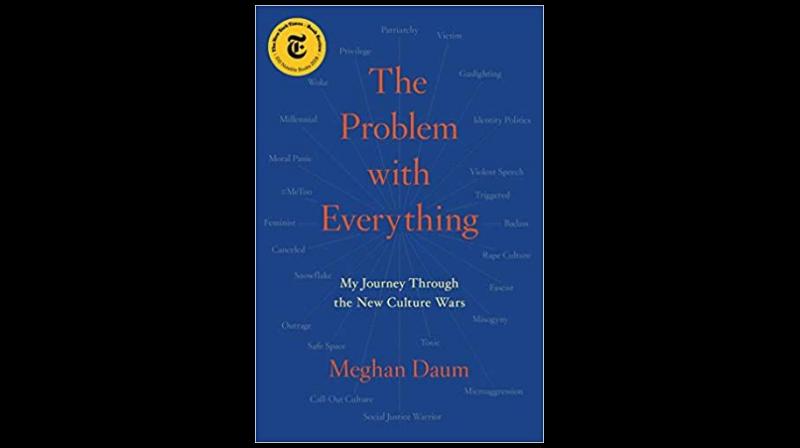 Cover page of 'The Problem with Everything: My Journey through the New Culture Wars'. (Photo By Arrangement)

Consider the following questions. Is military action that defies international law sometimes justified? Should mothers have demanding careers? If economic globalisation is inevitable, should it primarily serve humanity or multinational corporates?

Meghan Daum’s groundbreaking The Problem with Everything was the book that triggered off the Boomer vs Millennial debate overtaking the Western news media not long ago. Republished this year, her thesis had started off as “the problem with feminism” but morphed into a left-on-left criticism of cancel culture. Nuance is her main argument and “toughness” is the quality she champions which she finds lacking in millennials who, she says, have replaced it with a spurious “fairness”.

Since I had myself published an opinion entitled, “It is tact not grit that makes Youngistaan tick”, in the summer of 2008, this is not news to me. To me, the spotlighting of cancel culture in higher education, media, publishing and politics that she has done as a leftist herself is her unique intellectual contribution.

Advertised as the antidote to rape culture, cancel culture is a concerted attack on free speech by left-libertarian cabals and whom Daum designates as the “corporate wokescenti”. It typically occurs through blackballing and the use of social media and leads to the victim’s job loss and denial of opportunity. One of its important effects is the choking off of any serious enquiry into the true state of women’s rights.

Inherently elitist, cancel culture admittedly does not speak to the condition of Afghan women beyond a few words of lip service dispensed only if it must. After all, it is known to favour multiculturalism when it comes to anomalies in personal law. At the same time, through its irrational victim worship and its requirement of having a grievance so as to be counted, cancel culture invisibilises the implicitly feminist success stories of happy role models whose blitheness nevertheless comes at a personal cost (of time, opportunity and relationships) that they have willingly paid.

The fact that I could read her book in practically a single sitting is not only testimony to an ideational congruence with but also to the quality of Daum’s writing. She is crisp, elegant and wryly humorous, and does not dump her traumas on the reader. This restraint I find admirable.

Since the witch-hunt of cancel culture activists is learned to have claimed big names like Jordan Peterson and Suzanne Moore, the Guardian columnist, it is unlikely for Daum to have passed its gaze completely unscathed. My own critique of her work will be from the Indian’s perspective.

Daum contends that professional women are no longer expected to do the major share of domestic chores in the West, so she can legitimately ignore such a request without feeling offended. While I shan’t have been ‘triggered’ by the same suggestion myself, to say that equal division of domestic work is not widespread in Indian homes where both spouses earn an income by working outdoors is an understatement of fact. To inform a speaker that such an ask is not kosher in the face of ineluctable opprobrium takes a degree of radicalism.

That she resorts to memoir and reportage when analysis is expected of Daum is my next quibble. On the bogey of women’s safety, for instance, which she rightly accuses the millennial cancellistas of propagating, she finds it sufficient to quote Camille Paglia from 2016 simply saying that back in the day women took risks, rather than explain that it is not only important to do so but one must also take responsibility for all variety of consequences. Which, does not necessarily mean automatically forgiving the rapist, but lighter sentences, that Germaine Greer called for in 2018 and was promptly cancelled herself.

To a lesser extent, I find it problematic that Daum cites Paglia and Hoff-Sommers to establish her worldview because both departed from classical feminism, Paglia with her work on male-female archetypes that veers too close to stereotypes and Hoff-Sommers with her patriarchy apologism and status-quoism repackaged as equity feminism, and both have now pivoted.

In India, the government grossly underpays ASHA workers who continue to render yeoman’s service to the community (they have single-handedly wrought a decline in child mortality over the years), and families deny women basic agency in exchange for chaperones and ladies’ seats. But society puts women on a pedestal as “goddesses”. With their shrill demands for safe spaces, lights, cameras, panic buttons, GPS and special protections (by men and from men), aren’t young Western women laying the same trap for themselves? In the name of empowerment, are they denigrating themselves? With reports coming in concerning rise in spitting, public urination and honking in these countries as well as of collapsing infrastructure and bridges, it begs the question, have globalisation and contact with Indians corrupted the West?

Though bans and violent threats against books and art make up the headlines in our country, cancel culture in the media, publishing and academia is alive and well, unabashedly taking its cue from Western media trends. Although the fourth wave grievance feminism of the millennials mandates wealth and male protection as conditions for a woman’s safety yet punishes difference of opinion, it is the official feminism, respectively, of the left and the liberal establishments. To the left, I would pose this question, is this not suspiciously similar to the original illiberal sin of the liberals, the cancelling that you, yourselves, had been subject to in the hands of right libertarians before the Soviet Union’s fall?

Coming back to the political compass, I invite the reader to go through the quiz carefully, and examine the design of the questions. Though the tendency is to be extreme in order to signal one’s loyalty, go too far to either end of the left-right and libertarian-authoritarian spectrums (towards the sides of the big square) and one finds oneself in the directly opposite square not just per tenability but also in terms of whose agenda is being benefited. The spectrums then are not linear but circular, and the compass itself is a sphere, above all. How about that?

I leave my reader to cogitate.

The Problem with Everything: My Journey through the New Culture Wars
By Meghan Daum
Gallery Books
pp. 256, Rs 2,173