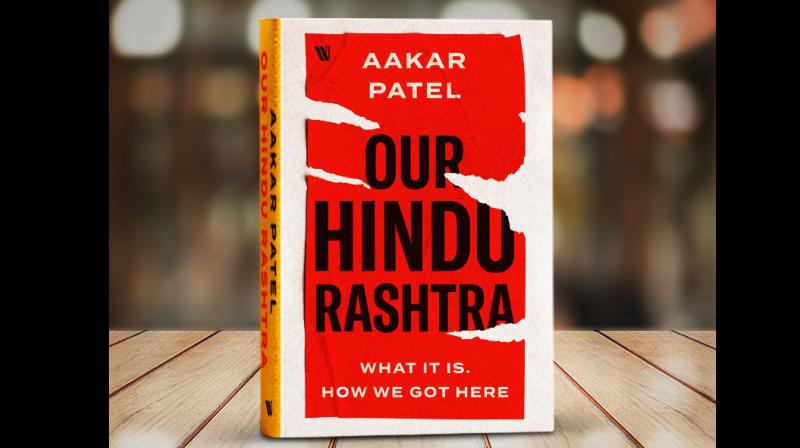 Our Hindu Rashtra: What It Is. How We Got Here By Aakar Patel. (Photo: Facebook @westlandbooks )

This book is a disquieting, even distressing, journey into how India has reached the place we are today. It is called Our Hindu Rashtra but Aakar Patel sets it against the backdrop of India’s neighbourhood. He briefly examines how independence from colonial rule and the foundations of democracy were set in the subcontinent. India stands out because it was not established as a Hindu majoritarian state nor as a theocratic democracy.

But before we congratulate ourselves, Patel reminds us of all the steps we have taken in the last seven decades to undo what our founders and our Constitution had set up for us.

Many people, even those who claim admire it, are unaware of the origins of the Hindu majoritarian movement, how it began, how it insinuated itself into everyday politics and what exactly it stands for. Just for that knowledge itself, this is a worthwhile investment. Who are these “heroes” of Hindutva, the “ideologues” of the RSS, the creators of this thought process of Hindu supremacy and exclusion of all others?

From Vinayak Damodar Savarkar, the inventor of Hindutva to ‘Guru’ Golwalker, the stalwart of the Rashtriya Swayamsewak Sangh, and his Bunch of Thoughts, they are all here. And Patel has read through (a task which requires immense valour and patience) and provided the reader with salient features of their arguments, their “vision” for India and sectarian principles.

Most of which, as Patel ably demonstrates, are hollow and incoherent. He finds no exact declaration of what this large shadowy movements wants and what they stand for. Except that the RSS wants religious minorities to be subdued and persecuted and for Hindus to be supreme. For everything else, from foreign affairs to the economy, all we have is waffle and changing positions.

He says of Savarkar: “His convoluted rules for Hindutva mean that even a Muslim who lights a lamp on Diwali, who shoulders the corpses of Hindus abandoned by relatives, who knows more about the Hindu faith and custom through scholarship than most Hindus, can never be acceptable as an Indian.”

These anti-Muslim expressions by Savarkar define Hindutva and the ethos of the RSS. I quote Patel’s summary of Golwalkar’s Bunch of Thoughts: “India is special in the world because it offered something nobody else could and that was Hindu thought”. Whatever that means.

This is the basis of the RSS, later the Jana Sangh and eventually the BJP. The rest, as Patel discovers, was a reaction to whatever was happening in India in the early years. As he amusingly points out, if the ruling government, usually Congress, promised to do X, the Jana Sangh manifesto would promise to do X even better. This did not do much for them electorally, until LK Advani picked up from the Vishwa Hindu Parishad the idea of building a temple at the site of a mosque in Ayodhya. We have travelled from the 1920s to 1983 and the beginning of the Ram Janmabhoomi movement. As Patel says, “Advani’s success was built on the corpses of Indians and cemented with their blood”.

Through this book, even as he traces the political history of Hindu majoritarianism, Patel reminds us that much of this sectarianism already existed within Indian society. It took immense effort by the framers of the Constitution, as is evident in the Constituent Assembly debates, to keep India on track to become a secular democracy with fundamental rights for all.

The judiciary comes in for particular scrutiny as judgments by our venerable Supreme Courts over the years allowed this underlying feeling of Hindu supremacy to gain prominence. The book also examines the bogus claims of Muslim “appeasement” which is what causes the maximum resentment in the minds of “Hindu” voters and of supporters of the BJP.

We meet current Indian prime minister Narendra Modi, the culmination if you will of almost a century of Hindu supremacist hopes and dreams. Patel looks at ghettoization of Muslims, at methods of persecution like anti-conversion and anti-cow slaughter laws, at the bogey of “love jihad” and even at the protests against the Modi government’s contentious “citizenship” laws.

Having presented with historical evidence of a depressing past and a worse future, for all Indians who want a democratic India that is, Patel then ends on a note of hope. He uses the citizenship protests to look at how young people, activists and citizens came together to make their voices heard.

The book was written before the ongoing farmers’ protests, which have also used civilian anger to push for democracy. Patel is a journalist but although this book sources some of his experiences, Our Hindu Rashtra is more a presentation of our recent history from the perspective of democracy. It is also a warning and a reminder of where we are headed.

Our Hindu Rashtra: What It Is. How We Got Here By Aakar Patel
Published by Westland, Hardcover, 344 pages, ₹799

Tags: our hindu rashtra: what it is. how we got here by aakar patel, book review, rss, bjp, hindutva, hindu supremacist, narendra modi