Left and Right: Inheritors of a blood-soaked history

From the detailed history of political violence, it emerges that there are no innocent players in the district’s politics. 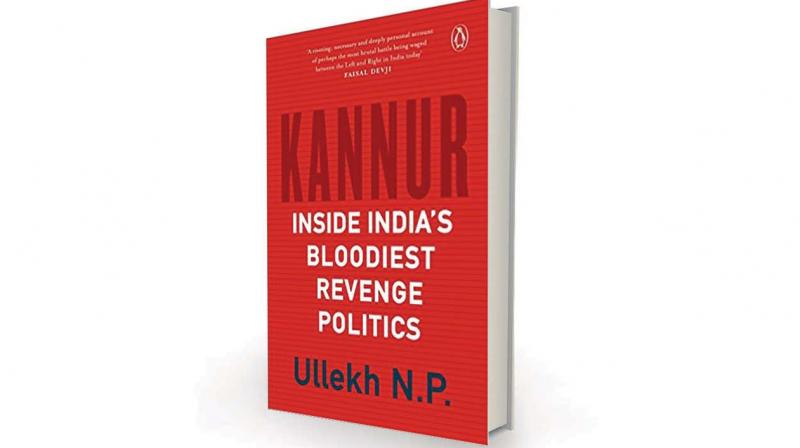 Kerala, currently reeling under nature’s fury, is often referred to as “God’s own country” and rightly so. Apart from being a tourist’s paradise, the state prides itself for having the highest levels of literacy — even by international standards — and impressive social indicators comparable to the welfare states of the Nordic countries.

The state with 14 districts has till date seen 12 chief ministers, three of whom (including the incumbent Pinarayi Vijayan) have hailed from a single district in North Kerala, Kannur. Over the years the district has also thrown up several luminaries who have lit the state’s cultural, social, professional and political landscapes. The same district, tragically, has today gained nationwide notoriety for gory political violence, prompting Penguin Random House to commission a book on the subject. The result is, Kannur: Inside India’s Bloodiest Revenge Politics, authored by journalist Ullekh N.P.

Sustained nationwide Sangh Parivar propaganda in the past few years has painted a picture wherein the Communists are the killers, RSS functionaries and activists the innocent victims, and chief minister Pinarayi Vijayan the butcher-in-chief. In a sly bid to sidetrack its own role in sowing religious hatred, perpetuating violence against non-conformists, triggering riots and abetting a mission to heighten communal hostilities, and instead direct public attention solely on the Communists, the RSS propagandists have of late coined a term Redtrocity (short for red atrocity) to fuel their malign-Communists campaign.

But the statistics marshaled by Ullekh tell an altogether different story. Of the 200 who died in political violence in Kannur district between 1972 and 2017, 78 were from the CPI(M), 68 from the RSS, 36 from the Congress, eight from the Indian Union Muslim League (IUML), two each from the CPI and the radical National Democratic Front (NDF, now the Popular Front of India — PFI), and the rest from other political parties. Ullekh, who himself hails from a prominent CPI(M) family in Kannur tells us there is a euphemism in the area for political revenge killings. It’s called “goal scoring”. If statistics is anything to go by, the scoreboard in Kannur puts the RSS ahead of the CPI(M).

From the detailed history of political violence painstakingly put together by the author, it emerges that there are no innocent players in the district’s politics. To his credit, despite his own Communist background and upbringing, Ullekh does not absolve the CPI(M) from its due share of the blame. In fact, the book traces the political trajectory of particular CPI(M) leaders — as much as their counterparts from other parties — who have contributed to Kannur’s muscular culture. In Kannur’s spiral of political violence, the perpetrators are often indistinguishable from the victims amid the warring political outfits.

The book does note that other parts of Kerala too have not been free from political vendetta and revenge politics. But data shows that in terms of the history, the scale and frequency of violence, Kannur is a case by itself. Why does Kannur’s blood-soaked political history stands apart from the rest of Kerala?

The practitioners of muscular politics across the board are quick to point fingers at their rivals, holding them solely responsible for vitiating the political environment. But academics, historians, religious leaders and police officers have different theories on what lies at the root of the endemic violence that girdles Kannur’s polity.

Exponents of the Kalaripayattu point to the long tradition of this martial art form in Kannur region which remains popular even today and which explains the prevalence of muscular politics in the area. An entire chapter in the book titled, “The Anatomy of a Conflict”, details the fascinating if questionable thesis put forward by Kerala’s retired DGP Alexander Jacob who has made a name for himself as a scholar of religions, myths and legends and has an “encyclopedic knowledge of Kannur and its history over centuries”.

According to Mr Jacob, “people from this region have a different racial composition compared with people from other parts of Kerala”. In short, over the centuries people of Kannur region have had successive infusions of “ferocious, martial blood” to the point that today violence “is innate and almost a part of the DNA of the region”.

How, if such be the case, can one blame the RSS or the CPI(M) or any other party for that matter for today’s killings if all of them are the common inheritors of a blood-soaked history? What hope may one entertain of taming a people who have had “ferocious blood” running through their veins for centuries?

Fortunately, not everyone subscribes to this thesis. Several academics, scholars and historians of the region with their Marxist understanding of history point to the class struggles of the early 20th century.

Veteran Communists such as P. Krishna Pillai and A.K. Gopalan, who later became Communists, started their political career in the Congress camp as Gandhi loyalists. But soon the socialist-minded who wanted to work for the “Congress of the poor” ran into conflict with the de facto “Congress of the rich”. To fight the repression let loose by the Congress landlords and businessmen as also the police, the Communists were left with no choice but to build a militant response. What in recent decades has turned largely into an RSS vs CPI(M) war, started off as clashes between the Congress and the undivided Communist Party of India (CPI).

The last chapter titled, “The Thorny Road Ahead”, suggests several credible measures to bring Kannur’s cyclical violence to a close. The most important measure suggested is the adequate equipping of the woefully inadequate police machinery. Other suggestions include active steps by the top leadership of the CPI(M) and the RSS to slowly replace the muscular leaders with “doves” and promoting women to leadership positions.

If violence in politics is among your concerns, Kannur is recommended reading.