A memorable journey sure to linger for a long time

She writes: “My parents had brought me up as an Indian and instilled the fact that we were Indian first, Indian second and Indian last.” 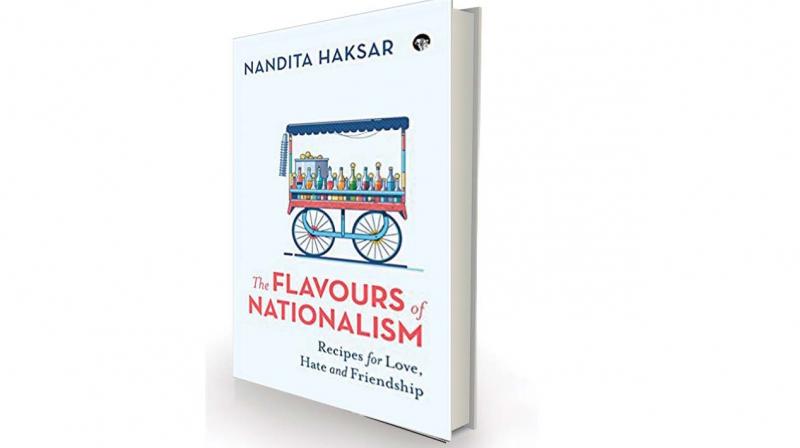 The Flavours Of Nationalism by Nandita Haksar, Speaking Tiger, Rs 350

Nandita Haksar’s The Flavours of Nationalism: Recipes for Love, Hate and Friendship is a bold memoir that deftly touches upon various aspects of our daily lives — from food to politics to nationalism to feminism — and adds a delicious flavour to all.

In her professional avatar as an ardent human-rights lawyer, Haksar has famously represented victims of Army atrocities in the Northeast, Kashmiris framed in terrorism cases, hapless migrant workers and refugees seeking asylum in India. Having closely witnessed the injustices prevailing in our society, she has managed to produce a rich and convincing overview of certain contemporary issues.

Born into a Kashmiri brahmin family, Haksar’s ancestors hailed from the Kashmir Valley  in the beginning of the century, but later settled in the plains. Over the years, they mingled with the local populace and ended up adopting the new culture, rituals and languages of the plain with ease.

She recollects that her family never had any special fondness or memory of Kashmir that they could talk about. But they recognised themselves as Kashmiris without any degree of self-consciousness. Their attachment with Kashmir stayed limited to celebrating Shivratri, the most important festival of Kashmiri Pandits, and relishing delectable Kashmiri cuisines. As a die-hard meat-eating brahmin who has grown up savouring all fleshy delicacies, she considers it sacrilegious to interfere with anyone’s food choices.

Haksar writes of how food occupies a core part of Indian lives, and what could have been a major factor for healthy national integration has sadly ended up as the causal agent for division amongst the people. This kind of reigns as the central theme in the book.

As the daughter of a diplomat father with a career that took him to several countries, her exposure to food and culture from different parts of India and abroad takes readers on quite a memorable journey that is sure to linger for a long time. Haksar fondly remembers her stay at Lagos, Nigeria, when her father was posted there back in 1961. Lagos then was the capital of the newly-independent Nigeria. Her parents, who forever considered food as an important binder of diplomatic ties and long-lasting friendships, had started the Diwali Mela in Lagos. And till date this gets organised for the Indian diaspora every year as their biggest annual celebration.

The author also shares choicest recipes she had carefully preserved, which could open up the door to a new world of food for many interested readers. At the same time, she soundly writes against the food politics in the country that she alleges has become a prime trigger for disharmony in the present time.

A number of other hot issues have been touched upon too. There are forays into feminism, politics, nationalism, socialism, her role and involvement in Naxalite movements, impact of imported goods on local markets, caste and class divisions, the impact of religion in the lives of Indians. She gives a fairly objective and unbiased view on each topic, at times reacting particularly strongly toward issues like beef ban and vegetarianism which, she argues, has crafted a clear demarcation between Muslims and Hindus.

As a feminist, Haksar objects strongly to the inequality and gender bias prevailing in the society, and also points out how a girl child is expected to grow into an expert in housework, while a male child has the right to enjoy finer aspects of life. She gives an example of her own parents, both of whom were excellent cooks. But while her father drew all the recognition for his culinary skills, none found it important to give credit to her mother.

Even in her professional life, she faced situations where her male colleagues expected her to pour tea just because she was the only female member present in the meeting!

The random, almost casual display of favouritism for a male child often met with her staunch protests. Very often she discovered that it’s always another woman who coerced a woman to suppress her desires, and acted as an instrument herself to make the situation graver.

Though a memoir, this book raises some big questions: Are we Indians first and foremost, or are our regional identity and religion the primary identities?

She writes: “My parents had brought me up as an Indian and instilled the fact that we were Indian first, Indian second and Indian last.”

What makes the book a further interesting read is the lucid narration of her personal experiences woven in tales which hits the conscience of readers and compels them to question: Are we on the right path?

Haksar dreams of a society with equal rights, where people from all classes, religions, languages will mingle with each other in a free and unfettered manner; with open arms and be happy in the presence of one another — much like people naturally bond all over the country  around street vendors, enjoying the same food, without caring about any further nuances.

The book ends with a question: In a country where one in nine go to bed hungry, seven thousands of them die of hunger every single day, how important is it to rage a debate over if our ancestors did or did not eat beef? Or to thrash an adivasi to death for stealing rice? Or file a criminal case against a cook for not disclosing her caste?

“Caste system and patriarchy deny the basic premise of democracy: the right to live with dignity, equality and self-respect,” she writes.  And urges readers to choose and take the right side.

Sabari Raychaudhuri is a critic who runs several book clubs