How a corporate slave finds the secret of enlightenment

Anyway, apparently, my divine intervention was operating without any intervention of will or faith (or quality check) from my end. 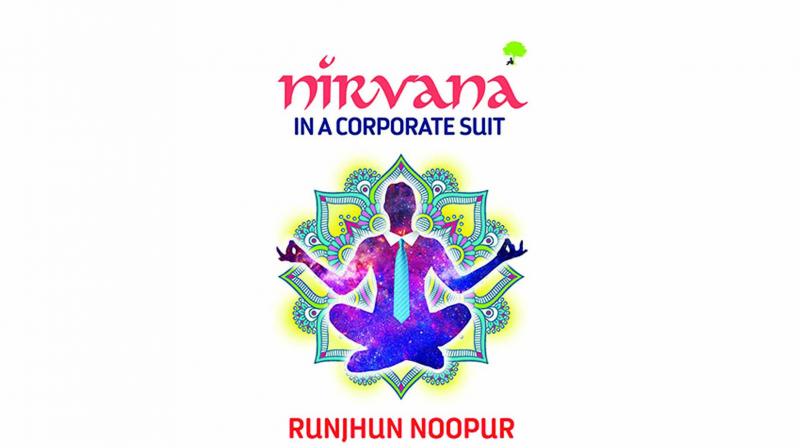 Nirvana in a Corporate Suit charts an average person’s journey for meaning and happiness, with oodles of humour and a strong dose of popular culture. Sample our protagonist’s first brush with his destiny.

I stuck my ear to the dirty wall. The guitar continued playing, louder, now that I was presumably closer to the source.

“Hello!” I tried tentatively, keeping my face close to the wall and voice high enough to be heard on the other side, “Is someone in there?”

The guitar stopped. I held my breath in anticipation.

“Hello, my child!” a deep throaty voice greeted me from within the wall. My breath hitched in my throat. Until this point in time, I had not actively considered the possibility of the other side of the wall being a real possibility. I was perhaps hoping for it to be a fluke, some weird play of the acoustics that was transmitting the sound from elsewhere in the building.

I took a deep breath and cleared my throat.

“Um, Hello…Sir”, I said in wobbly voice, not really sure of the etiquettes one needed to follow with a faceless voice behind grimy mystery wall, “who are you? And what are you doing in there?”

“Ha!” a throaty laugh sounded from within, “that is not the point here my child. The point is who are you? And what are you doing in here?”

Baffled, I looked around. What I was doing in a mucky toilet was obvious to me until the moment the weird guitar sound interrupted my life.

Now, despite the obvious obviousness of the situation, I was suddenly not so sure.

“I... erm... taking care of business, I guess?” I said, more uncertainly than I would have ever considered being on the subject.

“Do not”, the mystery voice boomed, “cheapen the greatest moment of your life, lad. This may be the divine intervention that you have been always waiting for”

To be honest, I wasn’t waiting for any divine intervention. Five years as a functioning adult, and a corporate slave no less, are bound to suck out all your faith in magic and divine interventions. Cynicism is an essential side-effect of adulting. Pity, nobody forewarns us about that.

If this were a Chetan Bhagat world, the intervention would come as a divine phone call. Whoever thought that was strange should check with me. At least, a phone call isn’t smelly. My divine was apparently dwelling behind an abandoned toilet’s wall. I don’t even want to know what that possibly says about me.

Anyway, apparently, my divine intervention was operating without any intervention of will or faith (or quality check) from my end. Which was as tragic as it was hilarious. Tragic because even the divine was not interested in my opinion. And hilarious because this was probably a prank, and I was still allowing myself to be played.

Only for a little while, I told myself. Just a little longer.

I cleared my throat and tried to clear my head.

I did, actually. Just like the 7 billion other inhabitants of this planet. But it was nice of someone to notice.

“Don’t you worry, son. Help is at hand. The forces are with you. Your life is about to change. Seek your path and you shall find your way to the ultimate happiness.”

I was thoroughly confused. I wanted to believe that this was just a joke, an ugly prank, and yet there was something tugging at my consciousness, something that felt like a visceral weight that wanted me to believe that whatever was happening in here was real.

I was trying to be funny when I said my divine help was behind the wall of a stinky, abandoned toilet. But I was having a dawning realization that there is an actual possibility that it may be true. And I really did not know whether I was supposed to be disturbed or thrilled.

“Erm, Sir”, I decided to switch to direct questions, “what am I supposed to do to, erm, seek my path?”

“Look within yourself. The answers lie within”, the voice philosophized.

Obviously, that was not the answer I was looking for. I tried again.

“Come and find me. I will lead you to your destiny”

That was tricky. I imagined running into the wall, and breaking more than a dozen bones. Sure, I wanted happiness. But, not that much.

“Find you?” I sought clarification, “in there?”

I could hear the voice rolling its eyes. Seriously, hear.

“Look within, my child. Look within yourself. The answers are all there”, came an almost exasperated reply.

Not helping. “Could you be more specific?”

The voice cleared its throat and spoke, this time sounding way less throaty and much more normal, “Fly down to Dehradun.  Take a bus or a cab to Gangotri. Get down at the bus-stop. There is only one bus-stop there. Stand at the stop and look around. You will see a red coloured, round dome, a couple of meters away. Walk down there. I will be waiting for you.”

Extracted with permission from the publishers, Treeshade Books