A memoir that mind maps a creative genius

But poets generally tend to have their own unique and unpredictable style, one that is both charming and disarming. 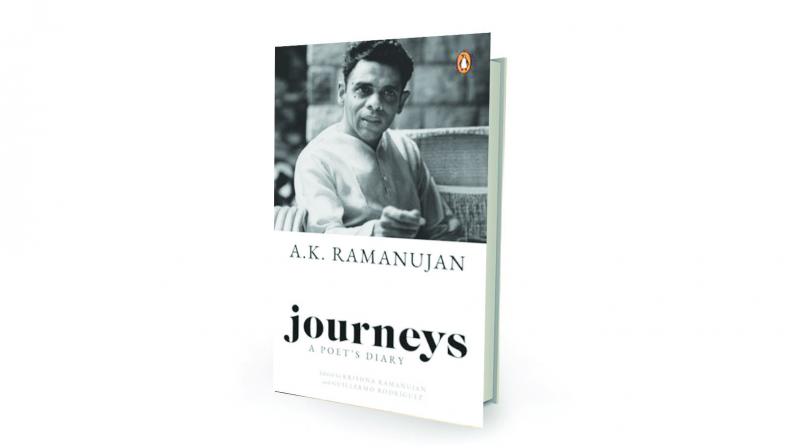 What writers and artists choose or not choose to leave behind reveal a lot about their own psyche, inner workings of their creative space, and their personal life. Some keep detailed journals; others record them ingeniously, embedding them within their own poetry or fiction; yet others choose to convey their narratives through a safer non-fiction route. But poets generally tend to have their own unique and unpredictable style, one that is both charming and disarming.

A.K. Ramanujan’s Journeys: A Poet’s Diary is much more than just that. It is an engagingly written memoir that is full of candour and honesty. It is equally a scrapbook, notepad, journal, photo album — and most importantly, the book contains facsimiles and drafts of many of his poems and “dreams”. This is a meticulously put-together omnibus of over 350 pages — edited carefully by the poet’s son (a science writer), Krishna Ramanujan, and Guillermo Rodriguez (founding director of the pioneering cultural centre in Spain ‘Casa de la India’, and the author of When Mirrors are Windows: A View of A.K. Ramanujan’s Poetics (2018).

In a rather matter-of-fact way, Ramanujan wrote, “I have been writing a journal for some time, chiefly notes to myself, with no pretensions or style or scholarship, but as explorations, passages from one thought or feeling to another. I needed these notes to clear my seeing, settle my roving thoughts, curiously, restlessly, without regard to any discipline (in both senses of the word). I needed them even to form my thoughts, and to see what I was looking at, to listen to what I was hearing. I am publishing them now, making them public, so that the private may find a place in a larger discussion, just as the larger discussions entered my private journals.”

This wonderfully insightful extract above — a journal entry dated October 26, 1976 — acts as an epigraph to the book, was originally published in Guillermo Rodriguez’s book. It reveals a lot about the intentionality of the poet — one that appears beautifully bipolar, one that is at once humble and extroverted. I say this because the poet himself says that wanted to just record his private thoughts for himself at the first instance — but the fact that he continued to do so over his entire writing career with judicious regularity “for a larger discussion” must also allude to the fact that he wanted his writings and legacy to be preserved for posterity. I for one am grateful that he actually recorded his own history thereby opening up so many windows and vistas to his creative work, thus making his actual poems, translations and scholarly essays more lucid and anchored in time and space.

Consider the short poem, “What He Said”, dealing with various and varied familial inter-relationships: What was my mother / to yours? What kin was my father / to your father? / How did you and I / meet ever? // Yet our hearts, / like the red earth and pouring rain, / are mingled beyond parting.

We see here, the kind of intense interiority that became one of the many hallmarks of this poet. The diction is sharp, clear and uncluttered — the lines, short and unsentimental. There is both a grounded precision and a sense of evanescence in this poem, as is the case in many of his other works too.

Ramanujan (1929-1993) is widely known as one of the finest Indian poets, translators, folklorists, essayists and scholars of the twentieth century. His translations of ancient Tamil and medieval Kannada poetry, as well as of U R Anantha Murthy’s novel, Samskara, are considered classics in Indian literature. He is considered to be a pioneering poet, producing during his lifetime four poetry collections in English — The Striders (1966), Relations (1971), Selected Poems (1976), Second Sight (1986) — and three in Kannada.

His academic research spanned incredibly across five languages — English, Kannada, Tamil, Telugu and Sanskrit. He published works “on both classical and modern variants of this literature and argued strongly for giving local, non-standard dialects their due. Though he wrote widely and in a number of genres, Ramanujan’s poems are remembered as enigmatic works of startling originality, sophistication and moving artistry.”

Ramanujan was posthumously awarded the Sahitya Akademi Award in 1999 for his collection, Selected Poems. A massively concerted effort by his family, friends and scholars after his premature demise have ensured that all his work have been archived and preserved as the AKR Papers in the Special Collections Research Centre at University of Chicago’s Joseph Regenstein Library.

One of the big delights for me, in additional to all the subconscious creative interweavings of this genius, are the photographs and facsimiles of the poet spread all over the books. We see him as a young man in 1957 leaning against a South Indian balustrade, with his wife Molly Daniels in Chicago in 1962, in a long hair avatar in Arizona in 1972, with U.R. Anatha Murthy in Minnesota in 1976, at his brother’s swish apartment in Pennsylvania in 1981, and more. There are also doodles, sketches and pages from his hand-written manuscripts.

Journeys: A Poet’s Diary is a substantial book, a peek into Ramanujan’s personal creative world of drafts, documents and “dreams”. Anyone who is interested in modern Indian literature — both academically and as a lay intelligent reader — this is an urgent and essential book.

Sudeep Sen is an award-winning poet, translator, editor and photographer; whose most recent book is Kaifi Azmi: Poems|Nazms