‘Really easy for me to write my stories’

My new book has three short stories and I had pretty good plans about the stories. 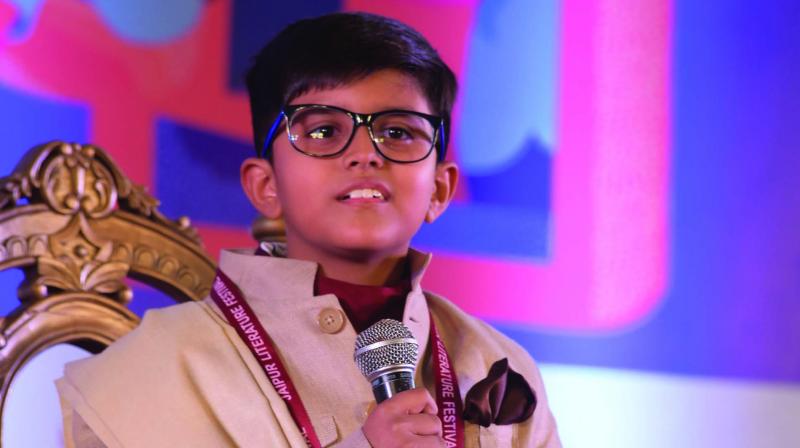 Nine-year-old Anay Saxena is a very smart boy. Every day, he completes his homework between 4 and 4.30 pm. He is also the author of two books — Time Adventures and What a Mysterious World We Live In. Level-headed and with a sneaking sense of humour, the youngest ever writer at Jaipur Literature Festival stole the show with his candid responses and his ability to remain unfazed under the spotlight. Even after a long day at work, he spent some time answering Sucheta Dasgupta’s questions.

When did you first start writing?

I first started writing when I was seven. At that time, I didn’t want to touch a book. But then I read a comic book that got me more interested than any other book, and I asked my brother to get more of them. Dav Pilkey was the first author I ever read.

What inspires you to write?

I like adventure and humour, and I am inspired by real-life incidents. My new book has three short stories and I had pretty good plans about the stories. I thought they will be really easy for me to write. In fact, two of the stories in my new book are real. The third one I had to think up all on my own. The first story is about a monster called Chapatilopolus who is literally a chapati and he ends up eating children. I named him Chapatilopolus because for four years, I have been having chapatis in my lunchbox in school, and it became a joke in my school.

And the second story?

It is called A Spark in One Eye. One day, my father was driving us home at night. It was 1 am and we had just come back from the movies. And then I see an object in the sky which looked like it was an asteroid and it was going to crash into us — boom! So I asked my mother what it was and she said it was just a bunch of clouds, and I was so disappointed that I decided to write a story. In my story, I made the clouds into a capsule with an angel inside it.

Your first book is called Time Adventures and it is 300 pages long. Why do you like time machines?

It is actually really fascinating — the option to go back and forth in time. I have always wanted to go to Europe in the medieval times. But a part of me also wants to visit the future and find out what happens there — has there been a disaster or is it simply futuristic, with people going about their normal lives? Have robots taken over?

When did you learn about time machines?

It was when I was seven years old. I actually read about them — they are included in the Captain Underpants series (by Dav Pilkey).

If you are given a choice, would you like to explore the past or the future?

What is your favourite subject in school?

What are your hobbies?

Drawing and dancing. I draw the illustrations of my stories. Kuldeep sir (Kuldeep Dhab, the illustrator) then redraws them. I have learnt a lot from Kuldeep sir. I also like anchoring shows in school. And I like to listen to songs.

What songs do you listen to?

K’Naan’s Wavin’ Flag. It was the World Cup anthem. I also like playing football even though I am not very good at it.

What is your favourite dish?

What do you want to be when you grow up?

These are tough decisions. I thought I wanted to be a scientist. But now I will probably be a writer.