In the Introduction, the author-compilers say Nehru’s vaulting vision was in practice tempered by the 'more mundane world of politics' 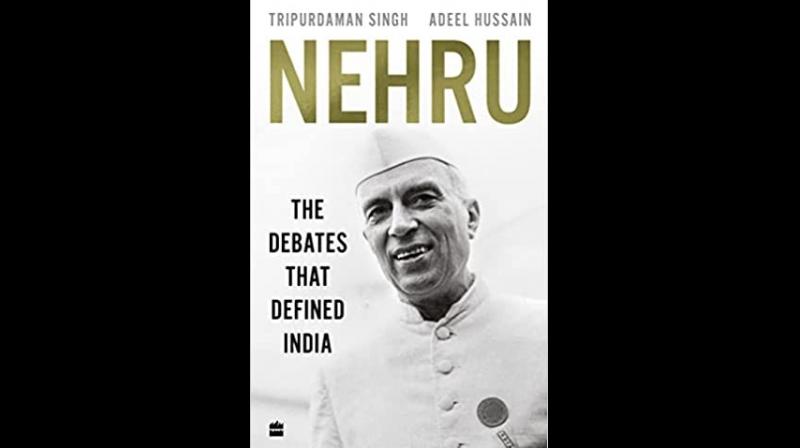 This is a most apposite offering to the nation in the 75th year of its Independence. The “debates” that Jawaharlal Nehru had with Muhammad Iqbal, Mohammad Ali Jinnah and Syama Prasad Mookerjee defined the contours of Independent India; his debate with his deputy PM, Sardar Patel, over our China policy set the parameters of the continuing denigration of his foreign policy.

Partisans (including reputed historians) tend to cherry-pick from these documents to reinforce the perspectives that they present; whereas Tripurdaman Singh and Adeel Hussain present the totality of the argument on both sides. But perhaps the most telling arguments are made by the authors themselves in their invaluable Introduction to the book and the preface they have provided to contextualise each of the four debates.

In the Introduction, the author-compilers say Nehru’s vaulting vision was in practice tempered by the “more mundane world of politics” where “contemporaries had to be disarmed, opponents confronted and outmanoeuvred, compromises struck, choices made, events responded to”, thus rendering some of Nehru’s arguments as debates with himself, between his soul and his mind, between the ideal and the practical. I regret though that Singh/Hussain have added “Nehru’s own grip on power enhanced” for that does not take into consideration the numerous times he offered to go. Nehru was not fighting for personal power but the power to shape India according to the vision he and his mentor, Mahatma Gandhi, had of the scaffolding of a composite India taking its place with a new morality of the world order on offer: an end to the “Quest for Dominance”, as his grandson, Rajiv Gandhi, put it.

With the poet-philosopher, Muhammad Iqbal, who famously described Nehru as a “patriot” and dismissed Jinnah as a “politician”, Nehru shared a “refined taste for Indian and Western philosophy and literature”, “gifted orators” both, ardent socialists both. Their debate revolved around religion and nation-building, a debate that continues to haunt our shared subcontinent decades after the two protagonists have ceased to be among us. While Iqbal “made it clear that the policy of non-interference in religion is the only policy that can be adopted by the rulers of India”, the foundational principle he espoused was of “Islamic solidarity”. To this, Nehru’s response was to point to fissures in the

wider Muslim world to argue that “nationalism and the solidarity of Islam do not fit in side by side. Each weakens the other”. He added in a later fusillade against the champions of religious orthodoxy of every persuasion, including of course Iqbal, that he was “astonished” that they “ignore” the problems of the wretchedly deprived to “talk of vague metaphysical ideas and the good of the soul, shirk(ing) the problems of today in futile debate about yesterday”. Nehru continued that it further astonished him to find Iqbal advocating “a social structure which may have suited a past age but is a hopeless anachronism today”. Iqbal hit back: Nehru, he alleged, “inwardly resent(ed) the prospects of Muslim political and religious solidarity, particularly in India… I fear the articles reveal practically no acquaintance with Islam or its religious history”. And, so the argument continued, with neither losing an iota of his respect, indeed, affection for the other. I would have preferred to see this debate with Iqbal contextualised by Nehru’s arguments on the same points with Mookerjee, who headed the Hindu Mahasabha. But Singh/Hussian have preferred to cite Mookerjee’s objections to the First Amendment (that, ironically, is now being grossly misused by the very BJP that Mookerjee founded!)

With Jinnah it was different, a no-holds barred political wrestling match. In the letters published here dating back to 1938, Nehru kept insisting that he was not prepared to discuss matters with Jinnah until Jinnah first set out the points of difference that he had with the Congress. Eventually, it was not Jinnah but Nehru who, based on material sent him by Jinnah, set out the 14 points to be reconciled, with the first being the League’s Fourteen Points. Nehru in 1938 was speaking from a position of strength, after the Congress trumped all others in the elections of 1937 and the Muslim League secured under five per cent of the Muslim vote in separate electorates. While Nehru stressed that without Independence in hand, it was futile to talk of constitutional protections which neither could do anything about at this pre-Independence stage, Jinnah refused to prioritise the struggle for Independence over safeguards for his minority. The proposed Nehru-Jinnah discussions never took place. By the time Independence became a contingency post-War Britain herself was pressing for, Jinnah had so rallied the Muslim vote (in highly restricted suffrage) that the positions of strength were reversed. I think Singh/Hussain would have served their purpose better if the speeches and writings of Jinnah and Nehru in 1945-48 had been retrieved as their argument in 1938 had become passe and déjà vu on the eve of Partition. Also, since Jinnah lived for 13 months in separated and independent Pakistan this reporting of their “debate” would have been enriched by including, in their own words, their post-Partition positions, contrasting, say, Nehru’s January 1948 address to AMU with Jinnah’s speech in the same month on the role of the sharia in Pakistan’s constitution.

The major shortcoming in the book is that while this is, perhaps, the first time the general reader has been given access to Nehru’s Note for Cabinet on his China policy on November 18, 1950, effectively his rebuttal of the Sardar’s letter of November 7, 1950, the authors have joined the chorus of denunciation without answering the issues Nehru raised: what, in practical terms, could we have done differently? Sent our army into Tibet or captured the Chumbi Valley when Gen.

Cariappa had said, “Nothing doing”? Imposed on China our interpretation of our northern frontiers? Militarily allied with the West in their crusade against communism just as India took the lead in breaking the West’s centuries-old hegemony? Fought a war with China in 1950 just as it was resisting, with telling effect, the might of the West in Korea? Could we have based ourselves in 1950 on war mongering when even in 1962 the communist Chinese unilaterally withdrew to where they had been before the outbreak of hostilities, not even remaining in Tawang? And the key question: why did the deutero-Nehru of post-1959 betray the proto-Nehru of 1949-59?