A performance metric to fight smog

Dealing with pollution requires an empowered institution whose performance is tied solely to controlling pollution. 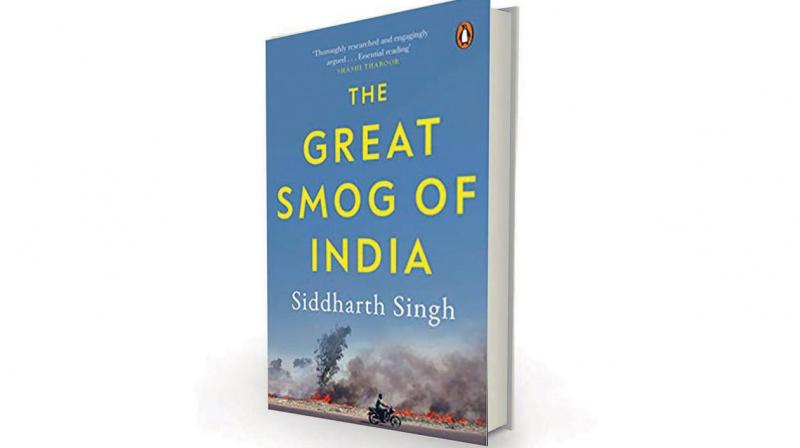 The Great Smog of India is in the genre of everything-the-intelligent-person should know about air pollution in India. It’s attractively written with an easy, breezy style. It instantly sets the reader at ease that she is not about to be inundated with complicated scientific models and graphs about climate change. The author purposefully dumbs down the narrative. The first three chapters like a novel with a bottom-up view of what air pollution means to the ordinary Indian and the havoc it can cause in everyday lives.

The author is wise in limiting his objectives to build his narrative by aggregating existing literature. There is a great deal of overseas work on the source and health impacts of air pollution but relatively little about India. We learn for instance that a million people — around 10 per cent of total deaths — die every year prematurely due to air pollution.

Smog is a North Indian problem caused by the mighty Himalayas which block the dust and soot, carried by strong winds from as far away as West Asia, from transgressing into Tibet and thence China. This cloud of death hangs about the northern plains just below the Himalayan range.

Some of this pollution is due to the burning of rice stubble in November to clear the fields for the winter wheat crop. Just `240 billion could virtually end pollution on this account by subsidising the purchase of farm equipment in Punjab, Haryana and Uttar Pradesh which can cut the stubble, plant the wheat crop and grind the paddy straw into the soil as desirable, protective mulch for the wheat seeds.

This would not however end air pollution in the Gangetic plain. There are other point sources of emission like construction, industry and transport. But it would cut the peak loads which push air quality into the hazardous range during winter. The wonder is that this paltry sum is considered unaffordable as a public outlay. Spread across the affected population of at least 400 million citizens it amounts to just `600 per head — less than the cost of a tandoori chicken meal for two in a Punjab roadside dhaba.

The author points to the dire need for collective action by citizens to press government into doing more to avoid people from falling sick — often terminally with lung cancer; becoming prone to diabetes or deficient in Vitamin D because the healing rays of the sun are often shaded out by soot particles from burning biomass or poorly maintained coal-fired power plants — many of which are owned by the public sector. He emphasises that the success and affordability of making better healthcare accessible to all — on which Prime Minister Narendra Modi has laid great stress — depends on ensuring that less people fall ill in the first place.

The book is an engaging, albeit rambling forest walk, with the author happily heading off into side trails, ranging from energy efficiency in the manufacturing sector to the economic history of agricultural production in North India; coal mining practices and the structure of the transportation market. To the impatient reader these come as distractions from the main story. Such readers are advised to proceed directly to the last chapter. This is a lucidly written account of why India is so polluted.

Read this in conjunction with Chapter 2 which is intriguingly titled, “Love in the Time of Air Pollution”. But the title is just a hook to get the reader down to some serious reading about the sources of air pollution and the health impacts thereof.

The short point is there is contradictory evidence about the load of pollutants imposed from different sources. But simultaneous action is key on all the four main sources — power generation from big coal plants and distributed diesel generators used by the rich and by industry to fill the gaps in electricity supply; private vehicles particularly diesel cars, trucks and buses; coal-fired industries and the burning of biomass. The costs associated with cleaning up our coal, biomass and oil economies is miniscule when compared with the likely health impacts of further neglect.

The political economy issue with enhancing the supply of quality public goods (like clean air) is that they are not as effective for getting votes as reducing the cost of private goods (food, fuel and fertiliser) for getting votes — the final metric in a democracy of how and where capital is allocated.

As elections near, all political parties race to appease poor Indians who are the largest voter group. Air pollution, the author reminds us, affects the poor the most. This “silent killer” is very much like inflation. This government has the satisfaction that inflation has reduced during its term and continues to be low. Much of this is because there is an empowered institution — the Reserve Bank of India which has a performance metric, since 2015, to keep inflation low.

Dealing with pollution requires a similarly empowered institution whose performance is tied solely to controlling pollution. The existing institutional architecture is weak and relies heavily on direct intervention by the Supreme Court to achieve this objective. Clearly this is suboptimal.

Managing air and water pollution is an executive responsibility. India is a soft state. Unlike China, top-down directives are unlikely to work. The way out is to make adequate capital allocations such that polluters — many of whom are public sector companies, like the oil companies, which have yet to roll out Bharat VI standard fuel — make the necessary capital investments and control end-of-pipe pollution emissions.

Investment incentives for clean coal and efficient industrial equipment aligned with the excellent work already done by the Bureau of Energy Efficiency, needs sustained support. Similarly, nimble, public sector incubators and “green” equipment supply aggregators, like the Energy Efficiency Services Limited (EESL) should be networked into a pan-India “green” manufacturing community, which leads the way to uncover the piles of “gold” hidden under the pervasive soot.