A classic example of realist eco-fiction, it effortlessly straddles the domains of geography, sociology, cultural history and anthropology 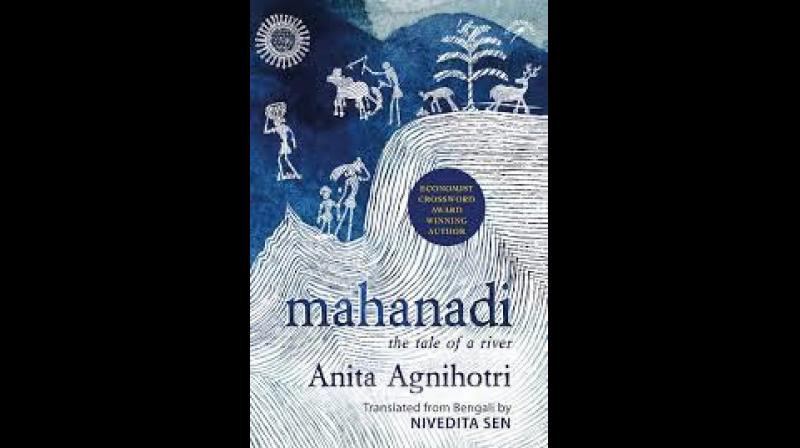 Coverpage of 'Mahanadi' By Anita Agnihotri.

Did you hear the story of the crocodile who loved a girl and the one on how Indra took to task his clouds and made it rain in a Kondh village, inspired by the old man’s lesson? Why do Shitulia girls avoid wearing the Subarnapur ikat sari? What is the Jhantanua festival and what are the dimensions of the Buddha of Boudh town that is said to rival those seen at Lalitagiri and Ratnagiri? Where do you meet Keot boatwomen? What is the connection between the Puri Jagannatha temple and Kathajodi, a Mahanadi distributory? And though this is somewhat harrowing, how do Maniabandh’s Rangani weavers commit suicide?

The answers to these, and more questions, are gems strung on the necklace that is Mahanadi, the river as well as the name of Anita Agnihotri’s 2015 work, now ably translated by Prof. Nivedita Sen into the Queen’s language. A classic example of realist eco-fiction, it effortlessly straddles the domains of geography, sociology, cultural history and anthropology.

Agnihotri is a household name for the reader of literature in Bengali. Her Mahuldihar Din (The Days at Mahuldiha, 1996), Jaara Bhalobesechhilo (The Ones that Loved, 1998), Aynay Manush Nai (No Man in the Mirror, 2013), and, more recently, Kaste (The Sickle, 2019), are all well-known for their storytelling as well as anti-establishment enquiry. In that respect, this work is no exception wherein she examines Nehru’s urging those dispossessed by the Hirakud dam to accept, in the larger interest of the nation, their destiny. From the Pocso landgrab to Vedanta’s casting of the evil eye on Niyamgiri, none of the gross outrages of neoliberal capitalism have escaped her critical notice.

Yet those looking for emotional sustenance from reading will not be disappointed. Agnihotri’s eye for detail and empathy make every one of her characters come alive. And they are varied and lively, sporting every shade of gray, from sociologist Smita and engineer Debabrata, through Ranga, the unscrupulous newspaper columnist, to field officer Arup, Dhanujatra actor Shambhu Mahakud, Tularam Dhuru, the Gond village medic, Subal, the indigent poet, Ramesh Meher, the trader lacking moral principles, Jhanjha, the lucky orphan born during Cyclone Phailin, Karnakumar, the weaver struggling to make a living, and Neelkantha, the lover of another man’s wife who gets his comeuppance, as well as Banasri, the girl who has given her heart to the iconic Netaji who lived generations before her in Cuttack city and who continues to live in that state of reverie. The river is the signal factor in the setting in which all of their lives play out and take on important twists and turns. When humans fail each other, it provides them with diversion, perspective and solace.

The research that has gone into the making of the book is quite apparent. “I went to the source of Mahanadi in Chhattisgarh because I felt until I see the river emerge, my idea of it wouldn’t be complete. Then I went to the river mouth in Jagatsinghpur,” Agnihotri has revealed in reply to a question by Niyogi Books director Trisha De Niyogi. A Day in the Life of Mangal Taram will be her next book.

How many stories can a river give birth to, and sustain and nourish? This is the question the reader will be left with after finishing Mahanadi. Grab your own copy on World Rivers Day.