Magically unreal with a touch of absurd

Magic realism is a difficult genre to pull off but Paralkar has managed to do so with aplomb. 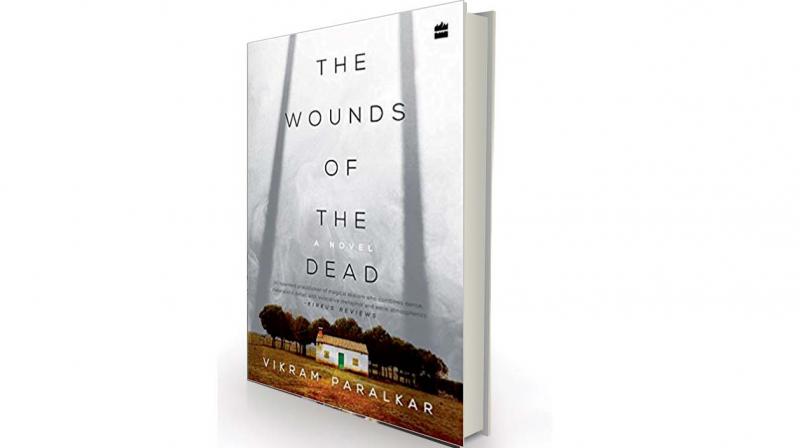 The Wounds of the Dead by Vikram Paralkar, Fourth Estate, Rs 324

When I saw the cover of The Wounds of the Dead by Vikram Paralkar — a small house, looking lost and lonely, in the middle of nowhere, surrounded by a copse of trees — I felt a strong sense of bleakness. But when I read the blurb, I felt intrigued because magic realism is my latest favourite genre and The Wounds of the Dead fits in perfectly there. I’m sure the title would have given you a clue about who the protagonist is. And if your guess is that the person is a doctor/surgeon, you are right.

The protagonist is an old surgeon, disillusioned with life. He was chucked out of his cushy job in a posh city hospital due to the machinations of a diabolical colleague who framed him in a case of malpractice and bribery. He has no option but to work in a dilapidated, rural clinic with a pharmacist who doubles up as his nurse and attends to the villagers.

One of the first patients we meet is a farmer whose forearm has been slit with a sickle. A cockroach disturbs the surgeon, who in anger stamps on it, snuffing out its life, thereby inviting a fumigation of his clinic, a night before he has to administer polio vaccine to children. It has been three dull years since the surgeon, who lives in a tiny quarter nearby, has arrived at this clinic.

The next day, the surgeon and his pharmacist, battling eye-watering fumes of formaldehyde, await the arrival of the polio vaccine which is late by several hours. Finally, a pompous official in a faded safari jacket reaches the small hillock on top of which the clinic is situated, carrying the vaccine. The surgeon and the official have a war of words, each threatening the other. It is during this verbal duel that we get to know the pathetic condition of the clinic.

After the polio vaccination gets over and all the women and children leave, it is late evening. While the surgeon’s head is buried in his ledger making entries, three visitors — a man, his full-term pregnant wife and their eight-year-old son — enter his clinic with a rather strange request. They tell the surgeon that they are seriously injured and need surgery. When the surgeon inspects them, he is shocked because though their wounds are deep, no blood is gushing out of those. The man tells the surgeon that they were attacked by four men on their  way to home.

When the surgeon asks them how did they stop their bleeding?, the man answers, “We don’t know.” The surgeon’s next question is, “Then how did you survive?” The teacher replies, “We didn’t.” This reply sent chills down my spine.

The man, a teacher, tells the surgeon that an official in the afterlife, taking pity on them, granted them life with the stipulation that if they get their surgeries done during the course of the night then at sunrise they would get their life back. As the night wears on, the surgeon operates upon them.

The entire novel spans out during the course of this one, long night. As the surgeon conducts these risky surgeries, we become privy to the secrets the teacher harbours, the danger to which he has exposed the surgeon, the pharmacist and her husband.

The book had every chance of falling into a dull and boring read but Paralkar, like a skilled surgeon, manages to save it from the malady of dullness by keeping it alive with suspense.

Magic realism is a difficult genre to pull off but Paralkar has managed to do so with aplomb. Though Paralkar doesn’t name any of the main characters: they are called surgeon, pharmacist, her husband, teacher, woman and boy, there is no sense of disconnect with them. And Paralkar’s medical background (he is a doctor) is emphasised by the intricate detailing of the surgery, which is interesting.

The language of the book is quite evocative: “The sun was a bag of blood sliced open by the horizon, smearing the brick houses. The parched ground stretched before him, covered with a rash of dry yellow weed.”

Paralkar is truly a remarkable writer who breathes life into his characters by elevating them from sketchy creatures to the ones that readers can connect with. And in doing so he stakes his claim to that title. The book is rivetting.

The theme of the novel is both magically unreal, with a touch of absurd, and a little bit philosophical but it all ties up well with the genre of the story.

Though the year has just started and many more such books are likely to come out, I would definitely put The Wounds of the Dead as one of my top favourites of the year.