A cautious warning on what lies beyond Triple Talaq

The book though ends on a comforting thought (for some) and a rhetorical poser to the ulema. 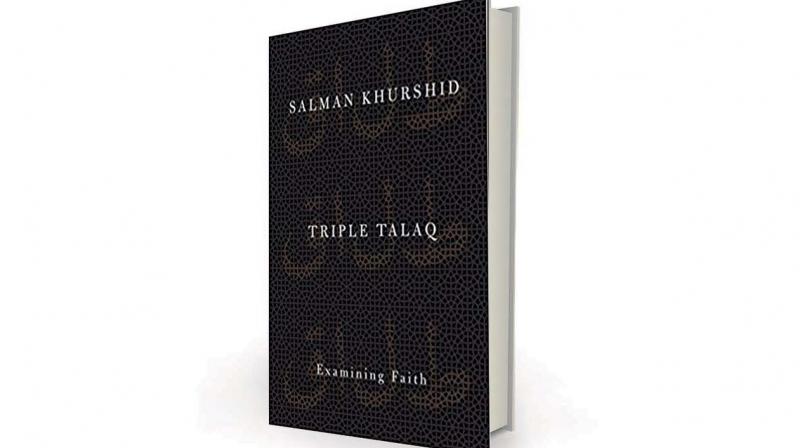 For those interested in or even somewhat familiar with the subject, there is little new in Salman Khurshid’s book, Triple Talaq: Examining Faith. And that is what is problematic. The longest chapter in the 242-page book consists of excerpts from the August 22, 2017, judgment of the five-member constitutional bench of the Supreme Court in the Shayara Bano case. The second longest chapter is an elementary exposition on the sources of Shariah law, which includes Personal Law.

Between them, the two take up half of the book, giving out information that is easily accessible on the Internet.

What remains is largely a message for reform pitched, at one level, at the ulema, and at another at the entire community, but in such guarded language that the message is in danger of getting lost in transmission. One can’t entirely blame the lawyer-politician for he is, after all, in the vote-gathering business. Mr Khurshid needs to keep both his party and the Muslim clergy happy. So, for example, he goes out of his way and devotes several pages to an ingenious defense of the All India Muslim Personal Law Board’s response to the Shah Bano judgment (1986) and the then Prime Minister Rajiv Gandhi’s decision to bend the law of the land to meet the Muslim demand.

The author fully subscribes to the Indian version of secularism where, according to him, “instead of keeping religion out of politics, we sensibly give equal respect to all religions”. It follows from this that people of different religions should continue to freely follow their own personal laws. In fact it is “imperative” that such practices are defended on “moral and constitutional grounds”, he writes. However, “what Personal Law exactly is, needs to be discussed”, he adds.

In the course of arguments, however, the Narendra Modi government attacked all forms of unilateral divorce and declared its intent to enact a new law for divorce among Muslims. This, the author argues in his book, was the BJP-government’s frontal assault on Muslim Personal Law. Wisdom demanded that the Board “concede a battle to win a war”. In any case, “Triple talaq was never such an important element of Islam or a Muslim’s iman that, in making the decision to actively defend it, we should have put the entire edifice of faith in peril”.

With the August 2017 decision of the Supreme Court “setting aside” the practice of triple talaq, the battle is lost while the war rages on in the form of the Muslim Women (Protection of Rights on Marriage) Bill, 2017, which, having sailed through the Lok Sabha, is currently stuck in the Rajya Sabha.

Meanwhile, in January-end a triple talaq victim from Mumbai’s Nalasopara filed a writ petition in the Bombay high court, seeking abolition of the practice of triple talaq, nikah halala and polygamy in the Muslim community.

Triple Talaq: Examining Faith book cautions the community against what lies ahead, but in a highly cautious manner, tip-toeing around issues that are crying to be addressed, dealt with head-on. In his written submissions before the apex court, which the book reproduces, the lawyer-politician rightly opines that “Triple talaq is no part of Shariah.” And yet he deploys the conceding-a-battle-to-win-a-war idiom as if it is merely a question of tactics, not principle.

The author describes the Board as an “authoritative body of eminent scholars (ulema)” and “other eminent persons”; its women members as “all very distinguished and dedicated to the cause of Islam”. What, pray, is so eminent or distinguished about scholars who justify a blatantly unjust, inhuman and anti-woman practice such as triple talaq?

In sharp contrast, Mr Khurshid runs down the breakaway All India Muslim Women’s Personal Law Board as a body that “seems to be packed with women activists determined to challenge the dominance of men in the voice of the Muslim community”. Is challenging male dominance such a bad thing?

The author urges the ulema to proactively initiate reform lest the nikaah halala and polygamy matters also get decided in the courts. But here too, he is soft-peddling, choosing to say not a word about the fact that nikaah halala has today been reduced to a large scale sex-for-cash-service in which the woman is made to pay for her own degradation to molvis and muftis who legitimise it. The book though ends on a comforting thought (for some) and a rhetorical poser to the ulema.

The comforting thought: “Quick upon the heels of Shayara Bano came the historical nine-Bench privacy judgment, which has widened the scope of fundamental rights far beyond their previously assumed contours… the court’s (majority) finding (in the Triple Talaq case) that Personal Law is a fundamental right opens up vast avenues for the future”.

The poser to the ulema (not in the author’s words): You are forever fuming over the prospects of a Uniform Civil Code. But you never tell Muslims that except for some family and inheritance matters, in all other aspects of life all Indians, Muslims included, are already governed by the same uniform laws of the land? Why?

The writer is co-editor of Communalism Combat and general secretary, Muslims for Secular Democracy