As the author says, Hit For A Six is for six to 16-year-olds; for new readers as well as the bookworms. The plot is good and the language simple. 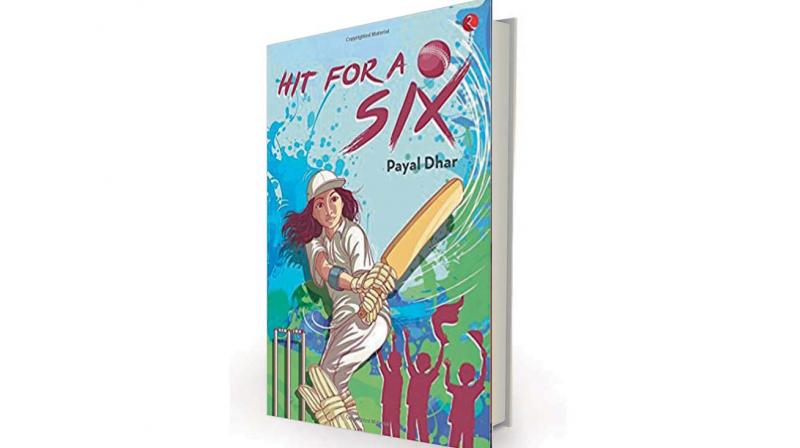 Set in the small town of Chandnisarai, Hit For A Six by Payal Dhar is a story about cricket, friendship as well as mystery. While cricket and friendship come out in the open in the first chapter itself, it is the mystery that is not unravelled till the end that makes the book interesting.

Protagonist Laila is just like any other 13-year-old girl you come across in your neighbourhood. She is fun-loving and friendly but there are times when she just wants to shut out the whole world. That’s why she visits the old Marshal’s house, a quiet corner there which she has turned into her den. Like any other normal teenager, you would say. True. The rest of the characters are relatable too; her friends and school mates are just ordinary girls. The friendship between these young teenage girls has been portrayed quite realistically: they talk about fashion, books, sports and the ragging that happens at their school, Rosebud Academy.

Laila is an ardent cricket fan but when her favourite player, Sunil Saifi, admits to match-fixing, she kind of gets averse to the game. So much so that she feels that she will never be able to love the game again. But then the cricket ground in her school gets some unknown benefactor which not only makes it a centre of attention but also renews Laila’s interest in the game. More so, she finds out that her school is going hold the town’s first ever girls’ cricket club. Can it get more exciting than that for a cricket fan? Is Saifi really the villain he has been made out to be? Can her hero’s betrayal and Laila’s love for the game really coexist? Who are the anonymous benefactors who have sponsored the renovation of Laila’s school? Why is it that the new girl in the school, Jasmine Barua who is an excellent cricket player, always grumpy?

Another mystery revolves around the “Old Mister Marshal’s” House, the old historical building. Laila and two of her friends, Prahati and Shalini, pick this house for their class project, partly because Laila wants to know about this house and partly because she thinks it might make it a good project and fetch her good marks. In the process of gathering information, Laila again faces scores of questions. Overtly, the questions appear unrelated but the answers all point in same direction. Marshall’s house dates back to the 19th century. It has a lot of historical importance and beholds many secrets. What’s more, town people believe it to be a haunted one! So what happens when after having been abandoned for decades, a family comes to live here. Now, the moving in of new people not only makes Laila lose her secret hideout but also intrigues her. Why would anyone come to live here, spend money on refurbishing it and then not even mix up with society? Why is the new family so secretive? What is the secret behind the new owners of Laila’s erstwhile secret hideout? All of this will make it a nail-biting mystery for the young readers.

As the author says, Hit For A Six is for six to 16-year-olds; for new readers as well as the bookworms. The plot is good and the language simple.

The book is just 152 pages and doesn’t take much time to finish. I finished it in less than two hours. In fact, my 12-year-old took just two days to read it cover-to-cover, and she did so while her exams were on, and she simply loved it. That speaks volumes for the book. Doesn’t it?