Review of 'The Shoemaker’s Stitch: Mochi Embroideries of Gujarat in the TAPI Collection' By Shilpa Shah and Rosemary Crill 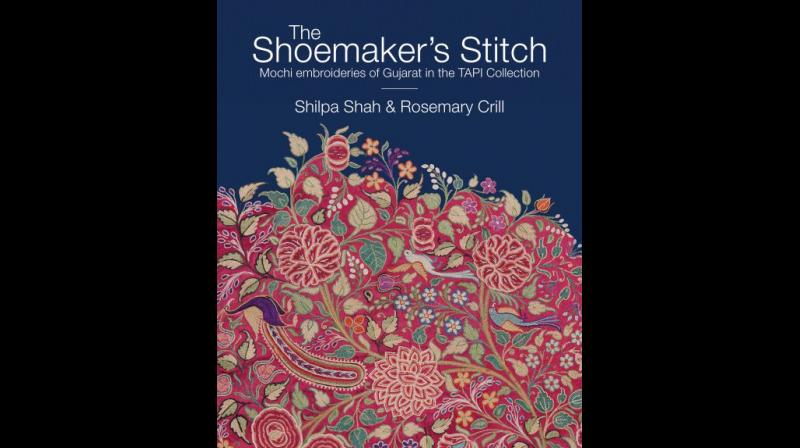 Cover photo of 'The Shoemaker’s Stitch: Mochi Embroideries of Gujarat in the TAPI Collection' By Shilpa Shah and Rosemary Crill (Photo By Arrangement)

Despite having  a profusion of excellent photographs of embroideries, The Shoemaker’s Stitch is not just a coffee table book about the chain stitch embroidery from Gujarat, known as “mochi bharat”. It contains excellently researched, invaluable knowledge about the craft, its origins and its current status.

Rosemary Crill, an expert on Indian textiles, and the author of four books on Indian embroidery, traces the origins of the craft. In the opening chapter of the book,  she discloses the originators of this type of fine chain stitch embroidery were “mochis” or cobblers of Kutch.  Speculating, Crill writes, perhaps the art was learnt from China, as earliest examples are Chinese, from the Warring States period (475-221 BCE), but the art could also have evolved “as an independent development” as the stitch is used in Bengal too.

Using a wooden handled tool “aari”, the leather craftsmen at some stage started embroidering on textiles too, leading to the spell binding examples reproduced in the book, from the V and A Collection UK, but more profusely from the TAPI Collection. (The Textiles and Art of the People of India was set up in the 1980s by Praful Shah and his wife, Shilpa). These include textile panels on the palace walls in Bhuj,  an amazing tent from the Dhrangdhra collection, items of clothing, cushion covers and much else. The embroidery was sought after not just in other parts of India but was also exported in large numbers.

Shilpa Shah in her chapter, informs that the ‘mochis’ of Kutch lived in their own street in Bhuj named “mochi sheri”, from around the 18th century onwards. Patronised by the Bhuj rulers, the artisans lived in close proximity with other craftsmen of wood, metal and ivory, leading “to a rich exchange and transmission of motifs.” Sadly, today, the community is no longer linked with the craft that bears its name — after the earthquake of 2001, there are just four families, none of whom is a practitioner of the craft. Karsandas Gopalji Jhansari who passed away in 1937 or 1938 was the last ‘mochi’ embroiderer in the service of the Bhuj ruler. The techniques continue to be used, women are now being trained in the craft and a shop established in 1866 continues till today, in the same spot, though it has now been somewhat incongruously renamed Priya Sarees.

The book has been published by Niyogi books, comprising 216 pages. There are three highly informative chapters, and several truly spell binding photographs, showing products of a truly refined, intricate ornamentation now only seen in museum collections. As Shah writes “the term ‘mochi’ embroidery unarguably retains its cachet as a paradigm for the finest chain stitch embroidery to have originated from India… their baton now having passed onto ‘aari’ work craftsmen of communities outside Kutch.”