A little more humour would have done the trick

The depiction of Priya and Chirag’s deathly dull and boring marriage works well, though. 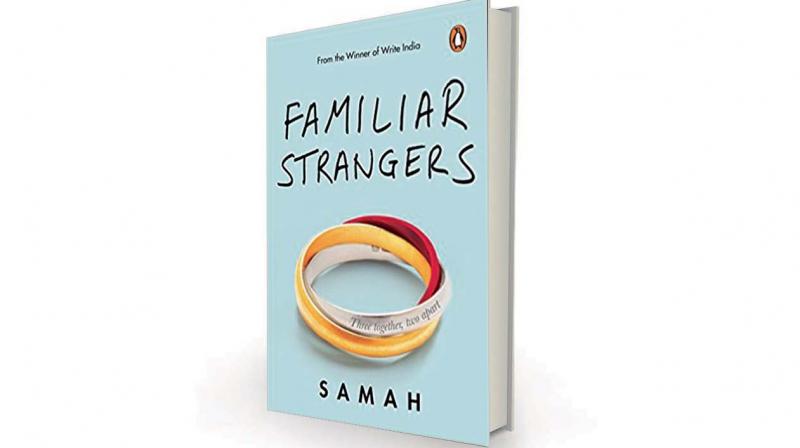 The market for popular fiction in India is growing as rapidly as Jack’s magical beanstalk. The demand is great and the supply appears to be greater: it seems like everybody wants to be a writer along with their day job, and that’s fine. Publishers welcome it as well, and it’s a win-win situation with invites for book launches flooding inboxes as often (and as annoyingly) as “Link-your-aadhaar-card-to-XYZ” spam. I just have one little wish: if only publishers were a little more discerning. There are just a few books that have that magic touch (understandable). Then there’s the just-about-okay lot and the so-bad-it-makes-you-want-to-cry category.

Familiar Strangers falls into the just-about-okay lot. It’s about an ordinary modern couple (Priya and Chirag) who have an ordinary marriage that falters after a few years in the ordinary way. Now, if only it had been written in an extraordinary manner, the book may have stood out. While it’s unfair to expect another Madame Bovary (this is popular fiction, after all), it would have been nice if there had been some compelling reason to turn the pages. There’s a barely-there plot: marriage in the doldrums post-baby; a very scary party looming ahead with Chirag’s ex as a guest; a worried and threatened Priya. The fact that Chirag’s ex is married and lives abroad, and they haven’t communicated since the break up doesn’t alleviate Priya’s fears one bit.

The depiction of Priya and Chirag’s deathly dull and boring marriage (with constant bickering thrown in) works well, though. A few chapters in, and you’re as bored of the marriage as they are — you really feel it. There are pages and pages of dealing with the house help, entering and exiting bathrooms, buying vegetables, deciding which takeaway joints to order dinner from, looking after the child in a perfunctory manner, sneaking glances at laptops/cell phones that don’t belong to you, et cetera.

Unfortunately, there’s precious little humour — that could have been a saving grace. As for the conversations, they don’t lift the book — they are banal, and just don’t get better than this:

“‘Hi!’ Priya said loudly as soon as she spotted Sakshi.

‘No ya, where! I hope by next weekend I get into all the clothes I bought for the party.’”

Notwithstanding all that, Familiar Strangers manages to make it to the just-about-okay category because of several reasons. Priya’s self-awareness is one of them: “As soon as she became a mother, Priya took to the art of worrying. Chirag always found her worrying about their son, about the house, about work, about bills and fees, about pills and keys… Sometimes she heard Aryan cry even when he was fast asleep. Stress permanently settled on her face. Her laughter became restricted, her enthusiasm in bed diminished. She stopped reading. She gave up painting. She forgot about her lipsticks. She forgot about her friends. Way before Chirag lost interest in Priya, she lost interest in herself.”

The fact that Priya knows exactly where she went wrong does help the story along. It makes her likeable and easier to relate to. And you do feel a little sorry for her when you read this; “When Sakshi first invited Priya and Chirag for a three-day stay over a long weekend, Priya was thrilled. It had been a while since she had stepped out of the city — more than a year in fact. They had taken Aryan to Gir National Park the year before. They saw vultures and pythons. Aryan got sick twice. And slept a lot. Chirag watched a different TV set with the same enthusiasm. Priya had sipped many cups of coffee alone in the balcony of their room.”

Then there’s a little passage that proves the author can be witty and tongue-in-cheek if she chooses to: “Now it was time for her to get ready for work. She grabbed a cream shirt and brown trousers from the top of the pile that had just been ironed. This was a habit. Everyone in her office knew what Priya wore to work on Monday would be worn again the following Thursday.” A little more of this may well have been lovely.

Frequent references to the bathroom were puzzling till it was explained later that this married couple who made a baby together were suddenly shy of changing their clothes in front of each other. Nice touch, but it needn’t have been hammered home with a bludgeon.

All in all, this isn’t a “must read”, but it would serve well for two kinds of readers: singletons who have impossibly romantic notions about marriage and need to be brought down to earth, and people dealing with boring marriages — it always feels good to know that you’re not alone in your misery. I wouldn’t write off the author at all: the style is decent and the techniques are good. All that was wanting was a plot — a good, strong, sturdy plot to hold it together. Failing that, a lightness of touch instead of relentless earnestness.