The bells tolled on the Kozhikode (Calicut) beach for four days last week for a different reason. 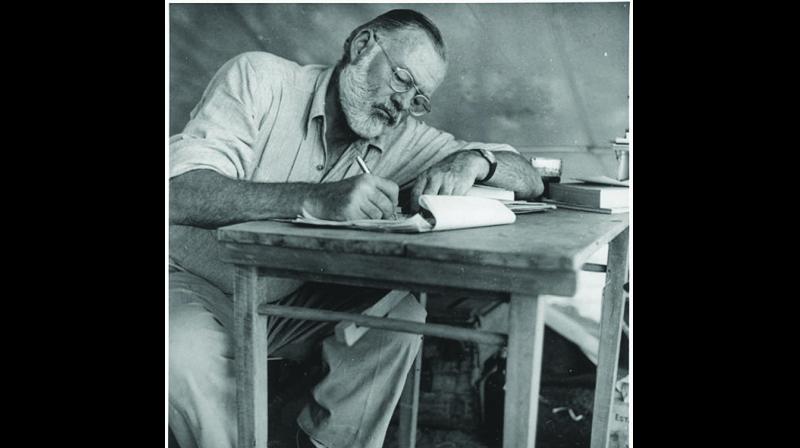 For Whom the Bell Tolls was of course the iconic novel by Ernest Hemingway published in 1940. Written in the context of the Spanish Civil War, it was in many ways, a call to arms by an international brigade to support a democratically elected government in Spain against the forces of fascism. Many idealists answered the call, including the novel’s protagonist, Robert Jordan, who joins a republican guerrilla unit in the war. Thus, at the time, one was to answer Hemingway’s poser, “the bell tolled for thee”, as the bells were supposed to rouse the conscience of the international community against the forces of fascism.

The bells tolled on the Kozhikode (Calicut) beach for four days last week for a different reason. The occasion was the Kerala Literature Festival. It was a festival to celebrate books, reading and discussion. And the bells were answered by book lovers and readers who thronged all six venues of the beach festival in large numbers on all four days. It was perhaps the most democratic and ease-of-access festival. The theme of the festival was on conversations that matter. Along with these, opinions, access to books and interactions with authors and writers took place, not only in the designated forums, but also in the public spaces outside.

Ironically, all this was happening when there was an eminent panel discussing the very issue of “Are literary festivals overrated?” A singular merit of literary festivals is access of readers to their favourite writers. While this may seem commonplace in other cultures, in India this is getting increasingly difficult given the way we publish and disseminate books. Most books are sold through distributors and reach readers either through bookshops or online retailers. Publishers’ launches too are rather limited and confined to bestselling authors. The avenues for publisher-reader interaction are actually getting constricted. Book fairs used to provide the space earlier but of late, they have had to put up with limited space and increased footfalls. The recently concluded book fair in New Delhi is an example of this. Situated in a cramped and limited hall space at Pragati Maidan, where reconstruction is in full swing, it was only the bravehearts who ventured forth to pick up books. The buyers who dived into the crowded stalls to emerge an hour later rather dishevelled but with a triumphant purchase deserve to be commended. Stall owners did not complain as more footfalls meant more business even if a few books did mysteriously disappear!

Under these circumstances, it was impossible to access authors, leave alone having a conversation with them. But the KLF was a festival with a difference. Authors made it a point to mingle with their readers, and if the speaking forums were a trifle overcrowded, the authors accessed readers in less formal areas and sometimes even along the scenic waterfront.

All this was very evident in the Book Talk, a discussion around M. Mukundan’s The Bells are Ringing in Haridwar. Mukundan is a bestselling author in Malayalam where one of his books is now in its 54th edition. The occasion was the launch of the English translation of The Bells and on the panel with him were his translator Prema Jayakumar and his publisher Dinesh Sinha. The Bells had been published in Malayalam in 1972 and the publisher had added two more of Mukundan’s novellas The Naked Lord published in 1989 and Savitri’s Girdle published in 1992. When The Bells was first published in 1972, it had created a bit of a sensation in the then conservative Kerala society. As the novel’s protaganist Ramesh Panniker was prone to taking drinks and drugs, self-righteous commentators accused Mukundan of encouraging the youth to take drinks and indulge in substance abuse. Perhaps they had heard of Mukundan’s slightly bohemian lifestyle in Delhi. He worked for 36 years in the French Embassy, and when he retired, the then
French ambassador gifted him 36 bottles of French wine, one for every year of service!

Mukundan too pulled no punches at the discussion. “You had to be mad, a little out of your mind, to write a book like this,” as Ramesh in the novel undergoes some surreal experiences in Haridwar that alternate between hallucination and reality and that change his life forever. Mukundan also spoke of his own two worlds of existence, one of the prim and proper official of the Embassy of France on all working days and the other of a more relaxed and carefree life on weekends and on holidays. But the real and ostensible reason that Mukundan participated in the KLF was both to access and interact with his readers. The other two novellas Savitri’s Girdle and The Naked Lord portrayed a feudal order where the two lords Meethaledath Ramunni and Kunhikrishnan Thampuran with impeccable reputations are shown to be weak and vulnerable in their relationships with women.

Mukundan exposes the hypocrisy in human relations, and his descriptions are vivid and evocative. In The Naked Lord, Thampuran loses his clothes while almost caught sleeping with a woman, loses his clothes and has to hide in a quarry to save his own name. In Savitri’s Girdle, Ramunni walked just so. “He held the corner of his mundu with his left hand and walked with an umbrella in his right hand, planting its tip on the ground with each step”. Yet this man is so mesmerised by a woman’s golden girdle pledged to him by a debt-ridden husband, that he has to run his fingers and caress it everyday. His only obsession was to tie the girdle around Savitri’s waist, the wife of the debt-ridden husband.

All the books had been written over a considerable span of time and the launch of the books in English provided Mukundan with an opportunity to interact with his readers and find if the books still resonated with them. To his delight, they still did, though this was a much younger audience and probably not even around when the stories were first published. The questions came and the discussion continued even after the formal session was over, at the signing session where fans lined up to get the books signed and get “selfies” clicked with the author.