Controversies had followed Desai right from the time he had entered the public arena in the 1920s. 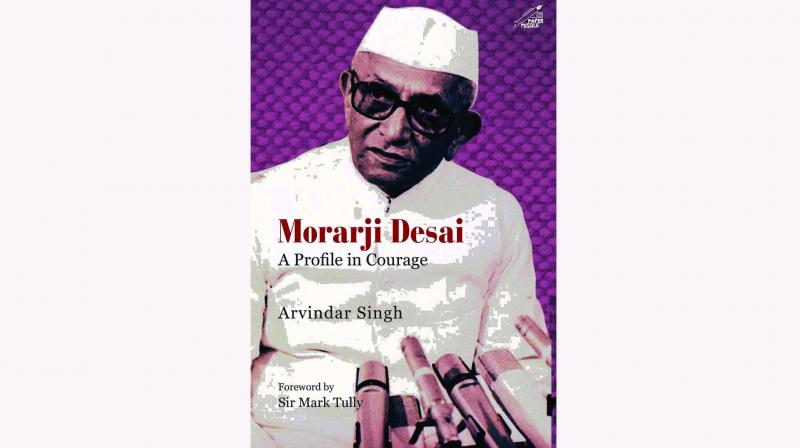 Morarji Desai, the Janata Party leader and the first non-Congress Prime Minister, whose becoming Prime Minister in 1977 had aroused huge expectations from the electorate, particularly the students and youths of the 1970s, has undoubtedly left more critics than admirers.

Twice denied prime ministership by the Congress, once after the death of Jawaharlal Nehru and then after the demise of Lal Bahadur Shastri, Desai, at the age of 81, was chosen for the premiership by Jai Prakash Narain (JP).

The Janata Party government was supposed to usher in a “Total Revolution” in all spheres of public life as propounded by JP, who had provided the leadership to what had initially started as a student’s agitation and later assumed the shape of a pan-India mass movement against Indira Gandhi’s dictatorial Emergency regime.

JP’s slogan had caught the fancy of vast segments of the electorate, barring southern India, and had resulted in a decisive mandate in favour of the Janata Party. It made many believe that this was the end of Indira Gandhi’s political journey and of one-party national domination. But, it was not to be.

Barely three years later, she staged a comeback with an equally decisive mandate. Fed up with the Janata Party experiment, people were willing to forgive all of her government’s misdeeds, including imposition of the Emergency.

JP’s “Total Revolution” was forgotten. So was JP.

Morarji Desai came to be regarded by many as an obstinate, conservative, self-righteous leader obsessed with himself and his ideas (including propagation of urine therapy). The author, Arvindar Singh, who had closely observed Desai for a considerable period, has tried to portray the veteran Gandhian as a misunderstood man who was a victim of political machinations — during the Nehru, Shastri, Indira or even Janata regimes. The book gives Desai’s versions of events spanning over four decades.

However, it fails to generate sympathy for Desai. No doubt, the Janata Party experiment failed because it comprised parties pursuing different agendas and pulling the government in different directions. But Morarji was no saint either. Not only had he failed as a team leader, but he had also (unsuccessfully) played his own games to remain in power.

To cite an example, his government had lost majority in Parliament after the Charan Singh-Raj Narain group walked out of the Janata Party in 1979. He resigned but subsequently made another bid for the prime ministership. The list of supporters he submitted included the names of Congress MPs. The author tells us that Desai had submitted this list under “pressure of time” as he was “shouldering responsibilities of a caretaker government.” He had left the task to other leaders!

After he was denied the opportunity, Morarji announced his retirement from active politics to “atone for the lapse” of submitting such a list. The then President N. Sanjeeva Reddy invited Charan Singh, who had the support of the Congress, to form the government.

Desai later attacked Reddy, who was not his choice to become the President. He had favoured candidature of a renowned dancer, Rukmani Devi Arundale, against the overwhelming support in the party for Reddy, as Indira Gandhi had got Reddy defeated in the previous presidential polls. A nugget of information: Reddy and Desai had not gotten along after differences over the transfer of a petty official in the past!

Controversies had followed Desai right from the time he had entered the public arena in the 1920s. He was personal assistant to the district collector of Godhra when he was indicted by an enquiry committee for his alleged “partisan behaviour” in a communally surcharged issue. He quit the state civil service and joined the freedom struggle. During the civil disobedience movement in 1931, Mahatma Gandhi had volunteered to talk to the Viceroy to take Desai back into government, which Desai had turned down. Gandhi also ensured a pension from the government for Desai, which he gave up after becoming a minister in the Bombay province later.

After Independence, Desai had held the home portfolio in the B.G. Kher government. Despite losing the 1952 Assembly elections, he was chosen by the Congress to succeed Kher. His tenure was marred by the incident of police firing on Samyukta Maharashtra activists protesting against the Congress Party’s decision to keep Bombay city out of proposed Maharashtra in which over 100 activists were killed. The author claims that Desai had turned down Nehru’s suggestion to deploy the Army to pre-empt the riotous situation.

Controversy goaded Desai even after he quit politics with Pulitzer Prize winning journalist Seymour Hersh accusing him of being in the CIA’s payroll from the time of the Johnson presidency. Even his detractors would not believe the allegations. The author has cited many credible facts in Desai’s defence. But, Hersh was acquitted in the legal dispute in a Chicago court and Desai did not go for an appeal, the author says, “as the US libel laws stacked the odds against him. Also his inability to appear in person would have affected the case further, not favouring him”.

In balance, Morarji will be remembered as a symbol of the tumultuous times that the country lived through during the Emergency and its aftermath. In the foreword to the book, Sir Mark Tully, British journalist, notes that the downfall of the Morarji–led government has meant that its achievements have been forgotten and remarks that much of the credit for those achievements must go to Morarji. The most significant of these was the re-establishment the rule of law. The Constitution was amended negating the anti-democratic laws of the Indira Gandhi government and it was ensured that imposition of Emergency by any future government became almost impossible.

The present book is an update of the one brought out in 1995 to coincide with Morarji Desai’s birth centenary. It carries tributes paid by eminent jurist Nani A. Palkhivala, India’s ambassador the US during the Janata regime and also former PM Atal Behari Vajpayee, who was the foreign minister in the Desai government.

The writer is a senior journalist based in New Delhi