Light, breezy and witty, “Kama’s Last Sutra” is an enjoyable book to curl up with. 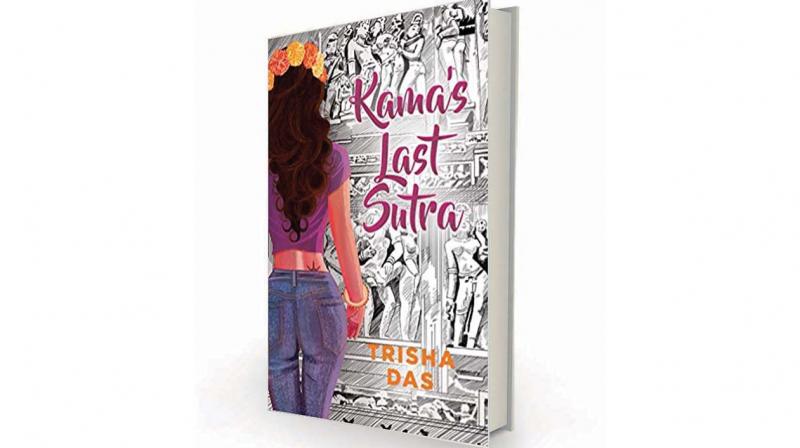 What happens when a sassy, independent, working woman from the 21st century time travels to 1022 CE and develops a crush on a handsome 30-something king from the Rajput Chandela dynasty?

Archaeologist Tara who is working at the ancient remains of Khajuraho temples finds herself in this unenviable position. Tara already has a crush on her former Columbia University professor Hari Varma, who heads the Khajuraho dig team. It appears to be unrequited love, however, as Hari has not exactly been hot in pursuit. The story starts at the site with historical facts and legends thrown in, but it’s not a yawn-inducing read because Tara’s reactions to them are rather witty. Take her response to the legend of Princess Hemvati who was seduced by the Moon God while bathing in a pool at night. Hemvati became pregnant, relocated to Khajuraho out of shame and her son, Chandra Varman, built the temples to atone for his mother’s sins:

“Then I blurted out, “So what was her sin exactly?”

The man looked embarrassed. “She...consorted with the Moon God.”

“But I thought you said she was having a bath and he was the one who came down and seduced her?”

Hari intervened at that point with a, “Right. Thanks for that. Can we get back to business...” and changed the subject while our storyteller glared at me.

When Tara is hurled back into time by an old, seemingly harmless woman, she’s distraught and has a series of jaw-dropping adventures that start with her attacking a Brahmin priest for molesting a young devadasi, and ends with a courageous attempt to protect Vidyadhara’s kingdom from Mahmud of Ghazni. There’s no slackening of pace in the middle either, with Tara pitching in to help a noblewoman give birth to a baby (falling back on what she had once seen on a maternity reality show while channel surfing), finding herself in the middle of petty jealousies in Rani Mahal, and being labelled as the king’s favourite concubine (to her horror).

Lots of things make Tara shudder: like the fact that the king is fed tiger meat to make him stronger, and is gifted necklaces made out of its teeth: “Too bad the teeth didn’t make this particular tiger invincible, I thought, cringing in shock and disgust. A thousand years from now, tigers would be an endangered species because of this kind of habitual disregard.” Then there’s the constant reminder that sati is prevalent: “I saw a number of red vermilion handprints on the wall... The handprints were sati marks — left by women who were on their way to jump into their husbands’ funeral pyres. The sheer number of them astounded and repulsed me. And reminded me why I had to go home. Urgently.”

On the flip side, Tara gets to ask a question she’s always wondered about: Why are the temple sculptures so kinky? When Vidyadhara shows her the latest sculpture on a temple that’s currently being built, she gasps and calls it obscene. “To my surprise, Vidyadhara laughed. ‘Why do you think it’s obscene?” I gulped and looked up at his face. He didn’t look the least bit offended. In for a penny... I soldiered on. “Well, look at what they’re doing. Even if you discount the fact that you need to be an acrobat to actually get into that position, how can you do it in front of other people, with other people simultaneously? It’s a private act, between a couple. Or at least it should be.”

Vidyadhara’s smile had got wider as the words tumbled out of my mouth. By the time I had finished, it was a teasing grin. “Why should the act be private, Tara Bai?”

I wanted to slap that grin off his face. “It’s kinky.”

Perhaps Tara gets her answer, or perhaps she doesn’t after an amazing yogic sex-transference experience, when Vidyadhara makes out with his second wife in her presence. While she’s still a virgin, she’s definitely not an “orgasm virgin” anymore.

What makes Vidyadhara a likeable hero is that while he always looks at Tara with naked lust in his eyes, he repeatedly assures her that he’d never touch her without her consent: “I told you, Tara Bai”—his voice was low—”I don’t force women.” He tears into his son when he rapes a teenager and orders the girl’s grandmother to hit the prince with slippers. Tara is torn. She can’t help being attracted to him, even though he has two wives, twenty-three concubines, an army of courtesans, dancing girls, and more to trifle with. Oh, and he also is in the process of marrying again — a 10-year-old bride at that! “I knew I couldn’t judge a man of this time by modern standards, but I couldn’t help myself.”

Light, breezy and witty, “Kama’s Last Sutra” is an enjoyable book to curl up with. Now if only Das wrote scripts for historical Indian television series as well, I wouldn’t cringe when my grandmother watches them.