Three friends and a date with the devil

Taking a departure from his Angry Maushi-style-of-writing is a risk that Abhijeet is willing to take. 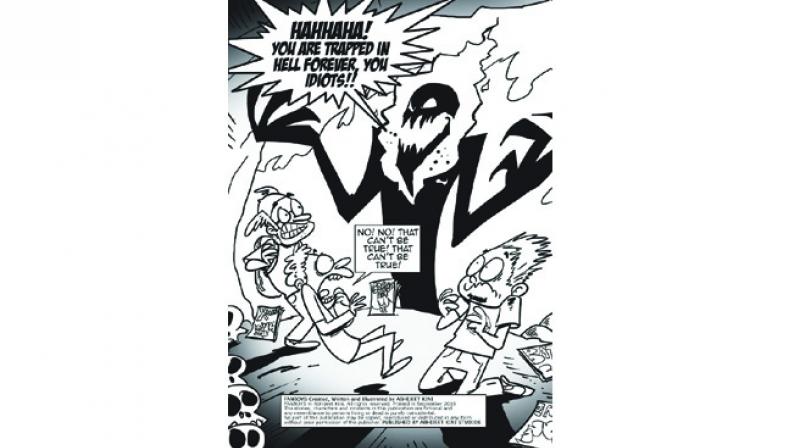 The plot for the comic book goes something like this — three friends who aspire to attend a Comic Con convention instead land a date with the devil.

Abhijeet Kini’s Angry Maushi, the sari-clad vigilante who is out to avenge the baddies, instantly became a favourite among comic book fans. The independent comic artiste has retired the satire comic for his next project. Titled Fanboys, the black and white comic book will focus on comics, pop-culture and of course, comic buffs.

The plot for the comic book goes something like this — three friends who aspire to attend a Comic Con convention instead land a date with the devil. “Buddy movies as a genre have always interested me. The three friends on the road till something goes haywire is a classic story line, and gives you so much freedom to experiment,” explains Abhijeet.

Although the comic digest took Abhijeet nothing more than eight days to produce, he admits that the idea “marinated” in his head for a few months. He says, “The idea was always at the back of my head. Once I put my thoughts to paper there was no looking back.”

Abhijeet made a conscious effort to do away with crude language, political spoofs, underlying messages — a mainstay in Angry Maushi — which he admits, took quite an effort. “I have attempted to make the content fun, and thrown in a few pop-culture references and geek humour. Though it was quite a challenge to steer away from offensive language,” he jokes.

Taking a departure from his Angry Maushi-style-of-writing is a risk that Abhijeet is willing to take. He says, “A lot of readers have asked me if there will ever be a crossover between Angry Maushi and Fanboys. I always tell them that the two belong to different worlds. ”