A mature thriller rooted in an unforgiving setting

Most of the characters are terribly unpleasant and seem to dislike each other as well. 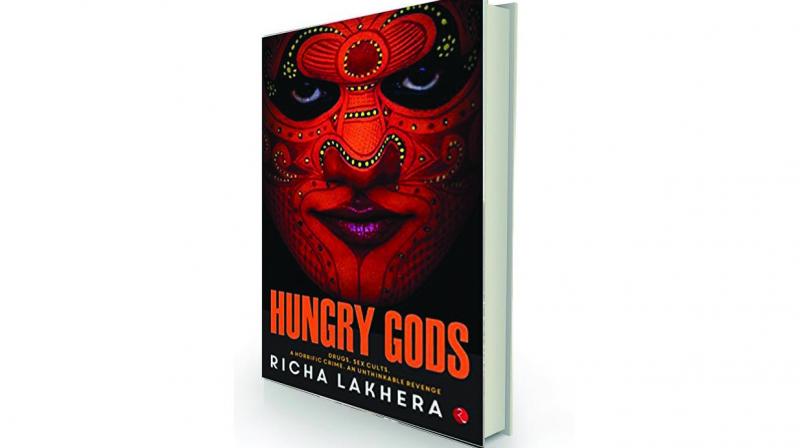 Drugs. Sex cults. A horrific crime. An unthinkable revenge.” These are the words that scream at you from the cover of Hungry Gods. For a change, this is no hyperbole: this honestly is what the book is all about. The story opens with a young man witnessing his mother’s gangrape and murder. He grows up seeking revenge on the perpetrators, and wants to find out exactly why she was killed. Employees of Medici, a huge pharmaceutical company that set up a factory in his village may well be responsible for it: “They (the villagers) don’t believe me that an invisible poison is settling in our soil and it’s coming from the factory waters. It is coming from the chemicals they use in the factory.” The plot is strong as simple. Now on to the characters who make the revenge tale move forward.

Most of the characters are terribly unpleasant and seem to dislike each other as well. There’s Ranganathan, head of legal affairs and brand development at Medici. He’s a paedophile who preys on street urchins — and practically everybody in the organisation is aware of it! Superstar Neville Valentine is Medici’s brand ambassador. His outrageous sexploits often make the news on social media, and Ranganathan tries in vain to rein him in — the company’s reputation must not be stained. Valentine’s assistant Binky Mendez has a near pathological loyalty to him: “Years ago, Binky had earned Valentine’s lifetime of goodwill with an act of devotion: a virulent critic tweeting a damning article on the star found himself the object of net vendetta of such prurient nature that he had to close his account and tender a personal apology to the star.”

Valentine is at odds with Dinesh Thackray (a terribly famous director) who has signed up to direct Medici’s TV drama. His daughter Rathi Thackray (a drug addict and mediocre actress) hates her father for many reasons: “Her father never had the conventional fatherly concerns about her stepping into oncoming traffic or accepting candy from strangers or, later on, her ample drug misadventures and rehab trips. When she turned her attention to films he was non-committal and forgot to attend her debut premiere, but had cruelly tweeted: ‘Rathi’s acting is without passion, but she will earn money.’” If this wasn’t bad enough, Rathi discovers worse things about her father as the plot moves along.

Meet someone who hates everyone — Hiri, a prostitute and drug addict who has lost her mind. She lives with her daughter Este in a shady part of town and is filled with vague memories of bitterness and hatred. Este (also a drug addict and prostitute) has a baby who may be related to one of the characters. You may find yourself playing a little match-the-fathers-to their-daughters game from the second half of the book.

Sadly, all the characters come across as caricatures (and not charming ones at that). Even the two who are remotely (very remotely) decent are not fleshed out enough to make us feel any empathy. The first is Boy: Valentine’s make up and massage man. The second is journalist Molly Limaye, who is on Medici’s trail. “This time what she is dealing with is not some run-of-the-mill fraud or some low-level espionage stuff. She is messing with a powerful and deep-pocketed company.” Molly is bemused and continues to be bemused.

Dorab Silva, the main police officer on the case, has a perfectly good sob story, but his actions make your sympathy evaporate. His subordinate, Junior Inspector Gouda, seems far sharper than him and certainly has more integrity. The chemistry between the two cops, however, is decent — thanks to Gouda’s wit. If only he was brought in more often!

Hungry Gods is a thriller that may have been far more thrilling if the author had kept it simple. Complicated sentence constructions and the use of words that are not commonly used are occasional stumbling blocks. What really slows the pace however, are long and boring legal documents that intersperse the story and take away the immediacy of the plot. Who on earth enjoys reading legalese? If that wasn’t tedious enough, the prose is dotted with medical and scientific terminology as well, some of which leaks into descriptions: “But Valentine isn’t feeling any different from a naïve artist who uses bitumen as a varnish to produce startling brilliance unaware that the germ of radioactivity has already polluted the solvent, leading to a destructive chemical reaction.” Unfortunately, there are far too many of these pass-the-Aspirin moments, which is why Hungry Gods loses out on that spectacular cliché favoured by reviewers across the world: “A cracker of a book!”