A tramline defined its end and the street extension beyond was called New Park Street. 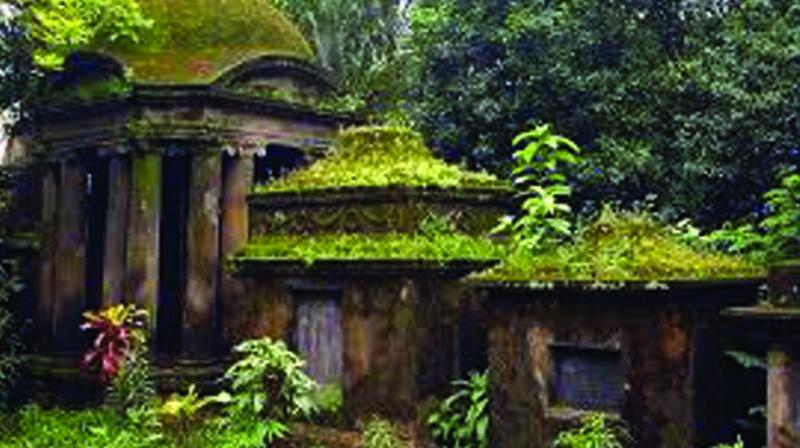 In January 2018, on a balmy winter’s afternoon, five musicians came together to play at the historic South Park Street Cemetery in Kolkata. Most cities in the world are defined by their streets made famous by their restaurants, shops (sometimes bookshops too), offices marked by architecture and design and even stately homes. For many of its denizens that grew up in the city, Park Street was the defining and iconic street in the city, the most “happening” place, and if you were not fortunate enough to own an apartment on the “street”, you stayed either just “south” or “north” of it. For many of us, the "operational" part of Park Street (though it stretched beyond) was defined by the historic Asiatic Society building at near its beginning and the iconic St Xavier’s College almost near its end. A tramline defined its end and the street extension beyond was called New Park Street.

Those who are in agreement with the current fad for changing street names would know that Park Street too underwent change. It was first named Burial Ground Street and then Park Street. It has most recently been renamed as Mother Teresa Street after the missionary who became a saint and a succour for the destitute.

To get back to our concert. The five musicians got together to play baroque music to the dead and famous at the cemetery. An initiative by the Christian Burial Board, the five musicians played compositions by Johann Sebastian Bach and George Frederic Handel, while visitors milled around the eight-acre complex. The musicians sat in a clearing surrounded by tombs and memorials designed in both Gothic and Indo-Sarcenic style. Was the concert an attempt to wake up the dead, some of whom had become legends in their lifetime?  This could well have been a legitimate concern for the visitors who milled around as the strains of Bach and Handel rose up in the air and even as the sun was slowly setting. But the concert was one more attempt to draw public attention to a historical legacy and to make the cemetery an essential part of the city’s tourist itinerary. More importantly, the concert was to focus attention on the deplorable state of the tombs and mausoleums in urgent need of restoration and repair.

The Christian Burial Board maintains five cemeteries in Kolkata and spends an annual sum of 15 lakhs on the maintenance of the Park Street cemetery. Opened in 1767 in what was previously a marshy area, the Europeans had stopped using it in 1790. Due to the scarcity of land for burial, it was opened up again and burials continued till the 1830s with the reburial of one of the most iconic figures of the Bengal Renaissance, Henry Vivian Derozio. Derozio, the founder of the Young Bengal movement, was a college lecturer at the age of 17, an acclaimed author and poet but tragically succumbed to cholera at the age of 21. Out of pique and resentment at his radical and iconoclastic views but more because he was classified as an Anglo-Indian due to mixed parentage and Portuguese blood, he was initially buried outside the cemetery and then re-interred inside.

No, it was not necessary to play alluring music to wake up the famous figures buried in the cemetery. Buried they may be but their works and their deeds continue to resonate with us. Apart from Derozio, the other figures who lie under the protective custody of the Archaeological Survey of India (ASI) are Rose Aylmer reportedly among the most beautiful women in her time, George Bogle a diplomat whose historic mission to the forbidden land, Tibet, is the subject of a recent book, Robert Kyd who founded the Botanical Garden in Kolkata, Colin Mackenzie who became the first surveyor-general of India, General Charles Stuart who went “native” and is more popularly known as “Hindoo Stuart” whose mausoleum is designed as a Hindu temple and Walter Landor Dickens, the son of the novelist Charles Dickens who was initially buried in Bhowanipore and later moved here.

But perhaps the most remarkable of all the figures was William Jones (1746-1794) who enjoyed what his biographer, the Bangladeshi historian Abu Taher Mojumder, called “one of the most phenomenal reputations of all time”. Jones was born to middle class parents in 1746 but his mother soon after the death of his father saw to it that he got a good education. His capacity for imbibing knowledge and information was prodigious. At the age of 13, Jones was not only familiar with Shakespeare but had also written his first poem. The young William Jones was a lingusitic prodigy and apart from English and his native Welsh (at which he was the weakest) he had learned Greek, Arabic, Persian, Latin, Hebrew and the basics of Chinese writing. While it is popularly believed that he had mastered some 28 languages in all, he knew eight languages with critical thoroughness, was fluent in another eight with a dictionary in hand, and had a fair competence in another twelve. This was a trait with another eminent philologist Sir James Murray the compiler of the Oxford English Dictionary.

The historian Manu Pillai states in his book The Courtesan, the Mahatma and the Italian Brahmin that to some William Jones was the Persian Jones as he had translated the Tariq-i-Nadiri, for others, he was Asiatic Jones after the setting up of the Asiatic Society, and to some he was Republican Jones due to his radical ideas on popular education and universal suffrage. But it was his later life and work in India that was to secure his scholarly reputation for all time and perhaps he could be more rightfully known as Oriental or as we have called him “Indiana Jones”. He was engaged with much
more than the Sanskrit language in India but with its civilisation, culture, values and mores.

He had authored several books while in his twenties and had acquired such a reputation that he was knighted at a young age and even the King of Denmark on an official visit to England asked specially to see him. Jones’s republican ideas grew stronger after a long friendship with Benjamin Franklin who was then living in Paris.

It was his quest for financial stability and a more solid mooring that attracted him to India. “I was never unhappy in England,” he wrote. “But I never was happy till I settled in India.” This quest for financial stability was something Jones shared with another great Indologist Max Mueller who contested the elections for the Boden Professorship of Sanskrit at Oxford in 1860. The chair had just been vacated by the English Orientalist Horace Hayman Wilson. Wilson had done the first translation of the Rig Veda as well as Kalidas's Meghadoota while working as a surgeon in India. He later became the secretary of the Asiatic Society. But it was Max Mueller who would acquire the more formidable reputation by his translations of The Sacred Books of the East.

For William Jones, though the annual salary of 6,000 pounds as a judge of the British Supreme Court was attractive, he decided to continue his intellectual pursuits with renewed vigour. Though a product of British imperialism and of the colonial mind-set who justified the Raj's control over India as a “civilisational” influence, he was fascinated with its languages and Sanskrit in particular. Jones could interpret Islamic law given his knowledge of Arabic and Persian but he could not interpret the Hindu codes of law without a better grasp of Sanskrit. This was required initially for his official duties but later on, it was his love for literature that required a mastery of Sanskrit.

To rectify this, Manu Pillai records, “A Sanskrit pandit was hired at a princely retainer of a hundred rupees to give him lessons. Given Jones’ outcaste position, lessons with the brahmin pandit followed a strict protocol. They were conducted in a special room with white marble floors, purified and washed every day with water from the Ganges, lest the pandit be defiled by this impure contact.”

Jones would also have to observe ritual fasts and sometimes had to learn on an empty stomach. All these efforts paid off and soon Jones was to develop a formidable vocabulary of over 10,000 words in Sanskrit. When pandits in Benares refused to translate the Manusmriti for him, he simply published his own The Ordinances of Manu
which became a classic and was used as a standard reference.

But it was in the area of literature that William Jones was to make his mark. As Jawaharlal Nehru was to later remark, “Sanskrit fascinated him… and it was through his writings and translations that Europe first had a glimpse of some of the treasures of Sanskrit literature.”

It was Kalidas and Shakuntala that obssessed him. Translated in 1789, Jones’s Sacontala: The Fatal Ring led Goethe to declare that he would have liked to live in India. In the next hundred years there were to be 46 translations in 12 European languages. In spite of his impressive tomb at the cemetery, he had once said the best monument for a literary person would be a good edition of his works. His wife dutifully published a collection and he was the definite, literary interpreter of India to the west.