Fear, humour mix in sadly prescient saga of our times

Not just a love between people but a love for an idea that is right, that is humane, that is a counter to hate, anger and violence. 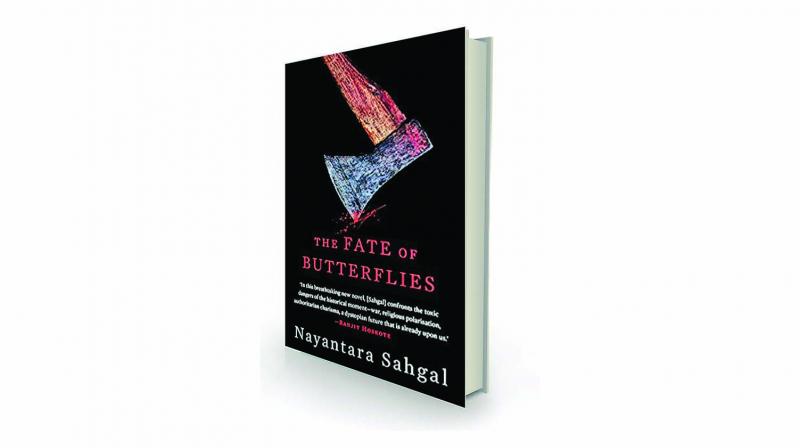 The fate of butterflies, By Nayantara Sahgal Speaking Tiger, Rs 450.

Prabhakar is not named after the ideologue whose followers are now in charge as he tries to explain. Prabhakar in fact belongs to the downtrodden masses of India, saved by Christians and allowed to shine. But Prabhakar finds that his light-hearted spoof on history has been taken seriously by those in charge of India and even worse, it has been grossly misunderstood. This is his story but also the story of a collapse of understanding and of an atmosphere of uncertainty.

Nayantara Sahgal packs into her story fear, injustice, war, anger, regression, nativism, sectarianism, even love, definitely love, and makes this novella, The Fate of Butterflies, into a metaphor for our times.

The story crosses borders but the theme remains the same: the capacity of humankind to be cruel and kind. As Sergei tries to understand India and deal with opposing thought processes within his family, he is forced to learn about his own neighbourhood's past through the experiences of Katerina as she describes how she was gangraped in an Indian village.

Prabhakar finds his world shaken by his meeting with the new fascist forces, with Katerina and her experience in India, by changes at “the kaif” where he and his friend Rahman used to enjoy their kababs made by the talented Rafeeq. As Prabhakar falls in love, India as he knew it also changes and not for the better. Rafeeq they learn to their horror has been taken to the newly formed “camps” for Muslims. The Cow Commission is in charge and you could be killed for eating, cooking, storing beef.

Through all this, Delhi’s beautiful and welcoming restaurant Bonjour, run by Prahlad and Francois, is a haven from the world outside, riven by fear and ugliness. But is it?

You could describe The Fate of Butterflies as an allegory. And like all allegories, it is very real. Sahgal’s light touch and deft writing imbue the story and its characters with both compassion and humour. But at the core of this story is fear and horror. The implacable assuredness of the “mastermind” Mirajkar as he lays out the future of a Hindu India, the confidence of the visiting representative of the “Voice of Hindu America” who wants white status for Hindus in America, are visible in the world today, and not so far from a possible reality.

Taking off from When Moon Shines by Day, published in 2017, The Fate of Butterflies reinforces the changes that were being made in her fictional India. And yet, not really so fictional. As the lynching of Muslims and Dalits on the suspicion of carrying beef, or “crossing” caste lines has continued wilfully and freely in India since 2014 and as the Hindutva movement has got an extra fillip since the BJP’s massive victory in May 2019, we know that Indian society has changed.

Sahgal has taken those changes and woven them into these two terrifying and beautiful stories. The Fate of Butterflies is even more frightening than its predecessor. The world here has changed, those who have been portrayed as the “Other” have been detained. Violence against those who do not agree is uncontested.

As Prabhakar and Sergei try to cope, the sense of hope comes from Katerina, whose inner core is still idealistic in spite of her extreme suffering. She has the courage to take thought forward, and she makes this story of India into the story of humanity, of the world.

In Sahgal’s large and distinguished body of work, both fiction and non-fiction, The Fate of Butterflies will stand apart for its prescience, its warning and for the love with which it is imbued. Not just a love between people but a love for an idea that is right, that is humane, that is a counter to hate, anger and violence. You are left both bereft and bolstered when you read it, which is a literary feat of remarkable proportions.

Remember, that all this is told in 144 pages, with not a word out of place or extraneous. Like a jewel that shines in the simplest setting.